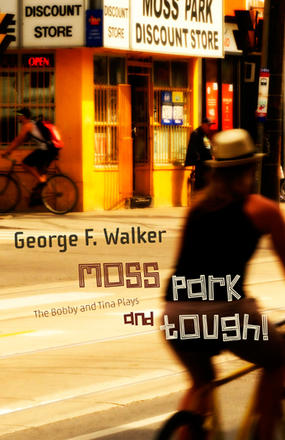 It’s been twenty years since the debut of Tough!, but only two years have passed in the lives of Tina and Bobby, the main characters. Of course the poverty trap, which grips them ... Read more

It’s been twenty years since the debut of Tough!, but only two years have passed in the lives of Tina and Bobby, the main characters. Of course the poverty trap, which grips them both, is ageless.

In Moss Park, Bobby and Tina aren’t married, or even living together, but they have a young child, and another is on the way – a fact Bobby learns from Tina early in the play. Bobby wants Tina to take him back – he’s always wanted that – but she has serious doubts about his ability to hold down a job. In this fast-paced dark comedy, Bobby’s plans for big money collide with Tina’s dreams of home, sweet home, and we root for them even as we are exasperated by them. Funny, touching, and raw, Moss Park finds hope in unlikely places.

Cast of one man and one woman.

In Tough! young Tina summons her nineteen-year-old boyfriend Bobby to a tattered city playground. She’s got something to tell him, and she’s brought her tough-talking pal, Jill, along as backup. Bobby doesn’t know what he’s walking into. In fact, he’s been planning to break up but the stakes quickly skyrocket when Tina reveals that she’s pregnant. With its sharply drawn young characters, Tough! has been a nearly continuous success in Canada since its premiere in 1993, especially as programming for younger audiences. Tough! has played to packed houses in Victoria, Vancouver, Ottawa, and Toronto. It has been translated into six languages and is regularly performed in theatres all over the world.

Cast of one man and two women.

George F. Walker has been one of Canada’s most prolific and popular playwrights since his career in theatre began in the early 1970s. Since that time, he has written more than twenty plays and has created screenplays for several award-winning Canadian television series, including Due South, The Newsroom, This Is Wonderland, and The Line, as well as for the film Niagara Motel (based on three plays from his Suburban Motel series).

Patrick McDonald is artistic director of Green Thumb Theatre, where he has directed more than seventy-five productions and overseen the commissioning and development of more than fifty new plays for children, teens, and young adults.

“The strength of Walker’s writing is his ability to depict deep pain with a light touch. ”
– National Post

“See Tough! with someone from the opposite sex and prepare for a good argument afterwards. ”
– Jerry Wasserman

“In his 1993 play Tough!, George F. Walker showed the teenage Tina and Bobby trying to figure out what to do about her first pregnancy. That wiry play has been a mainstay of Canadian drama class scene studies ever since thanks to its sharply drawn young characters. ”
– Globe and Mail
“See Tough! with someone from the opposite sex and prepare for a good argument afterwards. ”
– Jerry Wasserman

“The combination of blunt honesty and emotional extremity combusts in comic shock. “I want to care about you,” the stunned Bobby tells Tina, “but I can’t. ” Man-hating Jill warns, “We’re going to kick you to fucking death, okay?” while Tina vacillates between screaming at Bobby and tenderly telling him to put his head between his knees when he starts to hyperventilate; she can’t help but love this guy. He cries after sex. Who could resist?”
– Georgia Straight

Review quotes for Moss Park
“The strength of Walker’s writing is his ability to depict deep pain with a light touch. ” – National Post

“Only in a Walker play do we find ourselves lurching from laughter to heartbreak and back again in the space of a few seconds. ” – Toronto Star