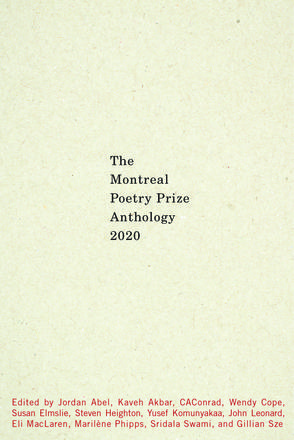 Founded in 2010, the Montreal International Poetry Prize has established itself as a major event in contemporary poetry, both in Canada and around the world. The Montreal Prize Anthology 2020 explodes with talent, combining radiant vision with striking invention in form. The ... Read more

Founded in 2010, the Montreal International Poetry Prize has established itself as a major event in contemporary poetry, both in Canada and around the world. The Montreal Prize Anthology 2020 explodes with talent, combining radiant vision with striking invention in form. The loss of a father finds equivalence in a tornado's blowing an apartment open to the night sky. Sacred and profane images of a mother pile up in couplets, making a heap of gold. Family memory stirs in the dreamy measures of a sestina. Racial injustice is defied and reversed in the unflinching mirror of a palindromic poem. A doctor confesses her life work to be a striving to right the wrong done her father. These poems, a handful of the thousands submitted to the 2020 competition, were chosen for the lone virtue of their speaking directly to the reader, with conviction and with art.
In 2019, the founder of the Montreal Prize, Asa Boxer, transferred it to the Department of English at McGill University. A team of dedicated faculty and graduate students recruited a distinguished international jury, headed by Pulitzer-prize-winner Yusef Komunyakaa, to judge the entries. This book is the result.

Jordan Abel is a Nisga’a writer from Vancouver. His debut poetry collection, The Place of Scraps (Talonbooks, 2013), was awarded the BC Book Prizes’ Dorothy Livesay Poetry Prize and was shortlisted for the Gerald Lampert Memorial Award. Abel was an editor for Poetry Is Dead magazine and the former poetry editor for PRISM international and Geist. He holds an MFA from the University of British Columbia and a BA from the University of Alberta. His work has been published in journals and magazines across Canada, including CV2, The Capilano Review, Prairie Fire, dANDelion, ARC Poetry Magazine, Descant, Broken Pencil, OCW Magazine, filling Station, Grain, and Canadian Literature. His chapbooks Scientia and Injun have been published by above/ground press and JackPine Press, respectively.

Kaveh Akbar's poems appear in The New Yorker, Poetry, The New York Times, Paris Review, and elsewhere. He is the author of Pilgrim Bell (Graywolf 2021) and Calling a Wolf a Wolf (Alice James 2017). Kaveh was born in Tehran, Iran, and teaches at Purdue University and in the low residency MFA programs at Randolph College and Warren Wilson.

Wendy Cope was born in Erith, Kent UK. After reading history at Oxford, she worked as a primary school teacher in London until the publication of her first book, Making Cocoa for Kingsley Amis, in 1986. Since then she has been freelance. Her fifth collection of poems, Anecdotal Evidence, was published in 2018. She has also written for children and edited several anthologies. She was awarded an OBE for services to literature in 2010.

Other titles by Jordan Abel