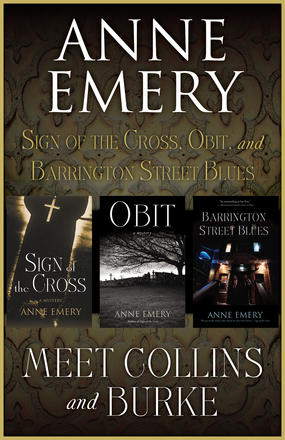 Go back to the beginning of the Collins-Burke mysteries with this collection, which includes the first three novels in the award-winning series: Sign of the Cross, Obit, and Barrington Street Blues.

Sign of the Cross: This winner of the Arthur Ellis Award for Best First Novel ... Read more

Go back to the beginning of the Collins-Burke mysteries with this collection, which includes the first three novels in the award-winning series: Sign of the Cross, Obit, and Barrington Street Blues.

Sign of the Cross: This winner of the Arthur Ellis Award for Best First Novel introduces lawyer Monty Collins who meets Father Brennan Burke when he represents him: the priest is the lead suspect in the murder of a young woman. Conflict between lawyer and client simmers, as evidence piles up and murder charges seem inevitable. With Burke remaining tight-lipped about his past, Monty has no choice but to go behind his back and conduct a probe into the life of his own client. Never in his career has Monty been so lost for answers, until a long-forgotten incident takes on new and ominous meaning . . .

Obit: “Strong characters and a vivid depiction of Irish American family life . . . as outstanding as her first. ” — Library Journal. Declan Burke fled Ireland forty years ago and never looked back. Now settled in New York, he thinks he’s put the old country behind him, until he reads the obituary of one Cathal Murphy. The obituary, he sees at once, is not about Murphy at all. It is a coded indictment of Burke’s own life. And an announcement of his impending death. Halifax lawyer Monty Collins investigates the obit with its allusions to Burke’s IRA past. From the farms of Ireland to the tenements of New York City, Collins gets no help from Burke, who — good soldier to the end — keeps the silence of the grave.

Barrington Street Blues: A rich man and a poor man are found dead of gunshot wounds outside a seedy bar on Barrington Street in Halifax. The police declare it a murder-suicide, but bluesman/lawyer Monty Collins — hired to represent the victims’ families — suspects it’s a double murder. Helped by his friend Father Brennan Burke, and hindered by his femme fatale law partner Felicia Morgan, Monty explores the dark side of Halifax society: hookers, drug addicts, boozers, gamblers, and people desperate to cover up a series of parties that got way out of hand. A secret from the past and turmoil with his estranged wife, Maura, have Monty singing the blues, lashing out at his closest friends, and spending far too much time in the bars of Halifax.