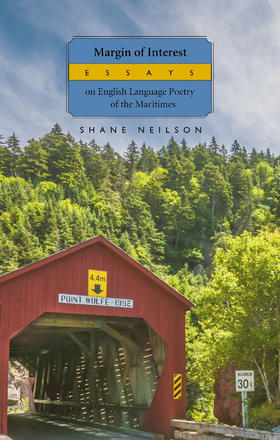 The essays in Margin of Interest showcase the rich history of poetry in the Canadian Maritimes, recognizing the drawbacks of regional frameworks while finding power and beauty in the literary traditions of writers who exist on the margins of Canadian poetry and culture.

The essays in Margin of Interest showcase the rich history of poetry in the Canadian Maritimes, recognizing the drawbacks of regional frameworks while finding power and beauty in the literary traditions of writers who exist on the margins of Canadian poetry and culture.

Shane Neilson is a disabled poet, physician, and critic, who grew up in New Brunswick and now lives in Oakville, Ontario. Neilson is the author of four non-fiction books on medicine and literary criticism. His poetry has won the Walrus Poetry Prize and Arc Magazine’s Poem of the Year Award (twice). His five previous poetry collections include Dysphoria, winner of the Hamilton Literary Award for Poetry and Complete Physical, a finalist for the Trillium Award.

One of the great temptations of any book of criticism is to generate a thesis which can be tested throughout its length. The point of publication, for some, is to devise a new idea which adds to the body of knowledge about a person, place, or thing. It's tempting to try to fashion descriptive and analytic tools. Since this book is about my people (Maritimers), my place (the Maritimes), and the most valued thing outside of my family (poetry), I was sorely tempted to reinvent the wheel.

I've rejected developing a novel thesis about Maritime poetry. I don't believe the idea of a single theoretical model which can incorporate the region's writers and writings. In 2006, Marta Dvorak and Coral Ann Howells wrote in their introduction to the special issue of Canadian Literature devoted to east coast writing that there is a `richness of social and cultural histories, such a multiplicity of voices speaking from so many different angles and in such a variety of literary modes that what is produced amounts to far more than a mapping of region. ' Instead, `any definition of regional specificity' is both comprehended but also exceeded. '

Universalizing ideas only cause trouble, anyway. I'm not able to offer a unifying theory because I lack the intrinsic understanding of French-Canadian/Acadian and Indigenous identities and histories, and these literatures are far older than relatively recent English ones. Moreover, one could argue that other identity shards should be added to my (ironically) centrist history-the history of women writers in the Maritimes, the history of LGTBQ2S+ writers in the Maritimes, the history of Africadian writers in the Maritimes. By now you must realize that any theory I might offer an audience is already suspiciously narrow, but if it did include all the aforementioned categories, it would be uselessly broad. Besides, any claim for the primacy of a single idea is inherently suspicious. Such an idea would suspiciously become `the centre'-a centre ridden with exceptions, as is the rule in any critical framework with specificity. I would soon want to write a book about the exceptions that disproved my idea, trying to make my own idea marginal. As Wolfgang Hochbruck writes in his introduction to Down East: Critical Essays on Contemporary Maritime Canadian Literature, `[N]o one perspective will ever suffice to explain everything' and `summarizing and centreing statements will always be made at the expense of margins, fringes, and diversity. ' I might even get bored with the Unifying Theory since it seemed so Unifying. Finally, we're talking about a region that has been told to Unify For The Sake of Survival for several decades now, and take it from me, contemporary Maritimers don't like that kind of talk. If you're disappointed, though, reassure yourself that the centrist homogenizing edicts are reflected in your disappointment. This place is too various and diverse to conform to your expectation.

[Continued in Margin of Interest. ..]

Other titles by Shane Neilson