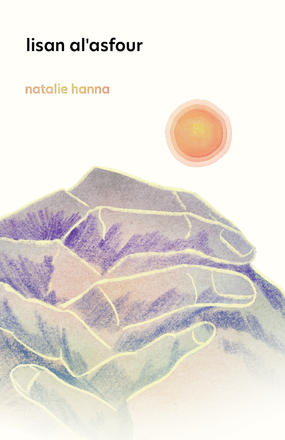 Beginning, and ending, with moving invocations for acceptance, Natalie Hanna?s lisan?alsfour (bird?s tongue), introduces a personal concept of creation around loss, confirming identity, and matrilineal questions of the child of a single mother forced to immigrate to Canada from ... Read more

Beginning, and ending, with moving invocations for acceptance, Natalie Hanna?s lisan?alsfour (bird?s tongue), introduces a personal concept of creation around loss, confirming identity, and matrilineal questions of the child of a single mother forced to immigrate to Canada from Egypt in the 1970s.

Narrativistically tracing challenges to wholeness, including medicalization, childlessness, racism, loss of culture, and labouring within the law, the book then brings the reader through poems of deep mourning for the victims of Tahrir Square, Syrian bombings, the conflict in the Gaza Strip, the Beirutexplosion, and gun/police violence to Black and Indigenous communities. Finally, a series of poems that describe the schism between defining and maintaining identity and the orientalised perceptions of what others have expected invites intimate and vulnerable engagement. These are poems that speak to feeling out of place, longing for gentleness, abusing alcohol to relieve grief, reassessing the body, and coming back into softness and strength despite the sorrow and pressure of trauma.

Though these poems reflect sometimes on graphic encounters, they do so in a respectful manner that confronts atrocity, refusing impulses to avert. They they therefore also have a unique multivalence, embracing as they do an impassioned approach to literary practice as antioppression practice, through the perspective of a politically critical legal professional who is also the self-subject in a narrative of trauma and acceptance.

Natalie hanna is an Ottawa lawyer working with low income populations, and an alumna of Carleton and Ottawa University. Her writing focusses on feminist, political, and personal relational themes. From April of 2016 to September of 2018, she served as the Administrative Director of the Sawdust Reading Series and on the board of Arc Poetry Magazine. Her poem ?light conversation? received Honourable Mention in ARC Magazine?s 2019 ? Diana Brebner Prize.