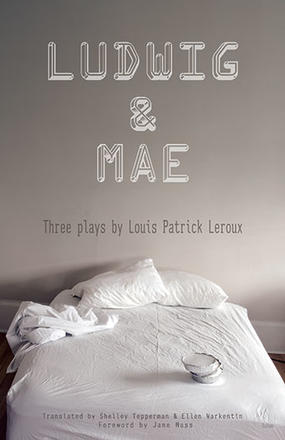 La Litière (1994), Rappel (1995) and Ressusciter (1996), published together here in English translation as Embedded, Apocalypse, and Resurrection respectively, make up a trilogy of plays featuring Gen-Xers Ludwig and Mae. Ludwig, trained as an engineer, hasn’t been able ... Read more

La Litière (1994), Rappel (1995) and Ressusciter (1996), published together here in English translation as Embedded, Apocalypse, and Resurrection respectively, make up a trilogy of plays featuring Gen-Xers Ludwig and Mae. Ludwig, trained as an engineer, hasn’t been able to find work since graduating some time ago. The fact that he is sardonic, philosophically inclined and suicidal hasn’t helped in this regard. Mae, on the other hand, is an actress who has never been out of work. Caught in a perverse relationship, she plays into Ludwig’s constant mind games until one day she decides she’s had enough. Embedded establishes their twisted Strindbergian relationship, while introducing the Philosopher-cum-Chinese Delivery Guy—the absurdist character who acts as a catalyst for the simmering emotional crisis about to explode. Apocalypse is a monodrama in which Ludwig stages his own suicidal ceremonial (along with unlikely allegorical characters such as a Pope, Giacometti's Cow and a Leather-Clad Muse). Resurrection is Mae’s testimonial, where she confronts and reconciles herself with Ludwig’s death, breaks the cycle of their co-dependency, and finally comes into her own.
Together, these plays literally “stage” the internalized and therefore repressed failure of the search for an authentic life in art: the decorative nihilism of the post-modern ethos. Taking us on a cathartic journey from despair to exhilaration—at times perilous, comic, edgy and passionate—Ludwig & Mae releases its audiences from the artificial dark of the theatre into the liberating light of day, radiant with a new understanding: life does not imitate art, life makes art.
This trilogy established Louis Patrick Leroux as a leading figure of the Franco-Ontarian artistic renaissance of the 1990s. Rappel Apocalypse, in particular, was quickly identified as a turning point from what had become a stultifying, identity-driven literary tradition, to a burgeoning of artistic freedom and formal exploration.

Other titles by Louis Patrick Leroux

Other titles by Shelley Tepperman