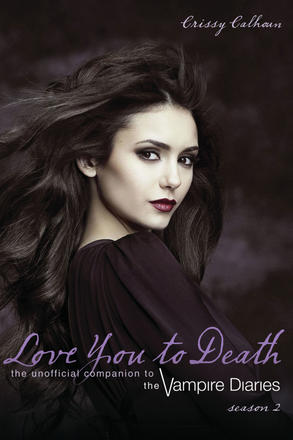 Love You to Death — Season 2

Love You to Death — Season 2

Go deep into the heart of Mystic Falls with this episode-by-episode look at the second season of The Vampire Diaries. This next volume in a series School Library Journal called “well written and thoroughly detailed,” Love You to Death: The Unofficial Companion to The Vampire ... Read more

Go deep into the heart of Mystic Falls with this episode-by-episode look at the second season of The Vampire Diaries. This next volume in a series School Library Journal called “well written and thoroughly detailed,” Love You to Death: The Unofficial Companion to The Vampire Diaries — Season 2 is the essential guide to the show, featuring insightful explorations of each episode with information on the rich history, supernatural mythology, film references, character development, and much more; chapters on the vampire, werewolf, and doppelgänger lore that inspired the series; and details on the making of the show, the people who put it together, and the fandom that keeps it alive. With photos of the irresistible cast and of the show’s filming locations, this second installment captures the fun, fangs, and fear that make this bloodcurdling show so epic.

Crissy Calhoun is the author of the Love You to Death series and Spotted: Your One and Only Unofficial Guide to Gossip Girl. She writes a weekly column for Vampire-Diaries.net, the premier fan site for the series with eight million unique visitors last year. Writing as Liv Spencer, she is also the co-author of books about Taylor Swift, Pretty Little Liars, and the Mortal Instruments series. Find her online at CrissyCalhoun.com. She lives in Toronto, Ontario.
Heather Vee is the co-owner of Vampire-Diaries.net, a source of Vampire Diaries news since 2009, and co-editor of A Visitor’s Guide to Mystic Falls: Your Favorite Authors on The Vampire Diaries (Smart Pop Books, 2010). She is also featured in the special features of The Vampire Diaries: The Complete First Season DVD/Blu Ray, has made several guest appearances on various radio shows and podcasts, and blogs sporadically at HeatherVee.com. She lives in Tucson, Arizona.

In a strange way, my experience with The Vampire Diaries has mirrored the change from season 1 to season 2. When we met the characters in season 1, the story stayed focused, rarely taking us outside of Mystic Falls; season 2 opened the story up — strangers came to town who wouldn’t know a Fell from a Bradley and, through flashback sequences, we left America and the recent past behind. Last year, I watched The Vampire Diaries every week with the “knitting club,” but this year I watched with the raucous fandom on Twitter and saw my timeline explode with omgs, like clockwork, just before each commercial break. Writing for Vampire-Diaries. net allowed me to share my thoughts on each episode to the site’s devoted and smart readers, and it was amazing to see the comments roll in each Sunday afternoon with theories and opinions. When I met some fellow TVD fans in Atlanta, it turned out that they are just as passionate, clever, and hilarious in real life. And as the show’s popularity has grown around the world, I’ve had the opportunity to connect with international fans, particularly in Germany and Poland where my first book was published in translation. Though I’m lucky to have many close friends who love the show as much as I do, there are still those who just don’t get TVD and can’t see why I would spend the time to write two books on it. So it’s been wonderful to always have the TVD family just a tweet away — a community where quips about side parts, Capri Sun, and #NotNowDana are understood and encouraged.

My assumption is that if you’re interested in this season 2 companion, you are a fan of the show. If so, I’ve written this book with you in mind. Its episode guide has its genesis in the posts I wrote over the course of the season for Vampire-Diaries. net. Readers of my first season companion to The Vampire Diaries will notice that the episodes get more attention in this volume. With such a rich, complicated, fast-paced, and fun season, and with the writers expanding the focus to include more of the secondary characters, I felt it was appropriate to lend more analysis to each of the 22 installments of TVD. What isn’t included here is what’s covered in the first volume: I didn’t want to repeat the biographies of the actors, the background information on L. J. Smith’s book series, or the background of the making of the tv show for those of you who have already read season 1’s Love You to Death.

Each episode’s write-up begins with a bit of dialogue that stood out for me either because it captures the episode in a pithy few lines … or it was just too well written not to acknowledge. From there, I provide an analysis of the episode, looking at its main themes, the character development, and the questions it raises, followed by these sections:

COMPELLING MOMENT: Here I choose one moment that stands out — a turning point, a character standing up for herself, or a long-awaited relationship scene (… usually involving kissing).

CIRCLE OF KNOWLEDGE: In this section of the episode guide, you’ll find all the need-to-know info — the details you may have missed on first watch, character insights, the cultural references, and motifs or recurring elements. Often, an episode’s title is a play on another title (of a film, book, song, etc. ); those are explained in this section.

THE RULES: Any work of fiction with a supernatural element has its own particular spin on how that world operates. Here I catalog what we’ve learned about what goes bump in the night.

THE DIABOLICAL PLAN: One of The Vampire Diaries’ defining qualities is its lightning-fast pacing, so “The Diabolical Plan” tracks the various human and non-human forces at work in Mystic Falls and raises questions about what their next steps may be.

HISTORY LESSON: The only class at Mystic Falls High School that gets considerable screen time is history. History, both real and fictional, is important in this series — and for the characters’ back stories, the town’s history, and subtle references, “History Lesson” is your study aid.

BITE MARKS: Bite marks, stake wounds, snapped necks, and good old-fashioned slaps to the face — this section is all about the violence on the show, cataloging injuries inflicted and suffered by the immortal and mortal.

PREVIOUSLY ON THE VAMPIRE DIARIES: History repeats itself in Mystic Falls, and in this new category for my season 2 guide, I outline the incidents, motifs, and key moments that are revisited or echoed in each episode. Included at the back of the book is a quick refresher on the season 1 episodes (see page 264), which I refer to by title in this section.

MEANWHILE IN FELL’S CHURCH: Here we travel from one tvd universe to another and I draw comparisons between L. J. Smith’s original plotting and characterization and that of the tv series. Because production of the tv show was underway before The Return trilogy was published, this section focuses only on The Awakening, The Struggle, The Fury, and Dark Reunion. (Fans of The Return, please don your Wings of Understanding. )

OFF CAMERA: Here we leave the fictional world behind to hear what the cast and crew have to say about filming an episode; sometimes I provide background details on a guest star, director, or other filming details.

FOGGY MOMENTS: Elena, surprised by Stefan in the cemetery in the pilot episode, tells him the fog is making her foggy. “Foggy Moments” is a collection of confusing moments for the viewer — continuity errors, arguable nitpicks, full-on inconsistencies, and mysteries that may be explained later.

MUSIC: An important part of The Vampire Diaries is its soundtrack, and in this section, I tell you what song is playing in each scene.

QUESTIONS: One of the funnest ways to spend the time between episodes of TVD is with theorizing and wondering what will happen next or what motivates a character. In this section, I raise questions about characters, plotting, and mythology for you to consider as you watch the season unfold.

Make sure you watch an episode before reading its corresponding guide — you will encounter spoilers for that episode (but not for anything that follows). Within the pages of the guide, you’ll also find short biographies of the actors who bring the recurring characters to life as well as sidebars about other elements of the show and about its influences. After the episode guide, you’ll find a chapter that looks at the season as a whole by examining one of its main recurring themes: the double. There’s an interview section featuring Q&As with two leaders of the fandom and with actors Tiya Sircar (Aimee Bradley) and Bryton McClure (Luka Martin). Finally, I’ve updated the timeline included in my first companion guide to include season 2’s info on the past thousand years in the TVD universe.

“Full of heart, and as companion books go, even though this is unofficial, it has me amazed at the amount of detail within. I know this had to have taken a lot of work, but the author, Crissy Calhoun, totally pulled it off. ” — KSite TV

Other titles by Crissy Calhoun