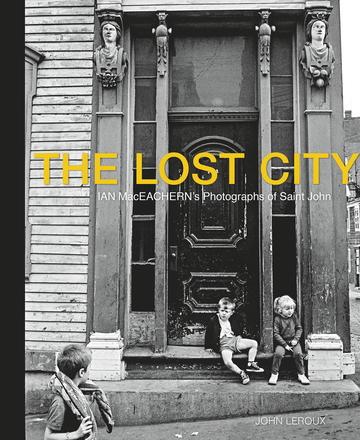 From the 1950s through the 1970s, cities throughout North America engaged in disruptive periods of massive "urban renewal" of older, poorer areas. Neighbourhoods were razed to make way for freeways, housing projects, public amenities, sports arenas, and ... Read more

From the 1950s through the 1970s, cities throughout North America engaged in disruptive periods of massive "urban renewal" of older, poorer areas. Neighbourhoods were razed to make way for freeways, housing projects, public amenities, sports arenas, and subdivisions. Planned communities replaced older urban neighbourhoods that had evolved over generations.

Ian MacEachern worked for CHSJ-TV in Saint John from 1962 to 1966, and he witnessed the profound transformation of Canada's oldest city as it was buffeted by the forces of reconstruction and modernization. He also recorded the life of the city, its neighbourhoods, its residents, and social life in more than a thousand photographs. Like the documentary photographic works of Walker Evans, Dorothy Lange, and Henri Cartier-Bresson, MacEachern's photographs show an extraordinary power in their honest depictions of fleeting moments and a raw humanity.

For The Lost City: Ian MacEachern's Photographs of Saint John, architectural and social historian John Leroux has selected seventy-five black-and-white photographs drawn from MacEachern's exceptional archive and written an accompanying essay that examines the recent history of Saint John and the effect of urban renewal on civic architecture, historic neighbourhoods, and community structure.

The Lost City accompanied a touring exhibition, curated by John Leroux and organized by the Beaverbrook Art Gallery.

John Leroux is manager of collections and exhibitions at the Beaverbrook Art Gallery.

"MacEachern’s collection of photographs capture a neighbourhood in its twilight. While many of the buildings themselves are certainly in decline, MacEachern is able to key in on elements that show a natural vivacity in its people. "

Other titles by John Leroux