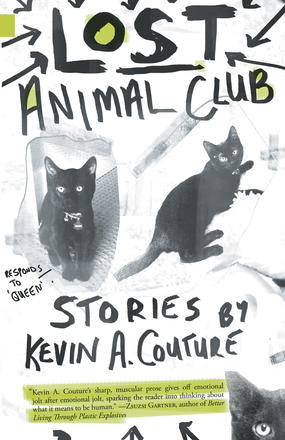 By Kevin A. Couture

In his debut story collection, Kevin A. Couture creates a world where the veneer of humanness stretches thin and often cracks as a menagerie of burdened characters reveal their beast-like traits. In his desperate survival plan, a pre-teen "rescues" dogs in order to sell them ... Read more

In his debut story collection, Kevin A. Couture creates a world where the veneer of humanness stretches thin and often cracks as a menagerie of burdened characters reveal their beast-like traits. In his desperate survival plan, a pre-teen "rescues" dogs in order to sell them back to their well-off owners; a marathon pacesetter reflects on the pace she sets both on and off the race route, as she navigates her imperfect marriage; a man confronts his drive for alcohol and the deadly and isolating consequences that leave him to risk his last scrap of control; and two kids, for different reasons, execute their plan to capture a bear cub. ,

Lost Animal Club combines murky sensibilities with finely rendered, precise prose. The writing is gripping and honest, with metaphors and similes as startling as the harsh choices the characters make.

Kevin A. Couture grew up in a BC mining town and has spent the last decade waking before dawn to write. The stories in his debut collection, Lost Animal Club, have all appeared in Canadian or American journals. In recent years, he has been nominated for the Writers' Trust of Canada/McClelland & Stewart Journey Prize, and was included in the anthology Coming Attractions. He lives on Vancouver Island with his children, and their Brittany spaniel, who spectacularly defies animal training.

For more information about Kevin A. Couture and Lost Animal Club, visit www.kevinacouture.ca.

The dog might have been born with it for all Rubin knows. A scruffy, genetic misfit. He first came upon him at the scrapyard while scrounging for jewellery wire and other useable crap. They approached each other slowly, flanked by a smouldering mound of plastic and the skeleton of a minivan. The animal looked pathetic; his fur riddled with ticks and spear grass, tattered and filthy as a rug. He seemed vaguely sarcastic if you got right down to it with his perpetually upturned lip, his distant, smoky gaze. Despite all that, there was something about him Rubin liked, something he couldn't explain. He checked the dog's tail to assess his friendliness but there wasn't one. It'd been cropped away or broken or maybe even blown right off at the ass. Hardly a discernible stub left in its place. How in all honesty could Rubin not have taken an animal like that home with him?

The dog gets up, moseys over to his food dish and waits. He doesn't fuss. Doesn't get excited. Doesn't even groom himself. And if Rubin decided not to fill his bowl today, he wouldn't scratch or bark. He'd wander off and go back to sleep. The perfect pet, remote and distant as an emperor penguin.

The first diagnosis occurred in April. The town was in the middle of a civic election and Sarah Newson, the incumbent mayor, came glad-handing door to door. Initially, Rubin wasn't sure if he should invite her in or what. Who knew the protocol for that sort of thing? The number of hassles it might lead to?

"Are you a decided voter, Mr. Tack?" the mayor said from the hallway. Her requisite smile had no oomph at all, like she was exhausted with Rubin already and knew he hadn't voted in any election, ever, in his entire life. In actuality there was a tumour the size of an eyeball in her left breast sucking the energy right out of her. Something neither one of them had a clue about at the time.

Before Rubin could answer, the dog started circling the mayor. He licked her blouse when she leaned down, pressed his nose into her chest hitting the tumour, painfully, dead on. Two weeks later she returned with the doctor's report. Two weeks after that, a full page article in the local paper and a bit piece in the nationals. And now, three confirmed positives later, people even come from down in the valley for a scan. Go figure.

The phone rings and Rubin fumbles with the receiver; his hands, tired from feeding branch segments through the bead borer. Worth answering though. If the caller's a customer, it'd be the third this week and at twenty-five bucks a scan, that's not bad.

"Hello?" he says, trying not to sound impatient.

"Is this Rubin Tack?"

"My name's Caleb. I work for The Oprah Winfrey Show, guest acquisition department. Do you have a minute?"

Praise for Lost Animal Club:
"Kevin A. Couture's Lost Animal Club is a polished lens that glimpses adolescent mysteries and the lingering puzzles of addiction and sobriety and healing. These haunting stories are populated by bears and bees, cats and dogs, lost animals and lost children and lost parents, evoking a world both charming and stormy, domestic and animal--and it is animal in the best way. "
~ Mark Anthony Jarman, author of Knife Party at the Hotel Europa
"The stories in Lost Animal Club do what the best short fiction excels at: shaping loneliness into art and capturing people in extremis. Kevin A. Couture's sharp, muscular prose gives off emotional jolt after emotional jolt, sparking the reader into thinking about what it means to be human. "
~ Zsuzsi Gartner, author of Better Living Through Plastic Explosives
"Kevin A. Couture's stories are filled with the hurting and the brave, people who seek redemption in whatever ways they can manage. Lost Animal Club is a compelling, dexterous collection, full of humanity and insight. "
~ Julie Paul, author of The Pull of the Moon
"These are beautiful stories about survival in social wilderness. I loved them! Read this book. Lost Animal Club will find you wherever you are and invite you to come back home. "
~ Sarah Selecky, author of This Cake Is for the Party
". .. executed with masterful control. .."
~ Andrew MacDonald, Event
"These stories stuck with me, so consuming that they infiltrated my dreams. ..."
~ Worn Pages and Ink Blog 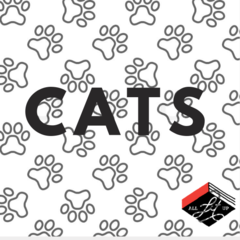 Because we never need a reason to celebrate cats, we're having a mewment with these clawsome cat-adorned book covers. Scroll on if you're feline this edition of Cover Collage (which will include no further puns, we promise). 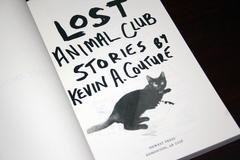