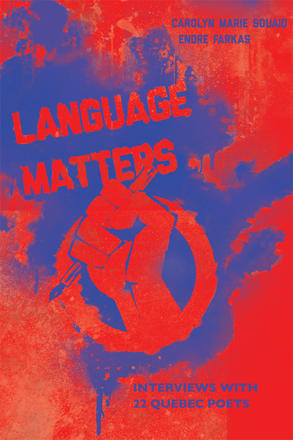 "May you live in interesting times." So goes the ancient Chinese curse. In Quebec, we are always living in "interesting" times. Where else in Canada, perhaps even the world, do you have official language police that patrol the highways and byways of the province looking for ... Read more

Launched in 2009 on St. Jean Baptiste Day, Poetry Quebec was an online magazine dedicated to showcasing the English-language poets and poetry of "la belle province." Its founding editors and publishers--poets themselves--came from very different backgrounds but shared the desire to make sure the English-language poetry of Quebec got the attention it deserved. In this book, some of the best and most innovative English-language poets of Canada--rising stars and award-winning authors--reflect on these and other questions of politics and poetics. Culled from the website and expanded for this publication, those interviewed include Erin Moure and Stephanie Bolster (winners, Governor General's Award); GG nominee David McGimpsey; Trillium Prize nominee Mary di Michele; Susan Gillis and Gabe Foreman (winners, A.M. Klein Poetry Prize), Carolyn Marie Souaid and Endre Farkas (winners, Zebra International Poetry Film Festival, Berlin); performance poets Catherine Kidd, Moe Clark and kaie kellough; and Rhodes scholar Mark Abley--all contemplating the work they do against the backdrop of this interesting place and time.

Carolyn Marie Souaid has been writing and publishing poetry for over 20 years. The author of six books and the winner of the David McKeen Award for her first collection, Swimming into the Light, she has also been shortlisted for the A.M. Klein Prize and the Pat Lowther Memorial Award. Much of her work deals with the bridging of worlds; the difficulty, perhaps the impossibility of it, but the necessity of the struggle. She has toured her work across Canada and in France. Since the 1990s, she has been a key figure on the Montreal literary scene, having co-produced two major local events, Poetry in Motion (the poetry-on-the-buses project) and the Circus of Words / Cirque des mots, a multidisciplinary, multilingual cabaret focusing on the "theatre" of poetry. Souaid is a founding member and editor of Poetry Quebec, an online magazine focusing on the English language poets and poetry of Quebec.

Endre Farkas was born in Hungary and is a child of Holocaust survivors. He and his parents escaped during the 1956 uprising and settled in Montreal. His work has always had a political consciousness and has always pushed the boundaries of poetry. Since the 1970s, he has collaborated with dancers, musicians and actors to move the poem from page to stage. Still at the forefront of the Quebec English language literary scene — writing, editing, publishing and performing — Farkas is the author of twelve books, including Quotidian Fever: New and Selected Poems (1974-2007). He is the two-time regional winner of the CBC Poetry Face Off Competition. His play Haunted House, based on the life and work of the poet A.M. Klein, was produced in Montreal in 2009. Farkas has given readings throughout Canada, USA, Europe and Latin America. His poems have been translated into French, Spanish, Hungarian, Italian, Slovenian and Turkish.

It is hardly surprising that poets should be articulate and thoughtful in conversation about their practice. Their daily working lives constellate around language: listening to it, looking for it, recording it before whatever the Muse whispers to them evanesces....The Quebec poets featured in Language Matters are almost uniformly smart and thoughtful in answering a series of set questions. The questions vary from the straightforward ("Which Quebec poet did you first read?" -- Leonard Cohen is the answer for a stunning majority) to the complex ("Why do you write?"), and the responses tell us much about the poets (Stephanie Bolster, Erin Moure, Jason Camlot, Robyn Sarah, among many others) and their work, as well as providing insight into their strategies for composing poems. Anyone interested in poetry in general, and especially poetry in Quebec, will find these interviews deeply engaging.