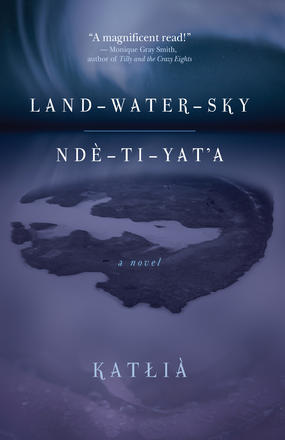 A vexatious shapeshifter walks among humans. Shadowy beasts skulk at the edges of the woods. A ghostly apparition haunts a lonely stretch of highway. Spirits and legends rise and join together to protect the north.

Land-Water-Sky/Ndè-Ti-Yat’a is the debut novel from Dene ... Read more

A vexatious shapeshifter walks among humans. Shadowy beasts skulk at the edges of the woods. A ghostly apparition haunts a lonely stretch of highway. Spirits and legends rise and join together to protect the north.

Land-Water-Sky/Ndè-Ti-Yat’a is the debut novel from Dene author Katlià. Set in Canada’s far north, this layered composite novel traverses space and time, from a community being stalked by a dark presence, a group of teenagers out for a dangerous joyride, to an archeological site on a mysterious island that holds a powerful secret.

Riveting, subtle, and unforgettable, Katlià gives us a unique perspective into what the world might look like today if Indigenous legends walked amongst us, disguised as humans, and ensures that the spiritual significance and teachings behind the stories of Indigenous legends are respected and honored.

We acknowledge the support of Arts Nova Scotia.

Katlià is a Dene woman from the Northwest Territories. Previously serving as a Councillor for her First Nation, Yellowknives Dene, she is an activist, poet and columnist and law student in Indigeous Legal Orders. Katlià writes about Indigenous injustices with a focus on the north. Land-Water-Sky is Katlià’s first fictional novel.

Katlia has created a masterpiece that brilliantly weaves intriguing characters, history, culture, love for the land, water and sky into a riveting and magnificent read.

— Monique Gray Smith, author of Tilly and the Crazy Eights

“This book brought a lot of memory for me when Elders used to tell stories sitting around and visiting my parents and telling stories about nahgaa. The story was so descriptive the way the Elders told stories. I related to all the events of the story because its very similar to the stories I’ve heard. Mahsi Cho for keeping our stories alive. ”

“In the era of pre-contact, ancient stories were deeply engrained in the landscape from which it derives from. They inspire traditional storytellers to pass onto current times, a frame to support today’s tellings and in this writing, it’s an extension too snippets of stories heard, the collisions of changing times of life in the raw, taking many forms of intrigue, an ongoing tradition, a shapeshifting. ”