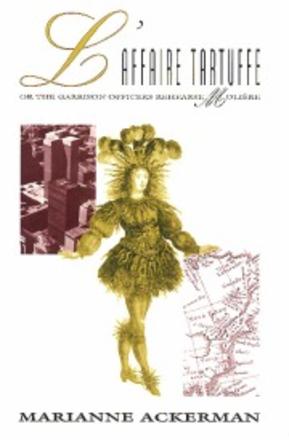 It is 14 years since the Battle of the Plains of Abraham and 2 years before the American Revolution. The British garrison in Montreal is rehearsing Molière's Tartuffe, hoping to impress the local ladies with their French effort. Matters are complicated by the Church, however, ... Read more

It is 14 years since the Battle of the Plains of Abraham and 2 years before the American Revolution. The British garrison in Montreal is rehearsing Molière's Tartuffe, hoping to impress the local ladies with their French effort. Matters are complicated by the Church, however, which had banned theatre productions in Québec since 1694, and is especially loathe to allow a production of the blasphemous Tartuffe. Political intrigue gets in the way too, as locals and officers get swept up the romance of the revolution to the south, plotting treason in Québec. And, naturally, there is love—alliances of the heart which respect no political, cultural or linguistic borders. L'Affaire Tartuffe is inspired by historical fact: the first performance by anglophones in Québec was put on by British garrison officers stationed in Montreal. They chose to debut with Molière. ..and they performed in French. Ackerman weaves a riveting drama of cross-cultural love affairs, the stranglehold of Church and State, and the seditious plans to join the Yankees to the south.

A long-time Montrealer, Marianne Ackerman was born in Belleville, Ontario. She has an MA in drama from the University of Toronto and studied French at the Sorbonne. Her three published novels include the best-seller Jump. A frequently produced playwright, her comedy Triplex Nervosa premiered at the Centaur Theatre in 2015. It was published along with two sequels as Triplex Nervosa Trilogy by Guernica Editions in May of 2021.

At rehearsal. Williams: You've got it all wrong, Fraser. I'm surprised after fourteen years in Quebec, your understanding of the power of language is so primitive. Fraser: Language is like a suit of clothes. If you put an idiot in a high priced coat, you get a well-dressed idiot. Williams: Language works from the inside. To speak French is to find a hidden side of oneself. Fraser: If you've got something to hide, in which case you're a hypocrite. But don't blame it on the limitations of your mother tongue. Williams: I'm not blaming my mother tongue. I'm simply suggesting that to learn a second language is to find a new and sometimes frightening door. ..to the soul. One can't always know what one has to hide, Fraser Louis, what do you think?Grandpré: Pardon?Williams: The soul. Is language a means to uncovering the soul?Fraser: He wasn't listening to a word we said. Enter Humphreys. Humphreys: Good afternoon, fellow thespians. Williams: Sir!Humphreys: Ah! Major?Fraser: Hello, Harry. Humphreys: Well, well. Malcolm Fraser. One of General Wolfe's finest, in the old days. What a pity you left. Fraser: Well, I'm back. Humphreys: To do the play. Williams: Louis, je voudrais vous présenter mon oncle, le Colonel Humphreys. My mother's sister's husband. Nous ferons la pièce ensemble. Louis de Grandpré. Humphreys: Mr. de Grandpré, I've heard so much about you. Monsignor Montgolfier tells me you were his prize student. And you gave up a brilliant career in the priesthood. Awkward pause. Humphreys: Well, welcome aboard. I'm very happy to have your participation in our little cultural endeavours. Now, what role do I play?Pause. Williams: Uncle is quite an accomplished actor. Humphreys: Remember India?Williams: The Duchess of Salisbury. Humphreys: She Stoops to Conquer. Williams: And Shakespeare. Humphreys: You did say this one's a comedy?Williams: We tried Hamlet. Humphreys: In Jamaica. Williams: Disaster. Humphreys: Too hot. Williams: Too slow. Humphreys: Too long. Grandpré: Yes! Tartuffe is a comedy. Humphreys: What part do I play?Grandpré: Orgon. He owns the house in which the intrigue takes place. Humphreys: Good. Grandpré: Lieutenant MacKinnon plays your wife. Humphreys: Oh. Grandpré: And I play Tartuffe, an imposter who steals your wife, your daughter, and your house, under the pretext of saving your soul. Fraser: Assuming he has one. Humphreys: May I see the play?Humphreys flips through the play. Louis and Williams wait. It seems to take forever. Finally:Humphreys: Très bien. Captain Williams, General Gage is coming up from New York next week to inspect the regiments. I'll be quite busy for at least a month. In which case I shan't be able to join in the fun before at least, say, Act III. Which seems to coincide with the first appearance of this monsieur Tartuffe. Williams: You'd like to play Tartuffe, Sir?Humphreys: General Gage. Commander-in-chief of the British forces in North America, Captain. Let us not lose sight of why we are here. Williams: But Sir, the play was Louis' idea. The role of Tartuffe is—Grandpré: Please!. .. Le colonel Humphreys en Tartuffe. Et pourquoi pas?Humphreys: . ..If you insist. Grandpré: Je vous en prie.

“It's a play of sweeping scope, Shakespearean ambition, worthy intentions and delicious flashes of sniping wit. And it takes its cue from an actual event. In 1774, British garrison officers performed two Molière plays in Montreal. ”—The Montreal Gazette

Other titles by Marianne Ackerman