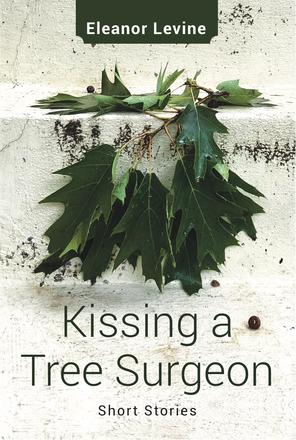 In Kissing a Tree Surgeon, worlds traverse the Israeli-Palestinian conflict in New Jersey. Southern women get kidnapped by North Koreans. A Dutch girl solicits money on OKCupid. A young woman meets Golda Meir on an Upper East Side bus in New York City. A character believes he’s the biological son of Frank Sinatra. Zionist-Hasidic lesbians protest anti-Semitism at a women’s Catholic college. A stalking moviegoer takes her dead grandmother to a Bertolucci film. A daughter meets her father’s mistress at his grave. An employee is banned from calling her boss in the office. An adult woman visits the radio store in Lakewood, New Jersey, of the boy who didn’t invite her to his bar mitzvah.

Eleanor Levine’s work has been published in more than 80 publications. Her poetry collection, Waitress at the Red Moon Pizzeria, was published in 2016. Eleanor has worked as a journalist and critic and is currently a medical copy editor.

My father had an unorthodox way of eating apples. He’d crunch with excessive force, so you could hear ev- ery piece of apple dispensed in his mouth. His chomping disrupted any sense of decorum at our table, for he believed more in anarchism and nonconformity than in providing us with good dinner etiquette.  This was so unlike my mother who had an adroit seriousness with all things. Seriousness, religiosity—these were my mother.  This protracted seriousness made me so crazy that I ran around the house, the neighborhood, the inner city—crying, screaming, unkempt, taking on a planetary wildness of my own. I yelled at her and my brothers and attacked innocent life forms with a high- pitched voice that could have been the aborted fetus of Beverly Sills.

Eleanor Levine’s debut collection of stories is wild and exuberant, full of the stuff of real life filtered through a vision as unique as any I have ever encountered. I loved every story in this book, as wide-ranging in scope and subject as they are. The short story form is in the new and innovative hands of Eleanor Levine, which means that it’s alive and well and ever-evolving. A remarkable book.

Eleanor Levine’s short stories start out odd, become strange, and flower into true weirdness. It’s ordinary life shattered into fragments and reassembled as rueful surreal comedy, in which people die and are buried, but also show up for lunch, their indelible grumpy selves. It’s like nothing else you are likely to read this year, or maybe any year.