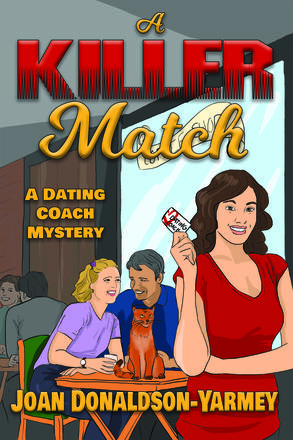 Jenna Hamilton is a dating coach and the co-owner of a bookstore, with Adam Owens, in the Net Loft on Granville Island in Vancouver. When her best friend, hairdresser Hillary, is a bystander in a car crash that kills her co-worker Bruno, Jenna is there to provide emotional support. ... Read more

Jenna Hamilton is a dating coach and the co-owner of a bookstore, with Adam Owens, in the Net Loft on Granville Island in Vancouver. When her best friend, hairdresser Hillary, is a bystander in a car crash that kills her co-worker Bruno, Jenna is there to provide emotional support. But soon, Bruno's condo is trashed, along with the salon where he used to work with Hillary.

As Jenna tries to make sense of what is happening, she makes some shocking discoveries about Bruno's life, and realizes the facade he had presented to those around him was an almost complete fabrication. Who was Bruno, really? Did someone intentionally kill him? And what are they after?

Joan Donaldson-Yarmey is the author of four mystery novels, three Canadian historical novels, two sci/fi novels, one holiday romance, and seven non-fiction travels books. She has put on writing courses in towns and cities in British Columbia and Alberta and was on mystery panels at Crime Writers of Canada's Bloody Words Conference in Victoria and mystery and historical panels at When Words Collide in Calgary. She lives on a small acreage on Vancouver Island.

Jenna was standing behind the U-shaped wooden counter of the bookstore. She held the cell phone up for Hillary to read.

Hillary leaned across the counter. It's been wonderful dating you these past two months, but I met up with my ex-wife and I found I still have feelings for her. I want to explore those feelings so rather than lead you on I think it is best if we quit seeing each other. It was from Brad.

"What a jerk," Hillary said. "Well, that adds to your expertise and certainly cements your title as the dating coach doyen. "

"Doyen? That's a pretty big word. " Jenna grinned at her best friend. Hillary was tall and slender with a head of thick, shoulder-length hair. She owned a salon and liked to change her hair style and colour often. This month it was light brown and she wore it in cute waves. She also liked having a word of the week and apparently she had found one for this week.

"Well, a doyen is the most well-known person in their field. You must admit that you have tried all of the dating sites with a variety of results and that's why you are a famous dating coach. "

"Famous might be too strong a word," Jenna said.

"Close enough. You certainly have helped a lot of first-timers prepare for their dates and many dating old-timers finally find the right person. "

"Well, you know that saying--those who can't, teach. It's just that I am getting tired of trying to find a man through those sites. None of the guys seem to live up to their profiles. "