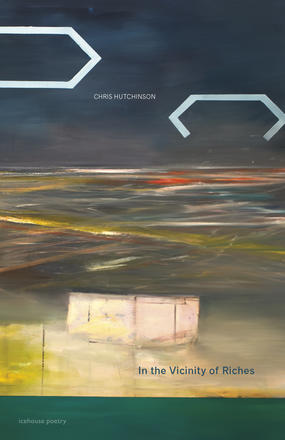 In the Vicinity of Riches

In the Vicinity of Riches

The richness of memory is a curse and a gift.

Twisting and turning against the soul-sicknesses of late-capitalism, Chris Hutchinson's new collection of poems scrolls through myriad moods and aesthetic guises, by turns hallucinatory, despondent, and serene. Authenticity and artifice ... Read more

The richness of memory is a curse and a gift.

Twisting and turning against the soul-sicknesses of late-capitalism, Chris Hutchinson's new collection of poems scrolls through myriad moods and aesthetic guises, by turns hallucinatory, despondent, and serene. Authenticity and artifice collide and collude. Political and personal boundaries blur as do the categorical divisions between content and form. Imagine an architecture of breezeways, a freeway of exit ramps, a literature of repurposed literary conventions, the past "re-presented" in endless waves of arrival.

Here we find a nostalgia for modernist disjuncture, there a yearning for symbolist depth, and everywhere a fondness for surfaces which, ironically, coax the reader to peel back the stylish veneer.

Haunted by a weird range of historical personages, while travelling from Houston to the moon and several places in between, the lyric "I" bears witness to its own endless destruction and reconstitution.

At once escapist and socially engaged, Hutchinson's poems enact the ephemeral and fluid nature of our linguistic experiences, tracing those ecstatically tortuous processes by which we might sometimes find, even in the midst of loss, the value of our lives beyond the spheres of war, toxic rhetoric, and neo-liberal commerce.

Born in Montreal, Chris Hutchinson is the author of three previous collections of poetry (Unfamiliar Weather, Other People's Lives, and A Brief History of the Short-lived), as well as the speculative autobiographical verse novel Jonas in Frames. He holds a PhD in Literature and Creative Writing from the University of Houston. He now teaches at MacEwan University in Edmonton, Alberta.

"Chris Hutchinson displays a wealth of thought and craft. . .. These poems are not postcard scenes. They are post-modern elegies showing what happens when one worships the Moloch of technology, or the Baal of consumerism, at the expense of art, relationships, even self-preservation. "

"You can’t go to sleep on anything in Hutchinson’s poetic-thought condo . .. you will remain in the stunning vortex of what what what. "

"An examination of the strange and the odd, combined with ways in which politics affects personal perception. . .. Hutchinson’s language plays with perceptive elements by perpetrating linguistic contortions that are typical of post-Bök CanLit experimentalists. This approach results in some truly delightful lines. "

"Hutchinson’s thrilling, kaleidoscopic speed of associations mirrors the human present, while momentary but constantly recurring oases of loveliness signal a different possibility, perhaps beyond our grasp: renewed freshness, the seed of an answer to what 'I fear most — to never stop / wondering whether there’s time left / to stop. To start over again. ' A reader who meets these superb poems will join in an adventure of keeping alive the hunger for transformation. "

"Hutchinson refuses to turn away from our present disaster, aware it has been with us for centuries. This world looks a lot like what exists outside our door, yet coloured with the imagination of a Wallace Stevens, and the urgency of a Jorie Graham. At one point Hutchinson admits that he likes 'the feeling of having no feelings,' only to implore a few pages later 'show me how to feel. ' Live in this world and find a way forward. "

"'It’s hard to meet the world exactly where it is,' writes Hutchinson. And, yet, this is precisely what these poems do. The poet strikes a balance between the homicidal and the hopeful, and he does so with the raw vulnerability of one for whom the shadows are a kind of illumination. There is a dogged, relentless love at the heart of this work. "

Other titles by Chris Hutchinson