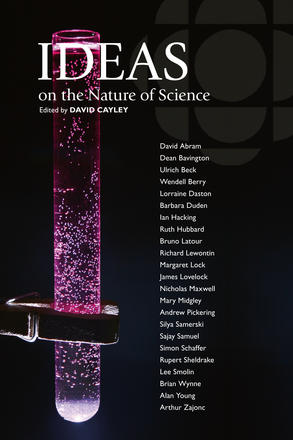 Ideas on the Nature of Science

Ideas on the Nature of Science

If science is neither cookery, nor angelic virtuosity, then what is it? Modern societies have tended to take science for granted as a way of knowing, ordering, and controlling the world, where everything was subject to science, but science itself has largely escaped scrutiny. ... Read more

If science is neither cookery, nor angelic virtuosity, then what is it? Modern societies have tended to take science for granted as a way of knowing, ordering, and controlling the world, where everything was subject to science, but science itself has largely escaped scrutiny. In this fascinating collection of interviews, CBC Radio's Ideas producer David Cayley talks to some of the world's most provocative thinkers about how the ideas of science have directed human thought and shaped human society. Contributors include: Steven Shapin, Simon Schaffer, Margaret Lock, Arthur Zajonc, Rupert Sheldrake, Sajay Samuel, Richard Lewontin, Ruth Hubbard, Ulrich Beck, David Abram, and many others.

David Cayley is a Toronto-based writer-broadcaster. Over the course of his career, he has interviewed some of the leading philosophers, literary critics, historians, social theorists, and scientists of our day.

"For me, the power of the book is how editor David Cayley probes his guests, through his powerful questioning, to examine the fundamental nature of science and its role in history and modern society. I highly recommend this must read anthology of the world's leading thinkers on science Ideas on the Nature of Science edited by David Cayley. The ideas presented by the philosophers, historians, and practitioners of science will have a profound effect on how the reader views the role and nature of science in society. Indeed, the very myth of modernity, and of science as part of that concept, is called into serious question in several interviews. "

"The rich array of subjects and levels of discussion makes for fascinating reading. Ideas on the Nature of Science is an intellectual treat for anyone interested in exhilarating adventures into the frontiers of the sciences. "

"Cayley's entertaining, eclectic, challenging conversations unveil a rich ecology of how we think about the world and why it matters. These exhilarating adventures into the frontiers of the sciences left me with a sense of wonder, and of hope. "

"An important book on a vitally important topic. David Cayley's thoughtful conversations give us an intellectual GPS System. No one should go on a quest for understanding the enterprise of science without it. "

"Illuminating. Topics range from exploring the vanishing northern cod to the Gaia theory of life on earth. "

"What is really remarkable about science is its ability to create novelties. And these novelties are not just at the level of new discoveries and new theories; they involve whole new ways not only of understanding knowledge, but of getting knowledge and being a knower. "

"A great introduction to science and technology studies. The thinkers and topics are impressive. "