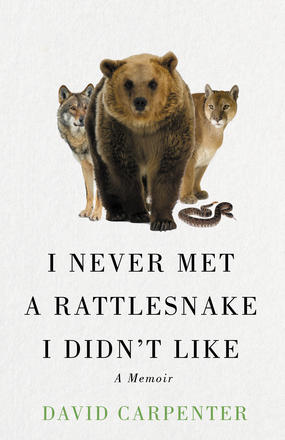 David Carpenter’s collection of essays explores a city boy’s love of the wild, a passion that has enriched his life from boyhood. At 80, thisirrepressible Saskatchewan raconteur examines his intense fascination with predators large and small, and his awe in the face of the ... Read more

David Carpenter’s collection of essays explores a city boy’s love of the wild, a passion that has enriched his life from boyhood. At 80, thisirrepressible Saskatchewan raconteur examines his intense fascination with predators large and small, and his awe in the face of the variety ofcreatures that may be out to get us—or who are out to get one another. How does this combination of fear and wonder affect our relationship with the natural world? And why has Carpenter personally been both drawn to, and repelled by, so many wild animals, including alligators, wolves, cougars, spiders, black bears, grizzlies, weasels, and of course, snakes—particularly deadly rattlesnakes?The stories that fuel the essays in this entertaining memoir are as diverse as the animals—and insects!—at the heart of Carpenter’s inquiry. As a young man, Carpenter is working in Jasper National Park, and he’s lugging his banjo—hustling on his way to a paid gig—when he takes a short cut through the woods, makes a wrong turn and ends up at the dump. He looks across at some large animals. Horses? No, five, count ‘em, five grizzlies. Luckily a ranger on an actual horse leads him out of danger. He’s fishing for brook trout in the mountains with a friend, cooling their catch in a convenient snow bank. But the fish keep disappearing. He finds them cached under a nearby rock, and when he tries to pull one out, he’s in a tug-of-war with some hidden creature, small but fierce—is it a mink?Encounters like these drive the author into philosophical conjecture, into reading everything he can get his hands on about these and other creatures as he contemplates our place in the wild, and the value of the wild in our lives. These essays are essential reading for those of us who share David Carpenter’s fascination with the predators that so fundamentally shape our understanding of wilderness and the necessity to preserve it.

David Carpenter is the author of more than a dozen books, including nonfiction, several novels (most recently The Gold), short story collections, a collection of novellas (most recently Welcome to Canada), and one volume of poetry. He has also worked as an editor, most notably as the editor of The LiteraryHistory of Saskatchewan. He was shortlisted for the 2015 Tom Fairley Award for Editorial Excellence for his work on The Educationof Augie Merasty. He has received several Saskatchewan Book Awards, including Book of the Year for the essay collection Courting Saskatchewan, as well as National and Western Magazine Awards for his magazine writing. David taught for many years at the University of Saskatchewan. He is an avid fly fisherman andnature-obsessed hiker and conservationist. He lives in Saskatoon.