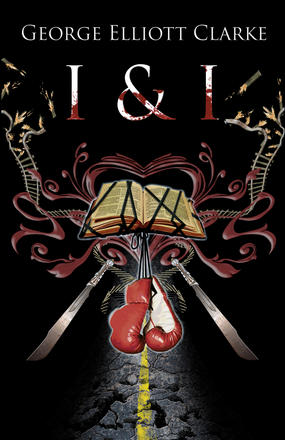 In the "Boogie Nights" era of the 1970s, Betty Browning and her lover, boxer Malcolm Miles, travel from the fog-anchored grime of Halifax, Nova Scotia, to sunburnt Corpus Christi, Texas, and back — ... Read more

In the "Boogie Nights" era of the 1970s, Betty Browning and her lover, boxer Malcolm Miles, travel from the fog-anchored grime of Halifax, Nova Scotia, to sunburnt Corpus Christi, Texas, and back — meeting tragedy and bloodshed along the way. I & I smoulders with love, lust, violence, and the excruciating repercussions of racism, sexism, and disgust. Rastafarian for "you and me," "I & I" expresses the oneness of God and man, the oneness of two people or the distinction between body and spirit.

In George Elliott Clarke's hands, this existential aesthetic crystallizes in a love story of Gothic grit. The narrative gives this verse novel shape; the poetry makes it sing, straddling folk ballad, soul, and pop music, all the while moaning the blues.

"Clarke marches and dances and stomps and skates (but never ever shuffles) all over the story. Don't even think about trying to put this musical novel down. Betty Baker Browning [is] the sweetest alter ego this side of Bedford Basin. Or in this life, oh sweet life. "

"The poetry itself is the thing, the overflowing energy of the language in this book — a profusion of rhetorical tropes and schemes and a breathtaking array of literary and cultural allusion. . . . Truly an original creation. It was probably fun to write; it is certainly a pleasure to read. "

"One of Canada's most important and readable poets. " — Salvatore Difalco, TORO Magazine