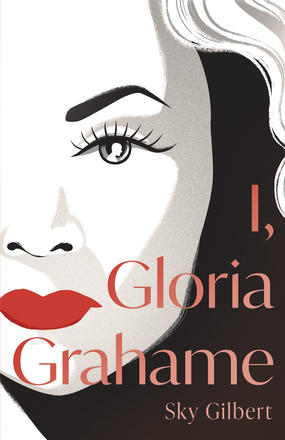 Shortlisted for the 2022 ReLit Award

A professor of English literature writes the autobiography of his fantasy alter-ego, wanton movie star Gloria Grahame, while his own sexual desires go frustrated.

Shortlisted for the 2022 ReLit Award

A professor of English literature writes the autobiography of his fantasy alter-ego, wanton movie star Gloria Grahame, while his own sexual desires go frustrated.

Denton Moulton — a shy, effeminate male professor — lives inside his head, where he is really a long-dead movie star: the glamorous Gloria Grahame, from the golden age of Hollywood. Professor Moulton is desperate to reveal Gloria’s shocking secret before he dies. Does he have the right to tell this woman’s story? Who, in fact, has the right to tell anyone’s story at all?

A scandalous, humorous novel of taboo desires and repression, I, Gloria Grahame alternates between Gloria’s imagined life with her film-director husband, Nicholas Ray, director of Rebel Without a Cause, and Denton’s increasingly frustrated real-life attempts to produce his own work of art: an all-male drag production of Shakespeare’s Venus and Adonis. The novel takes us from high-strung film sets to dark bars and the puritanical offices of government arts granting agencies, where Denton runs up against the sternest warnings that he may not, in fact, imagine himself as someone else, even in art.

Sky Gilbert is a writer, theatre director, and drag queen extraordinaire. He was the founding artistic director (1979 to 1997) of Buddies in Bad Times Theatre—one of the world’s longest-running gay and lesbian theatres. There is a street in Toronto named after him—Sky Gilbert Lane (you can google it!). He has had more than forty plays produced and has written seven critically acclaimed novels and three poetry collections. He has received three Dora Mavor Moore Awards, the Pauline McGibbon Award, and the Silver Ticket Award. His latest novel, Sad Old Faggot (ECW Press), was critically acclaimed. His book Shakespeare Beyond Science: When Poetry was the World will be published by Guernica Editions in 2020. He lives in Hamilton.

I, Gloria Grahame. It is certainly with a sense of some guilt that I write that. Or not guilt. Let’s just say that it seems a kind of false freedom, because I am not. I can only be her for a short while, while pen is put to paper, or perhaps I should say more accurately, finger to keyboard — when I am writing whatever this is. (I don’t call it anything, not even a diary or a journal, that would be too presumptuous. ) She is certainly not me, and I have no relationship with her other than the fact that I do imagine I am this particular storied Hollywood film noir star, and I write as if I were her occasionally. But no one sees that writing. If you are reading this it is probably because I have been arrested finally or put to death. Good riddance, as they say. But all I do is fantasize that I’m Gloria Grahame. I am not her. I’m a very different person from her, and it’s being completely honest to tell you that.

How do I begin to describe myself?

I have always been not very manly and somewhat invisible. Now that I am of a certain age, I wear hats and scarves, even in summer, and they serve to cover me somewhat, as I do not wish to be noticed. In fact, I wish to disappear; that is, short of dying. Why? It has basically become a little too much trouble to be alive. I think everyone reaches a point where that becomes the case and then they just die, one way or the other. That’s my terribly depressing theory. It isn’t that we outlive our usefulness or that nobody loves us, it’s just that it finally isn’t worth it anymore, the struggle. Anyway, first of all, or perhaps most of all, there is my voice. Have you ever heard Truman Capote’s voice? You might google it, and if you do, you will discover that even for the most dedicated homophile it is just a little too much. I can’t help it; I was born this way, to quote the great Gaga. When I open my mouth I betray myself. And yes, I always sashay a little bit, and there are mannerisms. But it is not a case of choosing to act this way; let me make that perfectly clear. If I had my way I would be someone else, I would be John Wayne, particularly the way he looked when he was young. (Did you know his real name was Marion?) Yes, I would prefer to be effortlessly masculine, which is the way I describe the type of man I am often attracted to. This makes me hopeless in a Quentin Crisp sort of way. I lust after the type of young man who would not be caught dead in public with me, which makes my case tragic, except of course for what you can get up to in private. But I pretty much don’t bother with that anymore, either. So I have become this haunted thing, or rather this thing that would wish to be haunted or hunted, or something, but what I am really is just the type of person who makes people feel uncomfortable and who they would like more than anything to ignore.

Some women like me. Some. (Others, I threaten. ) But it’s more as if they take pity on me, and that is perfectly fine, I, Gloria Grahame too, it’s something, anyway, it’s someone actually having an emotion in regards to me, or perhaps I should say having an emotion in my direction or at least in my general vicinity. Which is certainly better than nothing. Or is it? When I was younger I made an effort to hide it, there were the scarves and hats back then, too — which, when you come down to it, accentuated it more than anything — if one adds sunglasses then one has become Greta Garbo, certainly not a very butch self-presentation. But there was also an attempt to monitor the voice and the hands and the hips, that is to not be in any way myself, which I was sometimes successful at doing. Successful in the sense that people didn’t so much not know that I was effeminate, but they quite generally appreciated the fact that I was doing my best to cover it up. It was gracious of them to notice, and gracious of me to try. I was being considerate of their sensibilities, trying not to offend.

And then in those days I did not have tenure. That’s why I fought so hard for it, and now here I am teaching at a small university just outside of town. But I spend a lot of time in the city where I live. I spend a lot of time walking my dog, Poopsie. Yes, she is called Poopsie. Do what you want with that. The truth of the matter is that I would call her Poopsie, anyway, in private, so why not just make it public? It was bound to slip out, anyway. It’s all part of giving up. My last dog was actually named Rex, which was comical in its own way because he was also a miniature poodle. I could carry him around in a canvas bag, which I would do now and then, and even take him to class. The problem was he had cerebral palsy — yes, he did — and when I let him walk around the desk of the seminar room he would fall and quiver, and the students would think he was drunk. It was an interesting gauge of each student’s moral compass. Some would laugh, the boys usually — the effortlessly masculine ones — whereas the girls would punch the boys’ arms and be gushingly sympathetic to my little dog with CP. Anyway, calling this new little miniature poodle Poopsie is all part of giving up, the process of giving up who I am — while paradoxically being more publicly what I am. This is the beginning of a struggle not to exist anymore. Because though people might be able to tolerate a little poodle called Rex (there is, after all, humour in that) they are not about to care very much about one called Poopsie, and the male owner will be forever exiled from their consciousnesses. Out of sight, out of mind.

I hope you will applaud me in this end-of-life project; to fade from view long before I die. After all, it is quite evident that no one wants to see or hear from me anymore. In disappearing, I’m really just complying with the general zeitgeist. I’d ask for your advice — but you are, in fact, not there. I have just made you up in order to calm myself down. There must be someone reading this, even though it will never be read. And as I have imagined this, I also have imagined you, the same way I have imagined Gloria Grahame. You are somewhat sympathetic, but slightly frightened by me, and perhaps a bit confused? Because it seems to me that when I write as Gloria Grahame I am also able to write myself.

What does it mean to write yourself? It means what every writer knows: that they do not exist anywhere else but on paper, in the characters they create. That’s true for me more so than anyone. Even T. S. Eliot — who was apparently nondescript and worked in a bank — was not as nondescript as me. Except for the afflictions that are my face, my body, my age, my fluttering hands. What happens to me is I come home after a hard day at school (it’s two classes a day, twice a week — it must be admitted, I have absolutely nothing to complain about), and I am discouraged by the petty nothingness of my life, at how small even my humiliations are. And then I sit down and write this. I create. And everything that causes me discomfort, everything that causes me pain, is suddenly glorious. Glorious Gloria.

I, Gloria Grahame is that rarest of literary things, a sharp satire of these tremulous times that actually makes one laugh. It's brave, it's shocking, it's compelling, and best of all, it's not too long. It's De Profundis for the beach.

Sky Gilbert’s new novel I, Gloria Grahame, is my favourite novel of the year. .. The satire is sharp and salty.

Other titles by Sky Gilbert