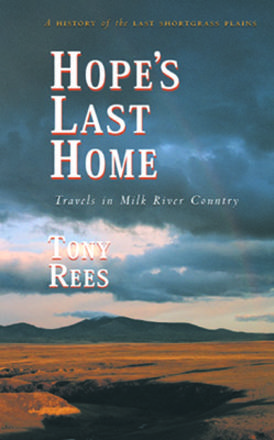 South of Lethbridge, Alberta, Highway 62 climbs from the floor of an ancient glacial lake to the crest of a low ridge, crosses a continental divide and drops to meet the Milk River arching up from Montana.

The austere, dry land within this great three-hundred-mile ellipse is ... Read more

South of Lethbridge, Alberta, Highway 62 climbs from the floor of an ancient glacial lake to the crest of a low ridge, crosses a continental divide and drops to meet the Milk River arching up from Montana.

The austere, dry land within this great three-hundred-mile ellipse is home to the continents last vestiges of shortgrass plains and holds a history unique in all the Americas.

Now parts of Montana, Alberta, and Saskatchewan, Milk River country has been at the centre of the epic boom-and-bust extremes that gave final shape to the Prairie West. It was the place where the last continental glaciers stalled and began to die. It was the ancient domain of the Blackfoot and Assiniboine peoples, and then, in the 150 years it took to settle the course of European empire in North America, it lived under the flags of five nations—France, Spain, Great Britain, the United States, and Canada.

It was here, as European settlement encroached, that the remnant buffalo, the prairie wolf, and the plains grizzly waited out their final days. It was here that Sitting Bull and Little Soldier and Chief Joseph drew the final curtain on the brilliant horse cultures of the plains nations, here that cattlemen found their last free range, and here that the brief dreams of the last homesteaders dried up and blew away.

Originally published in 1995 and short-listed for the 1996 Writers Guild of Alberta's award for nonfiction, Hope's Last Home is one of the very best books ever written about the West, an intimate journey into the fascinating history of a final frontier.

Tony Rees was born in Great Britain in 1948 and came to Canada in 1957. Educated at the University of Western Ontario, he held an MA in 17th Century English Literature. Formerly Archivist - Fine Arts and Supervisor of the City of Toronto Archives, he moved west in 1981 to become the first City Archivist for the City of Calgary. He later served as Records Manager for the 1988 Calgary Winter Olympic Games and for seven years as Chief Archivist at Calgary's Glenbow Museum. He died in 2012.

Beautifully realized essays on the history, pre-history, and natural landscape of the region. —Legacy Magazine