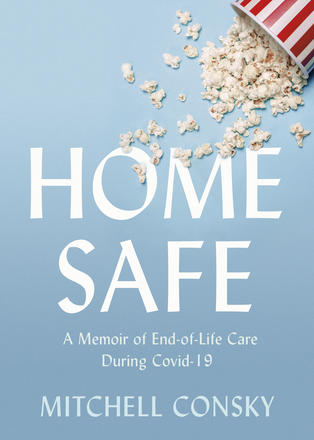 During a pandemic lockdown full of pyjama dance parties, life talks, and final goodbyes, a family helps a father die with dignity.
In April 2020, journalist Mitchell Consky received bad news: his father was diagnosed with a rare and terminal cancer, with less than two months ... Read more

During a pandemic lockdown full of pyjama dance parties, life talks, and final goodbyes, a family helps a father die with dignity.
In April 2020, journalist Mitchell Consky received bad news: his father was diagnosed with a rare and terminal cancer, with less than two months to live. Suddenly, he and his extended family — many of them healthcare workers — were tasked with reconciling the social distancing required by the Covid-19 pandemic with a family-based approach to end-of-life care. The result was a home hospice during the first lockdown. Suspended within the chaos of medication and treatments were dance parties, episodes of Tiger King, and his father’s many deadpan jokes.
Leaning into his journalistic intuitions, Mitchell interviewed his father daily, making audio recordings of final talks, emotional goodbyes, and the unexpected laughter that filled his father’s final days. Serving as a catalyst for fatherly affection, these interviews became an opportunity for emotional confession during the slowed-down time of a shuttered world, and reflect how far a family went in making a dying loved one feel safe at home.

Mitchell Consky is a journalist with works published in the Globe and Mail, the Toronto Star, the Walrus, and BNN Bloomberg. He specializes in long-form feature writing and essays about loss, travel, and adventure. When not working, his ideal escape is drifting on a canoe in Ontario’s Algonquin Park. He lives in Toronto.

Two Masks
April 2020
Our car rolled into the parking lot of the North York General Hospital’s emergency department. There was a tunnel outside the entrance covered in tight black plastic. Three security guards stood at the front of it, wearing face masks and plastic face shields.
We wondered if there was a separate entrance for patients without Covid symptoms. I got out of the car to ask one of the security guards. The moment I approached, one of them took a step back.
“Is there a separate line for non-Covid patients?” I called through my mask, standing a good distance away.
“All emergency patients go through here,” one called back.
“Only the patient is allowed in. ”
I went back into the car. “Dad, you need to go through that tunnel,” I said. “They won’t let anyone else come with you. ”
He nodded, and I squirted some hand sanitizer into his hands. I gave him the mini-bottle, and he slid it into his pocket.
“Don’t touch anything,” called Mom in the driver’s seat. “Especially not your face. ”
“Why not?” Dad said, playing dumb.
The whole ride up he had been cracking lame jokes to calm us down. Things like, “Look … whatever this is … at least I still have two arms,” referring to the one-armed zookeeper in Tiger King, the Netflix docuseries we binge-watched days before. Then … “Oh fuck, a tiger!” he called, thrashing around in his seat with a reusable grocery bag on his arm.
“Cut it out, Harvey!” Mom barked. “I’m driving!”
Boyish humour had long been his way of coping with stress, and a method for easing the anxieties of those around him. He was wearing two masks — one to protect him from the virus, and one to protect us from worrying. One wasn’t on properly — I adjusted the elastic over his ear after we got out of the car. The other was ineffective.
“Trump says the virus is a hoax,” he added. “Why would he lie? He seems like a real straight shooter!”
“Not funny, Harv,” Mom called with an eye roll.
And it wasn’t. On this day, New York state would confirm its highest daily total of first-wave fatalities: 1,028 people would die from complications related to the coronavirus in that state alone. The numbers coming out of Europe were even worse. In Toronto, the epicentre for the SARS epidemic, we were desperately hoping we wouldn’t follow suit.
Dad’s glasses fogged up a little, and the two of us walked toward the entrance as Mom waited in the car. It was a blue-sky morning, and sunlight beamed down on us.
“I love you, Dad,” I said.
“I love you more,” he replied. “And don’t argue. ” That’s what he always said to my mom, sister, and me. He loved us more, and that was final.
For a moment, those hazel eyes behind his foggy lenses made him look younger than the sixty-seven-year-old he was.
There was a furrow in his brow, a tightness in his jaw, but his cheeks forced a smile beneath the fabric covering his mouth — he was adjusting his other mask. “I’ll be okay,” he said.
“I know you will … No tigers in there. ”
Dad nodded. Then he walked through that black tunnel alone.

This journey of a grown son letting his father go is meaningful for us all as we face grief and loss. Although a memoir about dying, there are elegantly written lessons about living: of being thankful for the simple moments; of finding joy despite overwhelming sorrow, and realizing they are compatible. Consky was fortunate to have had a father filled with such love and laughter.

America has Mitch Albom’s Tuesdays with Morrie. Canada now has its own Mitch, Mitch Consky who has written Home Safe, a tribute to his father. Consky manages to convey deep love for his father who devoted all he had to his family. As you read it, you long to have the closeness and constant support that this father gave the children.

In capturing the resilience, the philosophizing, and the joking around of family and friends, Consky’s heartfelt, tender memoir embraces the ultimate realization that dying is indeed part of living, especially for a young man losing his father before his eyes.

An intimate, raw and honest look at what it was really like to grapple with end of life care and loss during unprecedented times. This amazingly hopeful book illuminates these unimaginable circumstances while reminding us that love, even in the face of darkness, brings so much light.

On the surface, this a memoir about a son watching his father’s brutal 2 ½ month descent from cancer diagnosis to death, during the dark days of the pandemic, no less. But Home Safeis really an intimate reflection on grief, loss and the burden of keeping memories alive. A must-read for anyone who wishes they had been able to spend just a little more time with a loved one in their final days.