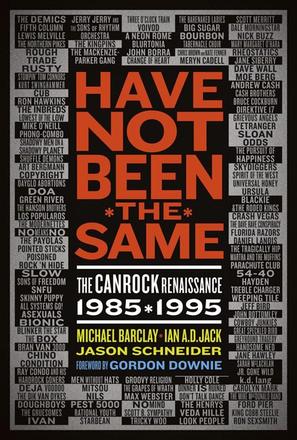 Have Not Been the Same (rev)

Have Not Been the Same (rev)

?Published in autumn 2001, Have Not Been the Same became the first book to comprehensively document the rise of Canadian underground rock between the years 1985 and 1995. It was a tumultuous decade that saw the arrival of Blue Rodeo, The Tragically Hip, Sarah McLachlan, Sloan, ... Read more

?Published in autumn 2001, Have Not Been the Same became the first book to comprehensively document the rise of Canadian underground rock between the years 1985 and 1995. It was a tumultuous decade that saw the arrival of Blue Rodeo, The Tragically Hip, Sarah McLachlan, Sloan, Barenaked Ladies, Daniel Lanois, and many others who made an indelible mark not only on Canadian culture, but on the global stage as well. Have Not Been the Same tells all of their stories in rich detail through extensive first-person interviews, while at the same time capturing the spirit of Canada’s homegrown music industry on the cusp of the digital age.

Ten years on, the 780-page book is still regarded by critics and musicians as the definitive history of the era. To mark this milestone, the authors have updated many key areas of the book through new interviews, further illuminating the ongoing influence of this generation of artists. And with its treasure trove of rare photos intact, this revised edition of Have Not Been the Same is sure to maintain the book’s status as one of the seminal works in the field of Canadian music writing, and a must-read for any Canadian music fan.

You Can Come From Here

One of the most revolutionary changes wrought by the CanRock renaissance also stems from folk, something so obvious that it seems incredulous that it should even be an issue. But before 1985, Canadian rock acts rarely ever sang specifically about their own country, avoiding place names or other signifiers like a plague.

There are plenty of theories as to why this was. Perhaps bands didn’t want to appear “far too Canadian,” to borrow a phrase from Spirit of the West, because Canadianisms were the epitome of uncool in a scene that still pined to be anywhere else but here. For more commercially minded bands, perhaps they made a decision, conscious or not, to make their songs more “universal” and not limit them to Canada. When the Tragically Hip became superstars in Canada and nowhere else, some crippling culture commentators on both sides of the border suggested that the band’s fate was doomed to their own country because of Gord Downie’s choice of subject matter. For a songwriter like John K. Samson, however, “Gord Downie has such a remarkable and original voice, both on the page and in the air. He certainly made a great contribution to songwriters in this land. The Hip made all the difference. There was suddenly less striving, less grasping. People were more comfortable with who they are and where they’re from. ”

Of all the prominent Canadian rock musicians to come of age in the ’60s — if you relegate Gordon Lightfoot, Ian & Sylvia and Leonard Cohen to the folk world — only the Guess Who made a point of “Runnin’ Back to Saskatoon,” although their biggest hit, “American Woman,” was Canadian only as reflected through a negative, by defining Americans as an “other. ” Otherwise, Joni Mitchell and Neil Young only slipped into Canadian specifics when they were homesick ( as in “River” and “Helpless,” respectively ); Robbie Robertson was too wrapped up in American mythology to bother with his native land. British writer Barney Hoskyns, author of a biography of the Band, notes that the first lyrical manifestation of Robertson’s roots was “Acadian Driftwood,” written at the Band’s twilight. “It took Robbie Robertson almost a decade of living in America to write a song about Canada,” Hoskyns writes in Across the Great Divide. “Sitting in his Malibu beach house in the summer of 1975, he was writing about his homeland with the same empathy and compassion that had infused ‘The Night They Drove Old Dixie Down. ’ Canada had finally become as distant and romantic to Robertson as the American South had seemed to him back in 1960. ” With this evidence forming Canada’s musical canon, it’s no wonder that it took years to overcome this cultural insecurity in song.

“In Canadian music,” says Kurt Swinghammer, “there was always a sense that if you wanted to be successful, you had to hide the fact that you’re from Canada, which is so stupid. It’s way more accepted now. Maybe that’s just part of the evolution of a culture that’s still young and growing and shaking off some insecurities about where it’s from. ”

“I’ve always loved peculiarities and regionalism in stories,” says Joel Plaskett, who was a budding teenage songwriter when he saw Sloan’s second show. There, the band played a song called “Underwhelmed,” which referenced a girl who tells the narrator to loosen up on his way to the L. C.— a reference to the liquor commission of the province. “You don’t call the liquor store the ‘liquor commission’ in the States or in any other province except Nova Scotia, and I thought that was the coolest thing I’d ever heard. I thought it was beautifully insular, and it totally spoke to me. ”

John K. Samson grew up admiring the Prairie pop band the Northern Pikes, both for their early independent success and the way they “crafted really remarkable songs and wrote about small towns and cities in an unpatronizing way. ” But it was hearing two artists from Toronto — a city which, Samson admits as a Westerner, he was raised to despise — changed the way he thought about writing locally. “The Rheostatics were a big deal to me,” he says. “They sang about things that I didn’t think people could sing about, while making this beautiful and unique music. They could have been from Austin, Texas, as far as I’m concerned: Toronto was so far away for me; it was a foreign land. And hearing Ron Hawkins of Lowest of the Low sing about the Carlaw Bridge [ in Toronto ] or places that I’d never been to certainly reinforced the idea that I could write about the places that I was from, that it wasn’t unrealistic or a stupid idea. There were writers here [ in Winnipeg ] at the time who were enforcing the same thing, but mostly they were poets and fiction writers. Those Toronto people reinforced that it could be done in a musical way. ”

Tom Wilson of Junkhouse and Blackie & the Rodeo Kings welcomed the change. “People like Blue Rodeo and Gord Downie have been embraced in such a huge way,” says Wilson, “that suddenly you didn’t have to be singing about the Mississippi River or have a poncey British accent to get your point across. You could sing about Lake Ontario or wheat kings or do what the Rheostatics do so fabulously well. That became really important to a generation of listeners. In the early ’90s, it was a rediscovery. It’s all there: we should stop being so British and asking what our identity is, stop worrying about how many books or records or movies we sell in the States, and be happy with who we are. ”

John Critchley of 13 Engines says, “We were proud to be from Canada and we definitely had Canadian influences in our music, as well as others from around the world. I’m proud of where I’m from and I’ve written songs about where I’m from. But I don’t think music and politics should be confused. You should be proud of where you’re from and write about what you know. ” But, he adds, sometimes doing so runs the risk of jingoism.

“There is, without a doubt, no better book on the rise of popular Canadian music in the 1980s and 90s than Have Not Been The Same. . . . The exhaustively researched and referenced text gives readers a front- row seat to the spectacle of the burgeoning Canadian rock and pop music scene as it began to exert significant influence internationally for the first time ever. ” — Scene Magazine

“[A]n insightful and penetrating look at the roots of the Canadian underground rock scene . . . anyone with a curious interest in Canadian music will appreciate this well-researched book, which is largely culled from players in the scene at the time, and it’s a credit that the authors were able to gain access to so many people in compiling the book. ” — Pop Matters

“Barclay, Jack and Schneider are all musicians and write about Canadian music from the inside. They survey the music from the perspective of informed fans, as opposed to dispassionate critics, and they do it with energy, enthusiasm and devotion. ” — Waterloo Region Record

Other titles by Michael Barclay