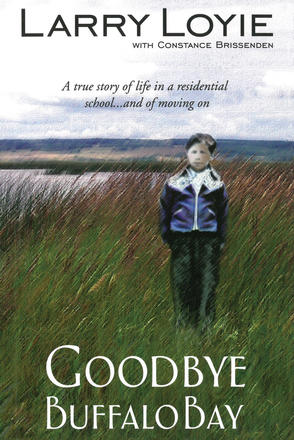 By Larry Loyie
With Constance Brissenden

Drama and humour combine in Goodbye Buffalo Bay by award-winning Cree author Larry Loyie. The sequel to the award-winning book As Long as the Rivers Flow and the award-finalist When the Spirits Dance, Goodbye Buffalo Bay is set during the author's teenaged years. In his last year in residential school, Lawrence learns the power of friendship and finds the courage to stand up for his beliefs. He returns home to find the traditional First Nations life he loved is over. He feels like a stranger to his family until his grandfather's gentle guidance helps him find his way. New adventures arise; Lawrence fights a terrifying forest fire, makes his first non-Native friends, stands up for himself in the harsh conditions of a sawmill, meets his first sweetheart and fulfills his dream of living in the mountains. Wearing new ice skates bought with his hard-won wages, Lawrence discovers a sense of freedom and self-esteem. Goodbye Buffalo Bay explores the themes of self-discovery, the importance of friendship, the difference between anger and assertiveness and the realization of youthful dreams.

Larry Loyie was born in Slave Lake, Alberta. He lived a traditional Cree life until he was eight years old, learning from his elders, many of whom he has written about in his childrenâ??s books. He has a website abailable here: www.firstnationswriter.comThe â??Lawrence Seriesâ? books are based on Larry Loyieâ??s traditional Cree childhood. The Moon Speaks Cree (Theytus, 2013) is a winter adventure, a traditional time of family, learning and imagination, when toboggan dogs were part of everyday life.From the age of eight to 14, Larry Loyie attended St. Bernard Mission residential school in Grouard, Alberta. At 14, he entered the work force, fighting fires, working in an oil camp and a mountain sawmill.He writes about his years in residential school and moving on in Goodbye Buffalo Bay (Theytus, 2008). This engaging chapter book is the sequel to As Long as the Rivers Flow (Groundwood), winner of the Norma Fleck Award for Canadian Childrenâ??s Non-Fiction. Goodbye Buffalo Bay is a popular choice for novel and classroom study.Larry Loyie is an invaluable resource on the history of residential schools in Canada. He is a survivor who has spent many years researching and writing about this hidden chapter in Canadian history.When the Spirits Dance, A Cree Boy's Search for the Meaning of War(Theytus, 2010), set during the Second World War, is based on the authorâ??s traditional Cree childhood when his father left the family to serve with the Canadian Army. It is a family story of universal interest in the discussion of the effects of war.The Gathering Tree (Theytus, 2005) is a bestselling work of fiction informed by Larry Loyieâ??s first-hand knowledge of Aboriginal culture and approaches. Winner of the 2012 Silver Medal (Health Issues) from Moon beam Children's Book Awards, The Gathering Tree encourages HIV awareness and prevention. Impressive, authentic illustrations by Heather D. Holmlund enhance the story. Included are 15 questions and answers in reader-friendly language prepared by Chee Mamuk, the Aboriginal education arm of the BC Centre for Disease Control.Larry Loyieâ??s books have been honoured by the First Nation Communities Read program and other awards and award-nominations. They are Highly Recommended by CM Magazine, Books in Print and other publications. His books are found on curriculums and recommended reading lists across Canada. Study material for each book is included on his website: http://firstnationswriter.comLarry Loyie went back to school at the age of 55 to achieve his lifelong dream of becoming a writer. He is an active proponent of literacy and learning. With his partner, writer and editor Constance Brissenden, he launched Living Traditions Writers Group in 1993 to encourage Aboriginal writing. Together Larry and Constance have given more than 1,400 workshops, talks and presentations in schools, libraries, at writerâ??s festivals and conferences. Larry Loyie is also available for Skype school visits.

Constance Brissenden, BA (UofGuelph), MA (UofAlberta, Theatre) has written with Cree author Larry Loyie since 1993. A non-fiction writer and editor of more than 14 books of history and travel, she was a writing instructor in Simon Fraser University's Writing & Publishing program for 18 years. Constance Brissenden met Larry Loyie in a creative writing class at the Carnegie Community Centre in Vancouver's Downtown Eastside. She directed Larry Loyie's first play, Ora Pro Nobis, Pray for Us, performed in Vancouver as well as five federal prisons in the Lower Mainland of British Columbia. In 1993, Larry Loyie and Constance Brissenden launched Living Traditions Writers Group to encourage writing in Aboriginal and other communities. A lifelong freelancer, Constance Brissenden continues to write, edit and teach writing and theatre. Together with Larry Loyie, she gives presentations on his books and co-teaches writing workshops.

Like many of the tens of thousands of First Nations, Inuit and Metis children who were taken from their families and sent to residential school for years, Lawrence felt like a stranger in his community when he returned, questioning both his place and his role in the world. But with the help of his grandmother and grandfather and the experiences he had while working at his first jobs, Lawrence gets stronger, takes pride in himself, and learns to feel like a part of his family and community again. Goodbye Buffalo Bay is based on the author's life at a residential school. A short epilogue in the back of the book, as well as a three page section entitled, "A Brief History of Residential Schools," explain why these poorly funded schools opened, how they operated, and why they were finally shut down. Other back matter in this book includes a small Cree glossary and a website link where readers can see photographs of students and activities at a residential school. Highly Recommended.

Other titles by Larry Loyie

Other titles by Constance Brissenden