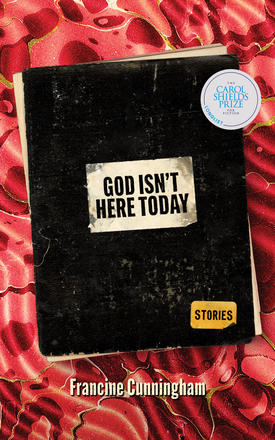 Driven by desperation into moments of transformation, Cunningham’s characters are presented with moments of choice—some for the better and some for the worse. A young man goes to God’s office downtown for advice; a woman discovers she is the last human on Earth; an ice cream vendor is driven insane by his truck’s song; an ageing stripper uses undergarments to enact her escape plan; an incubus tires of his professional grind; and a young woman inherits a power that has survived genocide, but comes with a burden of its own.

Even as they flirt with the fantastic, Cunningham’s stories unfold with the innate elegance of a spring fern, reminding us of the inherent dualities in human nature—and that redemption can arise where we least expect it.

Francine Cunningham is an award-winning Indigenous writer, artist and educator. God Isn't Here Today is her debut collection of short fiction, and her debut book of poems On/Me (Caitlin Press) was nominated for the BC and Yukon Book Prize, the Indigenous Voices Awards, and the Vancouver Book Award. She is a winner of the Indigenous Voices Award in the 2019 Unpublished Prose Category and of The Hnatyshyn Foundation's REVEAL Indigenous Art Award. Her fiction has appeared in The Best Canadian Short Stories 2021, in Grain Magazine as the 2018 Short Prose Award winner, on The Malahat Review 's Far Horizons Prose shortlist, and in Joyland Magazine, The Puritan and elsewhere. Francine is a graduate of the Creative Writing MFA program at the University of British Columbia, and currently resides in Alberta. Learn more at www.francinecunningham.ca.

The note was posted on the door. It was scratched out in ink that faded near the end, like the pen had decided to dry up at just that moment. You could see the swirling lines where a heavy hand had tried to force more ink out, then gave up in an indented trail that petered off the edge of the page. The note itself was taped up in a tilted line, as if the taper had done so in a hurry and only as a last-second precaution in the unlikely event a person, like myself, bothered to show up at the door. I gently peeled the note off the white wood, brought the paper up to my face, and rested the tip of my nose against it, to study the words of God closer.

The letters were shaky, as if written by a trembling hand. The ERE all blended together in a mess of lines. The Y longer than all the other letters, stretching halfway down the page. I knew there was a branch of science you could take that analyzed writing, could let you know if someone was a serial killer, a mom, a firefighter. But since God is all of these things, I guess the handwriting meant nothing more than what is said: God isn’t here today.

The only day I’d ever bothered to go down to God’s office.

The only day I’d ever actually needed God.

"Cunningham's characters find light in darkness, music in silence, and moments of transformation when they least expect it. "—The Quarantine Review

"This is a fierce collection: fiercely smart, fiercely funny, fiercely inventive. Francine Cunningham takes the reader from strip clubs to God’s waiting room, from a tormented ice cream truck driver to a bored ghost with career aspirations. This collection almost reads like a novel, as the characters move in and out of each other’s stories—sometimes solo, sometimes in chorus—spilling out their tormented, glorious, messy lives to the lucky, greedy reader. "—Annabel Lyon, author of Consent

"Cunningham is uniquely funny even through homophobia, whorephobia, death and aching loneliness. .. Opening this collection feels like stepping into a lively discussion between friends you’ve known since kindergarten when someone is already mid-rant, in a good way. ”—Sarah Ratchford, Maisonneuve

"The stories in God Isn’t Here Today reveal Francine Cunningham as a gimlet eye observer of humanity, with boundless empathy and a searing sense of humour. The prose is intimate and direct, like an honest best friend breathlessly telling all, while embarking on formal experimentation that guides the reader through the grand possibilities of fiction. "—Doretta Lau, author of How Does a Single Blade of Grass Thank the Sun?

"God Isn't Here Today is a collection, I feel, that is whispered in the calligraphy of ghosts. Cunningham continues to both astound and haunt all who discover her. Wow!"—Richard Van Camp, author of The Lesser Blessed

"A humorous and compelling piece on the art of conviction and manipulation, both binaries were excused in two different voices that belonged to the same person. The voice of the unconvinced guru as he succeeds in amassing a following was simultaneously profound in its social commentary and comedic in its doubts. "—Rawi Hage, author of De Niro's Game and Beirut Hellfire Society on the story "Starting a Religion"

"Reading Francine Cunningham’s 'Complex 2675' reminded me of Twin Peaks: dark and surreal, with high emotional stakes edging on satire, and intense visuals. .. I recommend reading it with the slow pacing those old nineties TV shows had, and a sense of weird foreboding. "—Carleigh Baker, author of Bad Endings 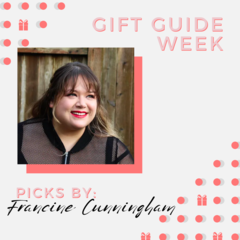 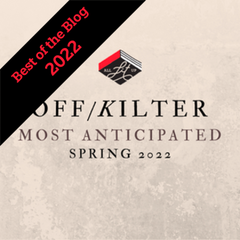 Other titles by Francine Cunningham