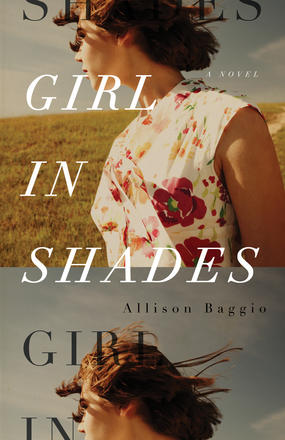 Sweetly funny and deeply perceptive, Girl in Shades offers a fresh take on what it is to grow up and discover who you really are

Maya Devine has a strange ability to see colors that ... Read more

Sweetly funny and deeply perceptive, Girl in Shades offers a fresh take on what it is to grow up and discover who you really are

Maya Devine has a strange ability to see colors that surround other people — and sometimes even to hear the thoughts in their heads. But even with these gifts, she still struggles to understand her mother, Marigold. Desperate for enlightenment, Marigold drags Maya to library lectures on making money and gardening as part of her home schooling; attends AA meetings even though she never has more than two drinks at a time; and conscripts Maya for the very personal crusade of spreading the words of the Bhagavad Gita from street corners.

When Marigold is diagnosed with cancer and vows to spend her final days in the tepee she’s set up in the backyard, neighbors and strangers — believing the dying Marigold to be a prophet — camp out in the family’s front yard. As her father grows ever more distant, Maya finds solace in the music of 1980s teen idol Corey Hart — but as she faces her losses, she must eventually find a vision for her future on her own.

Allison Baggio’s fiction and commentaries have appeared in publications all across Canada, including Room, subTerrain, Today’s Parent and the Toronto Star. She is a graduate of York University and the Humber School for Writers. Girl in Shades is her first novel. She lives in Whitby, ON.

My father’s shiny shoes squeak on the floor as I follow him down the stairs at the end of the hallway, through the front lobby and out the entrance doors. On the other side, the August sun attacks my eyes. I suck in humid air and cough when I release it.

A news reporter, cameraman, and a small crowd of women wait in the parking lot of the hospital. They have signs that say, “Prayer Can Save a Life,” “Tragedy of 1985,” and “Marigold, You Are Divine. ” When we walk by, a woman thrusts a microphone close to my father’s lips.

“Mr. Devine, can you give us a quick update on your wife’s condition?”

“My wife’s condition …” he holds me behind him with his arm, “… has deteriorated to the point of expiration. ”

Then he grabs my wrist and pushes us past the lady, bumping her with the side of his body. Someone behind us starts to cry and I turn to look at her: large hips, permed hair, bouncing shoulders. “Be strong, dear!” she shouts out to me. “You have two angels watching over you now!” I don’t turn back as we stagger across the concrete. I don’t want to tell her the truth, that I’m not sure if Mother ever did enough nice things to become an angel.

When we are seated in my father’s car, and the leather seats have attached themselves to my thin legs, he speaks. “I was glad they let you stay in there by yourself. Those damn nurses didn’t think you were old enough, but I told them you were a hell of a lot more mature than any eleven-year-old I knew. ” He reaches out to touch the top of my hand, but then pulls away.

“It was fine,” I answer without looking at him. “I’m almost twelve. ” He turns the key in the ignition and the engine sputters, then stops.

“Fucking piece of shit,” my father says and I shoot him a stare that fills the entire inside of the car. “Sorry,” he says. I glimpse the colour swirling around his head, brownish and muddy like a river after a storm. He has no idea what he is in the middle of.

He tries to start the car again and this time it goes, winding up to spew cool air into my face from a vent on the dash.

We say nothing, express nothing.

As we drive home, I concentrate on the world through the glass of the window. Trees, buildings, cars, all a blur to me — Saskatoon has never seemed so big. When we drive over the river, I look down into the water at a person in a silver boat. Is he waving at me? Or is he just sitting there, alone, waiting for something to happen?

Emerald Crescent looks the same as when my mother lived there, houses lined up behind green lawns, fathers starting mowers and whackers, cats laid out on the sunny sidewalk. A couple of kids run through a sprinkler in the grass, screeching each time the water sprays the naked parts of their bodies. Their mother sits on the front step, smiling at the rainbows growing in the mist above their heads.

When we reach our house, the windows from my bedroom look like eyes and the door, a closed mouth. We fill the empty driveway and get out; two car doors slam. No one greets us.

“We’re not taking it down,” I tell my father.

“The teepee. It’s staying there. Maybe forever. ” I’m surprised to be feeling sentimental about the stained pieces of tarp holding in the stinky space where my mother gave up on her life.

I have not won the argument — teepee or not, my mother is not coming back. And this man I call my father, this man fumbling with the lock on the front door of my house, makes me feel like I have just been orphaned.

“You must be hungry,” he says in the kitchen, taking a box of Kraft Dinner out of the cupboard and shaking it in the air. Its rattle scrapes against my backbone, causing me to wince in irritation.

“I’m going to sleep for a while then,” my father says, throwing the box on the counter and whipping his tie out of his collar. “We’ll talk later. ” His voice shakes a bit when he says it. He hobbles away from me and up the stairs, a defeated man, leaving me with nothing but the smell of his aftershave — cedar and citrus. I wrinkle my face until it fades. I wonder then if it was true what Mother said before she went, that she didn’t deserve him. And if he meant what he said back, that he wasn’t a very good husband.

“Baggio has a well-accomplished background in writing, which helps explain her undeniable talent. ” — Whitby This Week

“Baggio’s colorful writing and quirky imagery give life to the story as a whole, propping up even the direst of circumstances … It’s not outwardly funny, but quietly humorous, like the whole thing is an inside joke between the reader and the author. ” — The Weekender

“An intimate, character driven drama … Girl in Shades is a poignant coming of age story as Maya struggles to understand and overcome the truths and lies that define her. ” — Book’d Out

Other titles by Allison Baggio