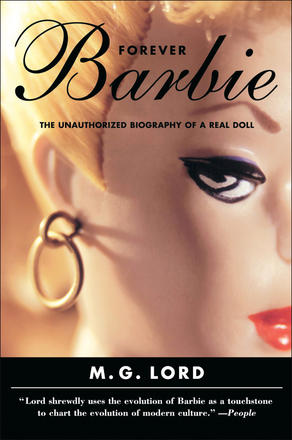 Was Barbie the first feminist doll? She always worked in interesting positions, never married, never had a child, and never did house work. Yet today, many women who played with Barbie when they were children consider her to be an inappropriate role model, although these same ... Read more

Was Barbie the first feminist doll? She always worked in interesting positions, never married, never had a child, and never did house work. Yet today, many women who played with Barbie when they were children consider her to be an inappropriate role model, although these same women often have interesting Barbie stories to tell.

In Forever Barbie, cultural critic, investigative journalist, and first generation Barbie owner M. G. Lord tells Barbie's own story with clarity and intelligence, brilliantly shaking up many preconceptions. According to Lord, Barbie's phenomenal endurance says as much about our culture's ambivalence towards femininity as it does about Mattel's successful marketing of the convention-defying toy. In this witty and provocative book, she unearths Barbie's low origins as "Lili," a sexy doll for grown ups sold as a gag gift in post-war Germany, and follows her development through countless makeovers and career changes into a "traditional toy" and ultimately an international pop-culture icon.

Interviewing the toy-company executives, fashion designers, and merchandizing geniuses who helped mould Barbie into what she is today, Lord takes a seriously wry look at the polyvinyl goddess who attracts as many detractors as die-hard fans. This new edition, the first to be published in Canada, features an up-to-date introduction envisioning a Ken-less Barbie in post 9/11 era and examining the controversial reaction to pregnant Midge.

"What fascinates about Lord's book is her assertion that Barbie is, in fact, a feminist icon . . . Love her or hate her, there's little chance a reader can walk away from Forever Barbie without rethinking her preconceived idea of the doll and what it represents. Infused with humour and surprising facts, it's a perfect piece of pop-culture history. "

"Lord summarizes the politics around Barbie in a way that is both telling and inflammatory . . . The smartest book one could imagine on this topic. It is a book both Barbie's detractors and her fans should put near the top of their to-be-read list . . . Lord takes her subject beyond any biography, however, delving into the aspects of popular culture that have shaped Barbie as well as those aspects of Barbie that have, indeed, shaped our culture. "