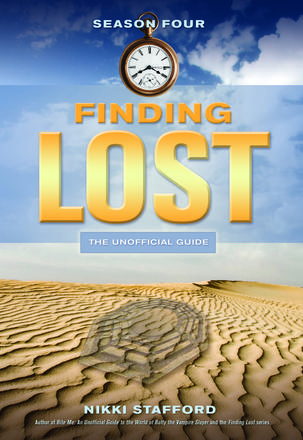 “The Finding Lost series is quite simply the best Lost resource for fans. Not only is the information concise and complete, Nikki Stafford’s commentary is insightful, relevant, and entertaining. No matter how well you know the show, Stafford’s analysis of the themes and ... Read more

“The Finding Lost series is quite simply the best Lost resource for fans. Not only is the information concise and complete, Nikki Stafford’s commentary is insightful, relevant, and entertaining. No matter how well you know the show, Stafford’s analysis of the themes and symbolism of Lost will renew your desire to go back and watch over, and over again. ” — Jon “DocArtz” Lachonis, BuddyTV. com

Lost, the Golden Globe and Emmy Award-winning hit television show, has become renowned for its complexity week after week, enticing both cult and mainstream fans to figure out the keys to some of the mysteries. There are several Lost books on the market, but Stafford’s Finding Lost series is recognized by fans as the only book to cover each episode in-depth, as well as provide chapters on books referenced on the show, historical figures, religious iconography, and other background materials that put her readers far ahead of other viewers.

Now, in Finding Lost — Season Four: The Unofficial Guide, Stafford continues to delve into the mysteries of this show. Season 1 was about trying to get rescued; season 2 was about adapting to the island; season 3 about the tension between the Lostaways and the Others. Season 4 is the turning point in the series, pointing fans to the future through flashforwards, rather than to the past. The Season Four guide will contain analyses on the Oceanic Six, how the time travel theories play into the greater mysteries on the show, how different characters are starting to come together, and point the way to how this series could possibly end. It will include chapters on the books alluded to this season (The Tempest, Slaughterhouse Five, Valis) and give background into new philosophical and scientific references. With exclusive photos of the show’s filming locations in Hawaii, as well as ones taken on the set, this book helps both casual and diehard fans “find” Lost.

Season 1 of Lost was immensely popular. But by season 2 the ratings had begun to decline. This was either thanks to the inefficient scheduling of episodes (a couple of weeks of new episodes followed by a month of reruns, then three weeks back on and three more weeks of reruns) or thanks to the exposition of the story lines and the deepening of the mysteries (with no answers) that had fans scratching their heads. By season 3, when the network aired six episodes that were heavy on the Others, Kate, Jack, and Sawyer, and very light on everyone else, and when they ran the rest of the season a full three months later, those fans who were already frustrated by the show jumped ship, which left only the hardcore fans behind.

Thank goodness we stayed. We’ve loved Lost unbendingly from the beginning, but season 4 was mind-blowing.

In fact, the fourth season won back many viewers. Reduced to a mere 13 episodes due to the WGA Writers’ Strike, this season was short, but packed with intrigue, drama, mysteries, and answers. During an interview I did while the Writers’ Strike was on, a journalist asked me why I thought season 4 was getting great ratings and was so critically acclaimed. Was it because of the strike?, he asked. I said the answer was manifold. Yes, the Writers’ Strike (which lasted from November 2007 to February 2008) created a dearth of new programming in January and February, precisely the time Lost began rolling out brand new episodes. Or it could have been the timing of the DVDs. In previous seasons, new fans of the show would buy the DVDs when they came out — usually around September 7 or 8 — and try to make it through the episodes in two weeks before the new season started. But unless you’re a die-hard television viewer, such a schedule could be tough. When some viewers couldn’t finish the season, they wouldn’t dare begin the new one. So, they’d wait for the next season’s DVDs to come out a year later. These fans wouldn’t be counted in the ratings for that season. For season 4, however, the previous season’s DVDs were released on December 11, and the new season didn’t begin until January 31, giving new fans plenty of time to watch not only season 3, but the first two seasons as well.

But in my opinion, the main reason the new season was so good is because showrunners Damon Lindelof and Carlton Cuse have an end date. ABC has done the unthinkable and given them an end date of 2010, with three seasons of 16 episodes each. Knowing there are 48 more hours in which to tell the story, “Darlton” (as fans like to call the two men) have mapped out a plan. They know how to answer certain huge questions, when to drop the clues in there, and when they should start on the big reveal. This plan has allowed the storytelling to be smooth, it’s given us so many answers, and the new questions seem to be leading into more obvious territories than in previous seasons.

In other words, it’s starting to unveil itself like a beautifully told fairy tale, one where the writer already knows how it’s going to end and how many pages he has left in which to tell it.

If season 1 was about trying to be rescued, season 2 was about learning to live with each other on the island, and season 3 was about dealing with the native people on the island, then season 4 is about the invasion by the outside world into the microcosm of the island, and what that does to the people on it. Do the freighter people come in peace? Do they want to rescue the Losties? Or, as Ben famously says in “Through the Looking Glass,” is making contact with that ship “the beginning of the end”?