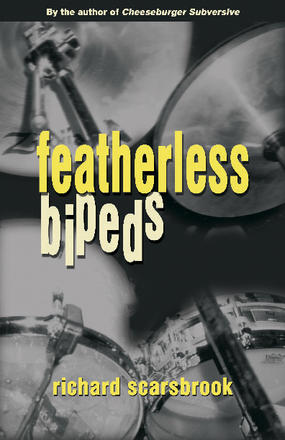 "This novel is every high school boy's wet dream: drummer Dak Sifter's adventures forming the rock and roll band Featherless Bipeds, touring, drinking beer, being discovered by the Big Plastic Record Co. and Billy VandenHammer, cutting an album and becoming famous, not to mention dealing with groupies and girlfriends. Did I mention drinking beer? Dak's decision to take a year off from university to play in a band with friends Akim and Tristan leads to new associations with serious feminist and singer, Lola, and the wealthy, annoying, incompetent Jimmy T. whose connections create the band's first gigs. Zoe, the love of Dak's life, wants time away from him to date others, but she always returns to help Dak and the band when they need it most, eventually becoming their lead singer. One year later, in a wrap-it-all-up finale, the now famous band plays once more at the bar where they debuted. Zoe and Dak become engaged, Lola is now gainfully employed with a national feminist organization, the band members' parents are present and proud (in spite of initial doubt and downright opposition to their children's choice of career), and Jimmy T and Billy VandenHammer are exposed for the crooks they are. Bernice (saved by Dak from neo-Nazi skinheads) is now the head of Artist Relations for an up and coming recording studio willing to sign the band. Dak's witty, self-deprecating style is what saves this novel from complete schlock. He tells his own story, exposing his own stupid actions with Zoe, his own cloying lyrics and his own adolescent passion for music above all else. Scarsbrook hits the nail on the head as Dak composes the simple repetitive lyrics that complement typical rock and roll. His descriptions of small, soul-destroying bars will attract those boys who think their future is there. The facts that no young people in Canada today get engaged at 19, that today's band circuit is dominated by drugs (not alcohol), that Dak's father's novel is unlikely to have come to fruition in only one year, and that band celebrity usually takes place over a matter of years (not months) will go right over the heads of the intended audience who will devour Featherless Bipeds in spite of (or because of?) its dream fulfillment. Not only does the hero do what he wants to do, he has a rocking good time doing it, becomes famous overnight (even in music terms), gets the girl and gains even his parents' approval. In between, he catches a rapist, deals with difficult (to say the least) bar audiences, jots down new songs on paper bags whenever inspiration hits, and encourages his parents to return to their creative roots to paint and write." — Joan Marshall CM

Richard Scarsbrook is the award-winning author of ten books, and his short stories and poems have been published widely in literary journals, magazines, and anthologies. Royal Blood, the first of Scarsbrook’s screenplays to be produced, won Best Short Film at the TIFF-associated Milton Film Festival in 2019, and his last novel, Rockets Versus Gravity, was a National Post bestseller. Scarsbrook currently teaches courses in creative writing at the Humber School for Writers and George Brown College. He lives in Toronto, Ontario.

A big wail-a-thon, with Akim wrenching beautiful soaring notes from his Strat, Tristan thumping up and down and all around on the bass, and even Jimmy, who has finally remembered to kick his distortion channel on, laying down some chunky rhythm guitar, only to have to switch it off again for the softer ending: the return to the simple reggae beat of the introduction: 'Even the waitress in the restaurant, where we used to go. Even the waitress in the restaurant, she wants to know.' "Damn that song kicks ass!" Jimmy T cheers. "We need to keep ol' Dak here lonely and horny so he can keep writing good shit like that!" Tristan calls out to the waitress behind the bar at the other end of the long room. "Everything sound okay back there?" The waitress flashes us a thumbs-up. "Great!" Jimmy T says, setting his guitar down. "Sound check's over. I'm getting a beer!"

Other titles by Richard Scarsbrook