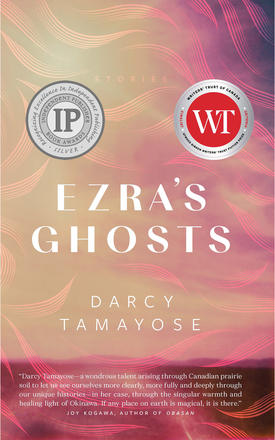 Award-winning author Darcy Tamayose returns with Ezra's Ghosts, a collection of fantastical stories linked by a complex mingling of language and culture, as well as a deep understanding of grief and what it makes of us. Within these pages a scholar writes home from the Ryukyu ... Read more

Award-winning author Darcy Tamayose returns with Ezra's Ghosts, a collection of fantastical stories linked by a complex mingling of language and culture, as well as a deep understanding of grief and what it makes of us. Within these pages a scholar writes home from the Ryukyu islands, not knowing that his hometown will soon face a deadly calamity of its own. Another seeker of truth is trapped in Ezra after her violent death, and must watch how her family--and her killer--alter in her absence. The oldest man in town, an immigrant who came to Canada to escape imperial hardships, sprouts wings, and a wounded journalist bears witness to his transformation. Finally, past and present collide as a researcher reflects on the recent skinwars that have completely altered the world's topography. Binding the stories together is an intersection of arrival and departure--in a quiet prairie town called Ezra.

Darcy Tamayose is a writer, graphic designer, and PhD student. Her work, which includes the novel, Odori, and youth fiction book, Katie Be Quiet received the Canada-Japan Literary Award, and has been shortlisted for both the Alberta Writer's Guild Georges Bugnet Award and Foreword Indie Juvenile Award. She has worked for over a decade as communications officer for the Faculty of Education at the University of Lethbridge. Born and raised in the prairie landscape of southern Alberta, Tamayose lives there today surrounded by daughter, family, and friends.

My murder happened sometime later in the evening, or rather early the next morning. It was surreal. I lay there dying with a perfect view of a bloodied haiku scroll. The poem on the vertical scroll was my father's favourite. As I mentioned, he was a consummate reader who had assembled a decent library. During my undergraduate years, in a first attempt at translation work, I'd scribbled up his Japanese copy of Oku no Hosomichi and the English version, The Narrow Road to the Deep North and Other Travel Sketches. He didn't know whether to be happy that I was showing interest or crushed that I'd completely destroyed both books -- compromised their spines, folded their delicate corners, and Coca-Cola stained the "Visit to the Kashima Shrine" travelogue bit.

Like my father, some teachers are very forgiving and light the flame for their students, and some practice a pedagogy of the oppressed. My father naturally thought he was the sole influence on my interest in Bashō, but it was actually fuelled by my fourth-grade teacher. Miss Newell had assigned a haiku. It was the first time I'd really become excited about homework, and my father's library gave easy access to resources. I channelled Bashō and wrote and rewrote that 5-7-5 pattern. I went beyond in my elementary research and ventured through zones of the city where I probably shouldn't have gone. I wove through the downtown alleys that my parents had warned me never to walk through. I took the path a local girl took when she mysteriously disappeared: from an alley that led into a section of the river bottom behind the arching cottonwoods and thick riparian where drug deals were wrangled and bodies writhed in the sockets of sexual script. In my subversive travels I discovered how the sun fell differently in these dusky-hued places.

Questions arose. Did those people who lived in tents in those bushes feel pain differently? Did they eat different food? Did they have tables to eat the food on? Did they have dishes and forks and knives to put on the tables? Why wasn't I supposed to see them? Did they speak with the same words that I did?

Words can lead you anywhere, even to places of slow, unknown passage.

My curiosity led me to the top stairs of the Ezra Mission where I was met with a Reverend Jonathan Harms. He was direct.

There was so much silence between us. He stood tall. I stood small. After the silence he agreed to one day. With pre-conditions. I was to stay on that one spot on the stoop. No wandering. No speaking to others. Amid this meditation on greys I watched, listened, drafted haiku, and pencil-sketched dusty men as they came and went. Footsteps. It altered the reverend's day as he felt a need to keep an eye out for me. He brought me hot tea and inquired often about the writing and sketches.

"Do writing and drawing go together?"

"Can they also be separate ways to speak?"

"Which comes first, writing or drawing?"

"They are sometimes together. "

"They are sometimes together. "

In the busy times -- lunch and dinner -- he came out to make public that he was keenly aware of my presence and that he served as my personal guardian. Reverend Harms even recruited a couple of his trusted regulars as assistant guardians. But guarding me from what? From the guard. One assigned man who was a shade of dust hid beneath his hat and whispered Little girl in a low grey voice so only I could hear him. Words can infect. Then when Harms came along, the dust man brightened like someone had switched on a light. They proceeded to chat gaily. Surely Reverend Harms could see through to my guard's grey-fog tatemae. But I don't think he could. Some people, I realized, even the perceived wise, cannot see through the tatemae of a wily chameleon like a child can.

For me, this was an important day of academic exploration. I discovered that natural light settles differently on some people, mostly men, who don't have food or homes. Sunlight doesn't dance and transform but pools low around the ankles for most of them. That is what my child's eyes saw, anyways. I quietly moved my pencil on the paper. Haiku after haiku. Maybe on that mission step is where I caught the wrong-men disease that my father thought I had. The wrong-men disease latched on to me and burrowed deep. Can you catch such diseases?

Praise for Ezra's Ghosts:
"[a]n immersive and intelligent page turner. ... this is a treasure. "
~Publishers Weekly
Praise for Odori:
"Tamayose's prose brims with lyrical display . .. We're offered fevid reminders of nature's beauty every few pages . .. Odori is finally a war novel, its point to seek meaning amid chaos, to show the exquisite and eternal amid the blood and brutality and death. Yet where Tamayose truly excels, where her writing seizes you (well, me) in mind and heart, is where mortal truths insist on breaking through her gauzy curtain. "
~The Globe and Mail
"Odori, Darcy Tamayose's debut novel, brings to mind initial works by such celebrated Alberta authors as Thomas Wharton (Icefields), Peter Oliva (Drowning in Darkness) and Hiromi Goto (Chorus of Mushrooms) . .. Odori is an audacious, multi-layered debut . .. Nothing would may this long-time reader of Alberta fiction happier than to see Tamayose gain a vast readership. "
~Alberta Views
"[A] sprawling, poetic and ambitious debut novel . .. Odori is fascinating . .. It's clear Tamayose has a gift for creating a sense of place. "
~The Edmonton Journal
"Has all the ingredients of a good book - suspense, drama, love, loss, the ties that bind, gifts handed down from one generation to the next and how they can be lost in war . .. The gift of the storyteller runs through Tamayose's veins and I expect to see more works in the future. I look forward to reading them. "
~The Lethbridge Herald

Other titles by Darcy Tamayose