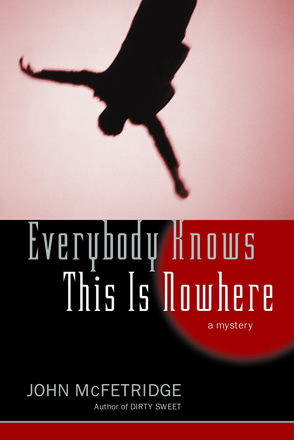 Everybody Knows This Is Nowhere

Everybody Knows This Is Nowhere

The joke? Toronto thinks it’s the centre of some multicultural universe, always bragging about how people come from every part of the world to live there.

Some of them are coming to commit crimes.

So yeah, Sharon MacDonald’s got a problem.

The joke? Toronto thinks it’s the centre of some multicultural universe, always bragging about how people come from every part of the world to live there.

Some of them are coming to commit crimes.

So yeah, Sharon MacDonald’s got a problem.

And no, it’s not being trapped in her apartment, tethered to a court-ordered tracking device. It’s not the guy who just fell 25 stories and through the roof of a car. Not the cops preventing her from getting to the grow rooms. It’s not even the mystery man who shows up with a life-saving plan that just might work.

Detective Gord Bergeron has problems too. Maybe it’s his new partner, Ojibwa native Detective Armstrong. Or maybe it’s the missing ten-year-old girl, or the unidentified torso dumped in an alley behind a motel, or what looks like corruption deep within the police force.

Bergeron and Armstrong are two of the cops poking around Sharon MacDonald’s place. They want to know whether the Arab-looking dead guy jumped, or if he was pushed. When it turns out he’s got no ID, no one knows him, and a couple of the 9/11 terrorists once lived in the building, they dig deeper, trying to make connections all over the new Toronto, in the Asian massage parlours, the street-dealer-led housing projects, and the mafia-run private clubs.

Or maybe they’ll just stay close to Sharon. She knows what everybody knows. The whole world might be coming here, but this is nowhere.