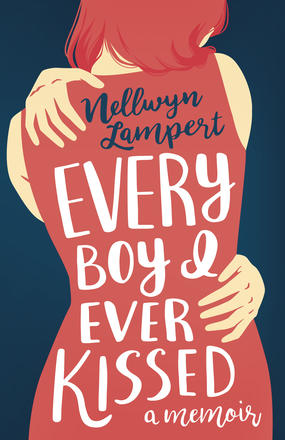 Every Boy I Ever Kissed

Every Boy I Ever Kissed

A bold step toward a new cultural narrative around sex

Sex was supposed to be easy. It was supposed to be fun, liberating, and empowering for a girl who’d been brought up thinking the battle for sexual equality had been won. But for Nellwyn Lampert, losing her virginity would ... Read more

A bold step toward a new cultural narrative around sex

Sex was supposed to be easy. It was supposed to be fun, liberating, and empowering for a girl who’d been brought up thinking the battle for sexual equality had been won. But for Nellwyn Lampert, losing her virginity would turn out to be anything but simple. Whether she was being confronted with porn-induced erectile dysfunction or other crises of masculinity, nothing went according to plan in the bedroom. Instead, Nellwyn had to learn to navigate the realities of sexual liberation, female empowerment, and masculinity all on her own.

In this coming-of-age memoir, Nellwyn looks back on her experiences with humour and insight to explore what true liberation and empowerment may look like for today’s young women. Her many unexpected adventures will prompt reflection on a bigger question: What does it mean when our experiences fail to live up to who we think we should be as liberated, postmodern women?

Nellwyn Lampert is a writer, editor, and blogger with an MFA in creative nonfiction from the University of King's College. She lives in Toronto.

It was dark, but not particularly late, on a spring evening as I followed my roommate Jess away from campus and toward unexplored avenues of urban development. If I’d been back in my hometown, this would have felt completely benign, but this was the big city and our neighbourhood had a very bad reputation.

“Just trust me,” Jess said we walked deeper into an unlit field. “What’s in the bag?” I asked, but got no reply.

At the time, the chance of us being murdered that night seemed about as likely as the chance that I would wind up an eighty-year-old virgin cat lady. Which is to say: Very Likely.

I followed Jess to where the field ended on the edge of a con- struction site. We stopped on a precipice and looked out over a deep cavernous gorge where back-hoes and dump trucks slum- bered. My friend reached into her bag and pulled out a stack of white dinner plates.

“I think you need this,” she said, handing me an orange Sharpie. “You’re going to write everything that’s bothering you on these plates and then we’re going to smash them!”

I took the Sharpie and cramped my handwriting in tiny letters across the porcelain plates, worried I would run out of room. I wrote about every boy I’d ever kissed and every ridiculous, unexpected, and shocking moment that had brought me to the edge of that cliff.

Ethan lies crying in the gutter at three in the morning, the back of his coat wet with rainwater that hasn’t yet made its way to the sewer. His phone keeps ringing in my purse, but I know what his brother’s voice would say on the other end. “It’s okay,” I keep saying. “Just get up and we’ll go home. We’ll break up and you’ll meet a nice guy; you just have to get out of the street first. ” I want to scream, I want to cry, I want to drag him up by his collar and force his feet to walk, but I can’t. I must be patient, patient, and more patient.
***
Something isn’t right. Something always goes wrong. It’s too dark to see, but I can feel the space between our naked bodies getting wider and wider until Ben is beside me instead of above. I hear his voice rise up out of the darkness and I know, both instinctively and from experience, that it will shake with the timbre of an identity crisis. “I think I have a pornography addiction. ”
***
In the moonlight from the window, I can see Dave’s face above mine as I lie back in my bed and take off my clothes. His strong jaw, his mas- culine nose. His eyes full of tears. I’m not surprised this time; I know what comes next. The whispered confession of a brand-new secret, the warm, sinking feeling of taking a young man’s body deep into my arms, the gentle stroking of his hair and the assurance that, as always, “It’s okay. It will be okay. ”
***

I am the girl who will take your secrets deep inside her vodka- soaked heart at two or three in the morning and in the bright light of the next day, I know I will never see you again. I will turn on the water in the shower so hot that my skin flushes red all over and I will cry where I can’t be heard. I will get back into bed and roll the blankets and pillows up against my back so it feels almost as if there is someone lying there beside me, holding me in his arms. I can almost feel his slow, quiet breath against my neck even though I can only imagine the feeling. I wonder how it’s possible to miss something I’ve never had.

Standing on the edge of that construction site, I smash every single plate. One by one.

It would be a cop-out to say I spent the first quarter of my life desperately chasing love because my parents divorced when I was little. And it makes me cringe to write that, for years, I wanted a boyfriend more than anything else. But, to be honest, aren’t we all looking for love?

Let’s face it: as early as I can remember, I wanted to be done with dating. Done with boys and bars and checking my messages every three minutes to see if he’d texted.

At five years old, I put on my mother’s white silk slip, long enough to touch my ankles, and hung a piece of white tulle off my short curly hair. Then I grew up and realized I’m a feminist. A girl- power enthusiast lucky enough to have been born in 1990. I’m not sure I would have known enough to use a word like “feminism” at a young age, but nothing helps you understand female empowerment quite like growing up with a single mother. By my teen years, it no longer seemed appropriate to admit, even to myself, that being someone’s girlfriend was one of my most cherished goals.

Luckily for me, it was a goal that appeared easy enough to accomplish naturally, in time, without requiring too much effort on my part.

Growing up, I took it for granted that I would get good grades, go to university, and probably break a few hearts. Those were inevitable truths, because they came from the lips of adults, and because history dictated I should follow in my mother’s footsteps.

My mother is beautiful. Right down to her core. She appears to leap out of photographs, tall and slim, with miles of raven-black hair and piercing blue eyes. In one family photo from the 1970s, my young mother sits with one leg draped casually over the other. With an unnatural confidence for a teenager, she looks like she belongs in the pages of Vogue Paris, not in the rec room of a suburban Toronto home.

I didn’t look anything like my mother growing up, but I listened to her stories about learning to drive with her high school boyfriend and singing backup for her first husband back when all he played were small nightclubs in Europe, and I believed something similar would one day happen for me. All I had to do was figure out how to be beautiful. Inside and out.

For the first twenty-one years of my life, I pursued love and beauty as aggressively as I pursued academic excellence and some kind of undefined creative career. Like many young women, I had somehow gotten the message that intelligence, independence, creativity, physical attractiveness, and a willingness to run with the boys would inevitably lead to the fun privileges of sex and, eventually, to the ultimate goal: love. Finding a boyfriend, having sex, falling in love … it was all supposed to be simple.

Until that evening, looking out over the construction site with a stack of plates in my hand, when I realized I’d been lied to. Every adult woman I knew, every magazine I’d read, even feminism itself had told me, in one way or another, that having sex was easy. Even too easy.

Everywhere I turn, I run into a baby boomer parent wringing her hands in shock and fear over hookup culture and phone apps that let you order a date like you order takeout. I remember all too well the shame of being a twenty-one-year-old virgin in a world that seems to value sexual savvy above all else.

Years later, I realized I wasn’t alone. Millennials, the alleged trailblazers of the hookup generation, are actually having way less sex than most people think. In fact, as a group, we boast over 50 percent more virgins in the twenty-to-twenty-four age bracket than our hand-wringing boomer parents did when they were that age. So, what gives?

As I watched those plates shatter on the concrete below me, I tried to figure out where exactly I’d gone wrong. I thought I had followed the social script perfectly. The trouble was that I had been prepared for a world that didn’t exist. Everything I had been taught about sex and dating was a myth. And, as a bonus, I discovered I was woefully unprepared for reality.

As I fought my way ever more aggressively toward love — and sex — I slowly discovered all the little lies our generation has been told. The good news is, when you uncover a lie, you also uncover the truth.

Nellwyn Lampert’s Every Boy I Ever Kissed is a delicious mix of poignant stories, girlfriend secrets and bedroom philosophy, spun with the author’s sly wit and astute cultural insights. Who am I? Where do I fit in? are questions we all ask, but if you’re a young woman navigating conflicting messages about identity, feminism and sexual mores, the questions can be thorny. Nellwyn Lampert’s coming of age memoir is wise and wonderfully engaging.