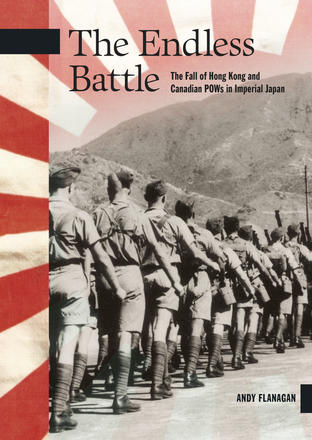 Near the end of October 1941, a few hundred soldiers from New Brunswick were among the 1,975 Canadian troops who set sail from Vancouver ... Read more

Near the end of October 1941, a few hundred soldiers from New Brunswick were among the 1,975 Canadian troops who set sail from Vancouver to reinforce the British Colony of Hong Kong. Within two short months, after a hard-fought but disastrous battle against the Imperial Japanese Army, the island fell to the invaders on Christmas Day, and its defenders were ordered to surrender by the governor of Hong Kong. The survivors were taken captive.

Based on the first-hand accounts of the author's father, Andrew "Ando" Flanagan, a rifleman from Jacquet River, NB, The Endless Battle explores the Battle of Hong Kong and its long aftermath, through the eyes of the soldiers. During their captivity, the POWs endured starvation, forced labour, and brutal beatings. They lived in deplorable conditions and many died from illness. But the soldiers stuck together, bound by their cameraderie, loyalty to King and Country, and collective desire to sabotage the Japanese war effort.

Writing intimately and sensitively about the lingering effects of the trauma of the soldiers held in captivity, Andy Flanagan shows both the heroism of individual soldiers and the terrible costs of war.

The Endless Battle is volume 24 in the New Brunswick Military Heritage Series.

Andy Flanagan was born in Belledune, NB. His writing has appeared in the Northern Light, the Ottawa Citizen, and on CBC.ca.

"It is hard to believe one might maintain hope in a prisoner-of-war camp located thousands of miles from home, especially as health declines and the pages of the calendar turn with no end in sight. But it is courage, hope and resilience that shine through in The Endless Battle: The Fall of Hong Kong and Canadian POWs in Imperial Japan. "

"An intriguing mix of military, social and family history that is well worth the read. "

"One can easily see why this well-written book was shortlisted for the Democracy 250 Atlantic Book Award for Historical Writing and suggested reading by the Hong Kong Veterans Commemorative Association. "

"An unadorned, true portrait of a hero. "