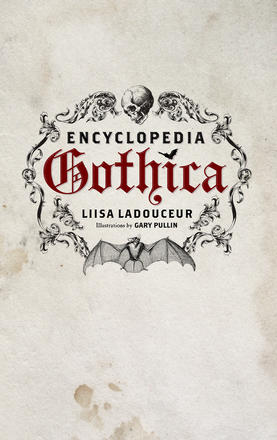 Encyclopedia Gothica is a guide through that shadowiest of subcultures: modern Goths. It collects and defines more than 600 words and phrases used by these children of the night so that you too can engage in conversations about deathhawks and rivetheads and who is more u¨bergoth: ... Read more

Encyclopedia Gothica is a guide through that shadowiest of subcultures: modern Goths. It collects and defines more than 600 words and phrases used by these children of the night so that you too can engage in conversations about deathhawks and rivetheads and who is more u¨bergoth: Bela Lugosi or Robert Smith.

Compiled by acclaimed Goth journalist and poet Liisa Ladouceur, it gives readers insight into the unique vernacular of this fascinating community, describing in detail and with black humour the fashion, music, and lifestyle as well as sharing insider slang such as Baby Bat, Corp Goth and the Gothic Two-Step, and the first ever Goth Band Family Tree. From absinthe to zombies, it’s the Encyclopedia Gothica!

Liisa Ladouceur is a lifelong vampire lover and journalist who covers horror and the dark side of culture for publications including Rue Morgue magazine. She is the author of Encyclopedia Gothica (2011) and lives in Toronto with a black cat.

It’s no wonder that the G-word perplexes both insiders and on-lookers alike. This one hard-working four-letter word has been asked to define so many things: music, fashion, architecture, typefaces, literature, cinema, a Germanic tribal horde and, for about 30 years now, the kind of people prone to hanging out in graveyards sipping red wine and pretending it’s blood while reading Shelley aloud and contemplating the bleakness of existence (and/or holing up in their bedrooms with Joy Division records). At least that’s who one might think a Goth person is by the way we are most often portrayed in news reports and the kind of articles that pop up around Halloween or whenever a teenager wearing a black T-shirt shoots someone.

I say “we“ here because I am, unabashedly, Goth.

I wasn’t born that way, a daughter of darkness. But it didn’t take much. In fact it took exactly 4 minutes and 20 seconds of television. MuchMusic, then the Nation’s Music Station in Canada, had just come to my area and, being obsessed with popular music, I watched every day after school. And on one afternoon in the late 1980s Much played “She Sells Sanctuary“ by a British band I didn’t know, The Cult. Like most videos of the era, it was a simple performance clip, the band lip-synching and fake-playing in a studio – in this case one bathed in psychedelic coloured lights. It’s not, viewed today, particularly Goth. (Singer Ian Astbury is dressed like a hippie and guitarist Billy Duffy has short white blond hair, to start. ) But its opening moments – a red curtain parts to reveal a shadowy, Shaman-type figure all in black slowly swirling his hands around in a fog – hypnotized me like nothing I’d seen before. And the song itself – with its incessant drumbeat, intoxicating echoey guitar riffs and infectiously simple, haunting refrain about the world dragging us down was my first exposure to something that bombastically melodramatic. I knew melancholy from poetry, but this was ache you could dance to. For me, being exposed to “She Sells Sanctuary“ was like getting a blood transfusion: I woke up afterwards and my insides were completely different. I had a totally new pulse.

After The Cult came The Cure. And Love and Rockets and Bauhaus and The Sisters of Mercy and Siouxsie and everything else I could get my hands on in a small town, pre-internet. A random photo of three scary looking guys in a free magazine turned me on to Skinny Puppy, and from them came the discovery of industrial music. By this point, I had moved to Toronto, knew the word “Goth,“ and was well on my way to exploring everything that meant. Ultimately, I started publishing my own fanzine (The Ninth Wave, named after an album side by Kate Bush) and guest co-hosting a campus radio show, Beyond the Gates of Hell, with the Gothiest boy in town. It was about this time that I started being asked, “What is Goth?“ A lot. Especially by the media.

On many occasions I primped for evening news cameras or wayward reporters and tried my best to explain what the hell all this was. I would declare how we are not (all) suicidal or satanic, speak haughtily of a love for poetry and philosophy and beauty and romance, trying my best to convey, in a way that just might make it into the inevitably truncated soundbite, just what is Goth.

I was, of course, doomed.

Since it first crawled out of the clubs of England and America in the death throes of the 1970s, the subculture we’ve come to call Goth has been difficult to explain. At the start, these denizens of the night were known as batcavers or death rockers, the music was generally considered part of post-punk and the clothes were simply … black. Mystery lingers over who first appropriated the word “Goth“ to describe this new kind of young freak; my beloved Ian Astbury (one of those Goth icons who insists he’s not Goth at all) is just one who has staked his claim to it.

By the mid-1980s, the G-word was well established, and a collective consciousness evolved around the term. Gothic rock was a legit musical genre. There were Goth-specific shops, Goth magazines and Goth festivals. Goth was now a somewhat recognizable thing, a world of Victorian- or Medieval-inspired sense and sensibilities co-mingling with punk rock and S&M attitude and fashion. And the diverse crew of anarchists, art school brats and horror movie fans who had started it seemed to have been distilled into a fairly homogenous bunch – one quite easy to identify. Or so we thought. Thanks to explosion of the internet in the mid-1990s these people – many of them misfits in small towns around the globe – started to find each other in great numbers. And as they chatted amongst themselves, they discovered that as much as they were all drawn to what had come to be known as Goth, they weren’t necessarily alike. A popular question became, “Is [this thing I like/hate] Goth?“ Because, like any good species seeking immortality, the subculture was mutating, drawing upon new influences such as cyberpunk, rave culture and anime and finding new ways of expressing a devotion to the dark side beyond black eyeliner and backcombed hair. The different factions named themselves: rivetheads, Cybergoths, Romantigoths, etc. Each new wave brought their own codes of conduct and methods of communication. For the one thing these sub-groups had in common was that each sought to distinguish itself from the others, and from youth culture trends at large. And so, Goths reevaluated what the G-word meant, twisting it into new variations to suit the bewildering number of subgenres and sub-subgenres, so much so that terms such as Trad Goth emerged to distinguish the oldschool original folk from the new.

“Ladouceur’s humour is a welcome rarity in an oft-misunderstood subculture. ” — Maclean’s

“A thorough and amusing encyclopedia about all-things-Goth. ” — AntiMusic

“Seriously smart without taking itself too seriously. ” — NOW Magazine

Other titles by Liisa Ladouceur