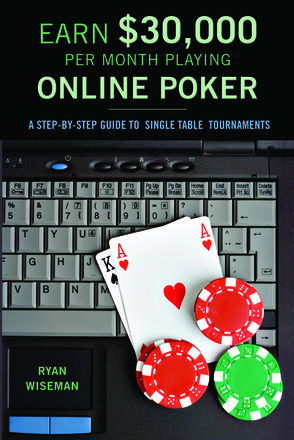 This book is the only poker book available ... Read more

This book is the only poker book available that caters specifically to online sit-n-go (SNG) single-table low-limit Texas Hold’em tournaments. More importantly, it is the only poker book that guides the reader on a progressive path upward through the various limits, with only the information necessary to win with any bankroll or skill level to beat that specific low limit. Presented in a series of steps, the book provides guidelines that help tell the reader when to move up to a higher limit.

SNG’s have very predictable durations (40 – 60 minutes) so the reader could effectively set aside blocks of time to play. Unlike other games, the book contends that SNG’s have very predictable win/loss rates, can be defeated systematically, and offer an innate system of progression. That is, the various buy-in amounts can be viewed as a climbable ladder that helps gauge success.

As with any gambling, winning is not a sure thing. But this book gives you the tools you need to win.

Ryan Wiseman began playing online poker while a university student in 2003. Within a year, having studied many poker books with his poker-playing friends, he had become successful. Eventually they settled on one type of game — the no-limit Texas Hold’em sit-n-go (single table) tournament. The game’s predictable durations (40–60 minutes) fit well into their daily routines. More importantly, SNG could be defeated systematically. By the middle of 2005, Ryan had won more than $100,000. He currently lives in Toronto.

Much like a pilot need not know the pure physics behind a flight, a skilled poker player need not know the pure mathematics behind winning poker play. Too often poker books have taken a purely theoretical approach to poker instruction. They present the reader with a flood of mathematical proofs, complex scenarios, and tiresome examples — all of which overwhelm the beginner. Indeed, we were once overwhelmed by these books, confused over how anyone could absorb the knowledge therein without a PhD in statistical analysis. How could one person possibly retain, then efficiently apply, all of the information in these books without months of study? Where was the step-by-step approach to defeating online poker?

We began playing online poker in 2003. We were full-time university students and part-time fish. There is no denying the fact that we were all losing players back then. We went online to gamble, and it showed. It was only a matter of time before one of us stood up and said, “I don’t want to lose anymore. ” So he read a few books, found them confusing, but studied hard. By 2004, he was no longer a losing player. In fact, he was a consistent winner. That year he forfeited summer employment to play poker full time, and by the start of the next academic year he was earning significantly more than the rest of us. What was our response? Teach us!

Over the next few months, we observed our friend constantly. The learning process quickly became addictive as each day took us closer to financial freedom. Our friend had read seven poker books that summer. Over 2,500 pages of tedious, technical reading. He said that, for every 50 pages he’d read, only one had contributed to his success. He had photocopied the key pages and kept them in a stapled pile next to his computer — 2,500 pages condensed to a 50-page reference package.

By the end of 2004, we were all winning players. All of us contributed to each other’s success, feeding off the combined body of experiential knowledge we had collectively acquired. We played at over 30 different online poker sites, at every limit available (at the time). Eventually, however, we all settled on one type of game: the no-limit Texas Hold’em sit-’n’-go (single table) tournament.

Initially, we chose to specialize in the no-limit sit-’n’-go (or NL-SNG) tournaments because it helped to structure our playing time. As students, we needed to be able to walk away from poker at specific times. SNGs have very predictable durations (40–60 minutes), so we could effectively set aside blocks of time to play. However, it quickly became apparent that they offered further advantages. Unlike other games, SNGs had very predictable win/loss rates, could be defeated systematically, and offered an innate system of progression. That is, the various buy-in amounts can be viewed as a ladder that helps us to gauge our success.

Just six months into 2005, we had each earned in excess of $100,000 U. S., and only one of us actually understood the math behind our winning play. The rest of us? Well, we were more than content in our ignorance.

Invariably, other friends became curious about our success. They wanted to know how they could replicate our earnings. While the method we were using was extremely straightforward, we simply did not have the time to teach each person individually. They asked if there was a specific book they should read. The answer was always no, though we wished there was! Eventually, one of us wrote a brief paper explaining how to defeat the low-limit SNGs at PartyPoker. It provided the reader with only the information required to beat that specific low-limit. We gave it to someone every time they asked for poker lessons, and everyone seemed to succeed. It was then that we had our epiphany: we could write a step-by-step guide to defeating SNGs. A book that provides the reader with information on a need-to-know basis. A book that can show a beginner how to turn a very small initial investment into hundreds of thousands of dollars. A book based on experience. This is the result of that epiphany.