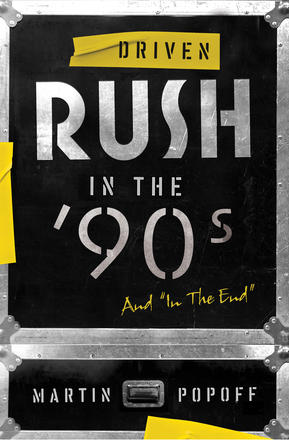 In this conclusion to his trilogy of authoritative books on Canada’s most beloved and successful rock band, Martin Popoff takes us through three decades of “life at the top” for Rush’s Geddy Lee, Alex Lifeson, and Neil Peart. Though this era begins with the brisk-selling Roll the Bones and sees throngs of fans sell out international tours, there is also unimaginable tragedy, with Peart losing his daughter and his wife within the space of ten months and, two decades later, succumbing to cancer himself. In between, however, there is a gorgeous and heartbreaking album of reflection and bereavement, as well as a triumphant trip to Brazil, a Rock and Roll Hall of Fame induction, and — some say surprisingly — the band’s first full-blown concept album to close an immense career marked by integrity and idealism.

“Popoff’s longtime access to the three band members, Geddy Lee, Alex Lifeson, and Neil Peart, and their associates continues to provide a phenomenal treasure trove of insight and detail … Popoff is to be congratulated for this herculean effort. ” — Library Journal

“Endings are so often sad occasions, and so it is with Martin Popoff’s Driven. It’s not that he ends the story on a somber note, but rather his wonderfully detailed history of Rush closes out the story of a band that has meant so much to its fans (myself included). ” — Py Korry blog