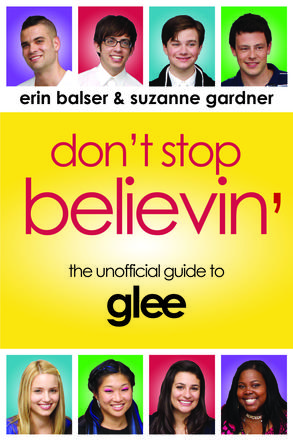 The kids in McKinley High School’s glee club, New Directions, might not be the most popular, but for six years Glee was unquestionably a runaway hit. During its spectacular run from 2009–2015, ... Read more

The kids in McKinley High School’s glee club, New Directions, might not be the most popular, but for six years Glee was unquestionably a runaway hit. During its spectacular run from 2009–2015, Glee exploded as one of the most popular hours on TV, and earned an astounding 19 Emmy nominations in its first season. In addition to the show’s staggering success, Glee’s songs heated up the music charts, with 25 tracks on the 2009 hot 100 list, a hit-rate topped only by the Beatles when they had 31 hits in 1964.

Don’t Stop Believin’ pays tribute to the glorious mash-up of music, comedy, drama and social commentary that keeps Glee and its band of misfits in the spotlight, even after the final curtain fell on the show. Written by gleeks extraordinaire Erin Balser and Suzanne Gardner, the book is jam-packed with:

Capturing all the highs and lows of this ground-breaking series, Don’t Stop Believin’ is a show-stopping guide to Glee’s journey — the perfect companion for fans who need an encore of the show.

“Erin Balser and Suzanne Gardner’s Don’t Stop Believin’: The Unofficial Guide to Glee is the ultimate resource for truly dedicated fans. The authors’ unabashed enthusiasm and total immersion in the \"huge, complicated and fascinating world\" of Glee is apparent throughout this highly readable companion volume. . . . The authors present a treasure trove of facts and trivia, while keeping the tone accessible and chatty. Gleeks will want this volume by their side as they watch—or re-watch—episodes and delight in each and every detail of the show. ” — School Library Journal

“Don’t Stop Believin’ in my mind was pretty perfect when it comes to giving all the dish and facts on Glee. . . . If you are a fan of Glee, hands down this Glee guide is for you!” — Pop Culture Junkie

“Whether you're a super Gleek or you’ve only seen a few episodes of the show, Don’t Stop Believin’ is a book you’ll cherish for a very long time. . . . I truly cannot recommend this book enough and I give major props to Erin and Suzie for writing such an amazing companion guide. ” — Being @RACHELBERRYWMHS

“This book is full of new facts that even avid Glee fans will find interesting. ” — Calgary Herald

Other titles by Erin Balser

Other titles by Suzanne Gardner