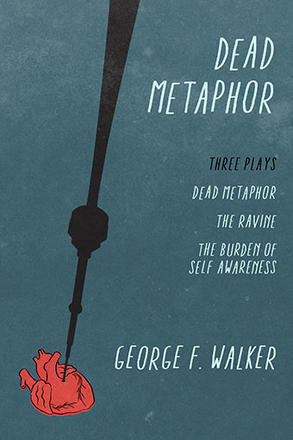 Canada’s top playwright sears the page with three new darkly comic plays that denounce political culture, individualism, and the accompanying moral depravity. The title play, Dead Metaphor, examines the collision of a politician’s personal and professional lives, complicated by a son’s return from Afghanistan. In The Ravine, a mayoral candidate learns that his ex-wife is living in a gully nearby and wants to put a hit on him. The Burden of Self-Awareness has money at the centre of a dramatic conflict of values. Each of the three plays is populated by characters trying to navigate the increasingly blurred lines of what’s right and wrong – trying to always stay informed, alert, and ready to act for the common good. Or just to get even.

George F. Walker is one of Canada’s most prolific and widely produced playwrights. His work has been honoured with eight Chalmers Awards and five Dora Awards. His plays Criminals in Love and Nothing Sacred each won Governor General’s Awards for Drama. Productions of Nothing Sacred (1988) and Love and Anger (1990) have met with great success in the United States in New York, Los Angeles, Seattle, San Francisco and Chicago. Zastrozzi has had over 100 productions in the English-speaking world. Problem Child, included in the anthology Suburban Motel (1998), won a Chalmers Award for Best New Play. Two packaged collections of Walker’s work were published in 1998: Somewhere Else (1998) and The East End Plays: Part Two (1998).

In 1999, Talonbooks released The East End Plays: Part One (which includes Criminals in Love, the Chalmer’s Award-winning Better Living, and Escape from Happiness) and The Power Plays (a collection containing Gossip, Filthy Rich, and The Art of War).

Many of Walker’s plays have been translated into German, French, Hebrew, Turkish, Polish and Czech. He has spent the past several years writing for television including CBS’s Due South and CBC’s The Newsroom.

PRAISE FOR DEAD METAPHOR
“funny, disturbing and highly reflective of our drastically divided post-Sept. 11 political climate. The playwright, a master of the theatrical twist, turns conventional wisdom on its head”
– Finger Lakes Times

DEAD METAPHOR
"It takes a unique laugh out loud funny narrative to assess the increasingly blurred lines of what’s right and wrong. Dead Metaphor ’s tenacious sociopolitical context does more than target the mad, mad world we read about in the daily newspapers, it offers a brilliant satirical refuge in which to take cover. ”
– TorontoStage. com

“Don’t be surprised that the name of George F. Walker is credited as author and director . .. Dead Metaphor is as heedlessly tasteless and free-swinging an entertainment as you’d expect from the man who juggles the double crown of Canada’s angriest and funniest playwright, but it also has a profound moral centre that will leave you thinking long after you leave the theatre. ”
– Toronto Star
THE RAVINE
“Walker is talking about how power corrupts, what people will do to get it and how only the pure of heart and offbeat of mind can ever set things right. It’s vintage Walker: funny, violent, compassionate and thought-provoking. ”
– Toronto Star

“an important play … there is plenty of raunchy humor (with the emphasis on raunchy, so be prepared), and even a kernel or two of truth, which are more than enough to make your experience worthwhile … while you’ll laugh all night, you might also squirm a little from time to time. I highly recommend the experience. ”
– Finger Lakes Times