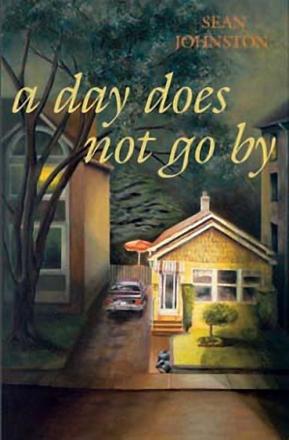 Day Does Not Go By, A

Day Does Not Go By, A

Johnston skillfully follows the twentieth-century realist tradition of stripping stories down to details and everyday conversations that represent accurate snippets of life, and he explores perception - our ability to discern between conclusions and reality, between misplaced ... Read more

Johnston skillfully follows the twentieth-century realist tradition of stripping stories down to details and everyday conversations that represent accurate snippets of life, and he explores perception - our ability to discern between conclusions and reality, between misplaced trust and mirror-pane truth. In his unique stories, Jeff and Beth clumsily discuss how they should be reacting to finding a "dead man," who is not actually dead; a married couple doubt the existence of their eight-year-old son enough to add their names to a school petition asking "teachers and students to no longer refer to the boy. .. except as a myth. "

Johnston masterfully mixes such stories and perspectives with short vignettes told directly from ground zero of a surreal, apparitional landscape. Without philosophical discourse or interrogation, these stories playfully prompt us to question our own realities. The debut of one of western Canada's most thoughtful and original new authors, A Day Does Not Go By realistically depicts the confusion brought about by crumbling or extinguished relationships, roles and identities.

Sean Johnston is the author of The Ditch Was Lit Like This (Thistledown, 2011), All This Town Remembers (Gaspereau, 2006) and A Day Does Not Go By (Nightwood, 2002), which won the 2003 ReLit Award for short fiction. He lives in Kelowna, BC, where he co-edits Ryga: A Journal of Provocations and teaches at Okanagan College.

The mother wondered out loud all day long if you weren't all going to hell. No, you would say, to the first question of the morning. You could take lessons in this house. Intricate rules abused the rough men and kept them right.
Her movement and worry could heat the kitchen on its own. Stop moving, you would say on holidays, or during a day of heavy rain in the summer. Save yourself the trouble, just this once. She sighed and the idea itself renewed her.

You heard of wars, and other things. It's terrible, she said. You knew it was. Some day, everything will change, she said, and those that keep their mouths shut will babble with such fierce power the ones that couldn't shut up will have no choice. They that are fattened and gorged on money from blood will be sickened while the starved finally swallow their own pure hearts and grow to astounding heights. And the blind will see.

She couldn't read, so she made up her own stories. She knew there would come a day.

You took a chance doing the wrong thing there. You walk in one night real quiet and that illiterate old woman is up in the light of the stove right away saying you've got liquor on your breath. You stink. But maybe you'll get some sleep, you say.

You can't swing at her but you want to. She turns shaking her head, crying, what the bottle done to your uncle.

Next morning, before she asks, you know you're going to hell.

Look, none of this is going to happen, she says, without a gesture. You are not even listening.

Cripes, we're all tired, someone says. A young one, mind you, a grandson. He's the one who finally taught her to read. She wrote a long letter to you. You were gone then, but came back for the funeral.

It's not that I'm not dead, she says. I'm not arguing that. I feel okay though. This is fine. In the ground would be too much.

The women and the men in the tiny kitchen hold napkins of food and mutter how heavy the coffin was. She walks around oblivious over the pearly floor and smiling at the young ones. You can't catch her eye.

She doesn't see the bottle on the table. The rum in her kitchen doesn't make sense and maybe that's why no one talks to you. Sometimes your wife.

The people smiling are all good. The things they say you can't hear, but the people are all good. The one your brother married is sick but looks strong. Your sister is still hurt by the accident though she can walk fine. Your boy is stronger than you ever were.
The old woman will never look at you again. She sits writing at the table across and cannot see you. You may be thin air, fine, but she doesn't even hear the sound of glass when you almost drop the bottle pouring.

You can't read upside down. My oldest boy, she says, wanting to fight the hired man after his father died.

You were twelve that time and the man was across the yard. Before the old man died he told you look out for your mother and the simple math of it never made sense. The slow-moving big man died and the slight quick woman had too great a portion to bear.

The man wasn't asking much and neither was your mother. Nobody is ever asking much, but you heard her loud through the sun and the dust and it was enough. That's the time she rescued you.

She looks at you now and may speak.

You know she's not there. Your wife is beside you with her hand on your back. It's been too long, she smiles, to your brother in his worried old suit. He nods above his short fat tie and everyone smiles.

Come out tomorrow, you say. There are things to sort out.

Across the room your boy is sick of smiling. Don't say anything, you think. Don't joke about the coffin and don't tell the boy it gets better and don't touch a thing in this house.

Where many short story collections suggest a scraping together of mismatched bits and pieces, Sean Johnston's collection (winner of New Brunswick's David Adams Richard Award for emerging fiction) has the rare virtue of uniformity in style and theme. In this, it resembles such early classics as Joyce's The Dubliners, and Hemingway's In Our Time.
--Joan Givner, The Malahat Review

It's as if Johnston has sat inside his characters' heads and took notes about their memories, their lusts and their random thoughts . .. His observations and perceptions of human relationships are brilliant and frank, and lend to the endearing quality of his stories . .. Bravo to Johnston for such a concise and honest portrayal of human condition, desire and reaction.
--Radha Fisher, The Nexus Camosun College Newspaper, November 12, 2002

... reminiscent of Hemingway . .. The characters in these stories are often bewildered by circumstance and try to grasp onto such concepts as duty and routine as one would a life preserver. I found many of the details in these stories to be heart-breaking . .. As in the magic realism of "We Can't Go On Like This," in which a baby is born out of an automatic bank teller, nothing in any of these stories is ever quite familiar, but the experience of reading them alters our perception and challenges our preconceptions. This is a talented writer.
--Richard Cumyn, judge's statement for the David Adams Richards Award

Sean Johnston has an original approach to the short story genre . .. Literature, like all other creative endeavours, evolves and grows and (one hopes) progresses, and the short story has come a long way from the days of de Maupassant and Somerset Maugham, whose stories, whether comic or tragic, were like polished mirrors held up to life. In Johnston's stories, the mirror has shattered, and you pick up the fragments carefully, at risk of cutting yourself in the process.
--David Rozniatowski, Prairie Fire

Sean Johnston's words are deceptive, moving two different speeds at once. The voice in your ear seems laconic and lowgear, but possesses a seething momentum -- look up and you've traveled light years. Perception and venom and compassion and mood swings -- clearly Mr. Johnston has bitten the head off a few weasels in his day.
--Mark Anthony Jarman, author of 19 Knives and Ireland's Eye

Clean, quick and refreshingly free of the pseudo-philosophical cant that clogs the arteries and ultimately does in so much supposed serious Canadian literature, the stories in A Day Does Not Go By are best at what they aren't: pretentious, over-written or boring.
--Ray Robertson, Toronto Star, November 10, 2002

In A Day Does Not Go By, Sean Johnston arranges his themes -- the fear of betrayal, the fragility of love, the haplessness of old age, the inadequacy of language -- into 27 short vignettes . .. The best stories in A Day Does Not Go By are deceptively complex. Johnston uses a minimalist prose style to depict sometimes-unremarkable happenings that are then transformed into resonant meanings. Shards of intimacy, despair, compassion, and brutality emerge via this uncanny banality.
--Karen Luscombe, Quill & Quire

In his debut collection, A Day Does Not Go By, Sean Johnston at first glance deploys the kind of affectless and apparently artless prose made famous by Raymond Carver (in a direct line of descent from Ernest Hemingway) and badly imitated ever since . .. Johnston's writing, by contrast, manages to suggest that invisible deeper knowledge and thus draw us into the [existences] of ordinary people who live often marginal, struggling lives . .. Johnston's characters are able to locate their feelings in a way that's beyond the numbness of Carver's . .. A Day Does Not Go By won the David Adams Richards Award for Fiction last year and [won the ReLit Award for Short Fiction] -- a sign that Johnston's quiet prose is getting deserved notice.
--Patricia Robertson, Books in Canada

A Day Does Not Go By features stories that transform ordinary, quotidian life into something uncanny, mysterious, and moving. This is a promising debut by a writer to watch.
--Guy Vanderhaeghe

Other titles by Sean Johnston