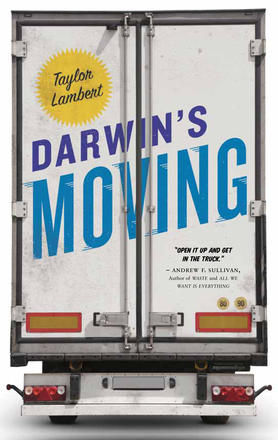 In a city known for wealth and prosperity, the divide between haves and have-nots is rarely clearer than on moving day, when those two worlds come together in intimate fashion. Violent ex-cons and drug addicts are invited into spacious homes, entrusted with the care and transport ... Read more

In a city known for wealth and prosperity, the divide between haves and have-nots is rarely clearer than on moving day, when those two worlds come together in intimate fashion. Violent ex-cons and drug addicts are invited into spacious homes, entrusted with the care and transport of the possessions of the upper classes -- a unique bridging of two normally segregated worlds.

Darwin's Moving is an intriguing and affecting exploration of class divides by a journalist and former mover. Taylor Lambert takes us behind the scenes of a familiar industry that is almost completely undocumented in Canadian literature to reveal the cycles of poverty and addiction that ensnare its workers. This is the Other Calgary, a world populated by transient men and women struggling to survive in a boomtown's shadow.

Taylor Lambert was born in Regina, Saskatchewan and eventually settled in Calgary, Alberta. He is a journalist who has published three previous books, including Leaving Moose Jaw and the Calgary bestseller Rising: Stories of the 2013 Alberta Flood. To pay for tuition and later to offset his freelance writing, Taylor worked moving furniture, which led to the idea to write a book centred on the moving industry: Darwin's Moving. Taylor currently resides in Calgary.

For more information on Taylor Lambert and his books, please visit taylorlambert.ca.

The trucks are running and ready to go, tidy and loaded with the necessary equipment and supplies. Darwin hands me the paperwork and says that it's me, Jesse and Keith working together. He's on another move with Ricky. He knows nothing about our job other than it is going from Crestmont to Springbank. Big, small, challenging, straightforward--anything could await us. We never really know.

It's the first time I've seen Jesse since he blew up Nazi Bill. Apparently bored at home one day the previous week, Jesse started burning things other than wood in his backyard fire pit. This escalated to aerosol cans and propane tanks. These he threw into the fire before running indoors and filming the result from a window. Bill unwittingly and unfortunately entered the scene just as the explosion occurred, suffering second-degree burns on his face and hands. Jesse pulls out his phone to show Ricky and I the footage. On the small screen of his flip phone little is discernible except the explosion and someone yelling, "What are you doing?!"

Jesse declares that he is driving, which is fine by me. Driving is, for Jesse, a way to be in charge, and to avoid the boredom that comes to him so easily. Keith, the smallest of us, sits in the middle of the blue truck's bench seat, trying to keep his legs to the side of the stick shift extending from the floor in front of him.

From the Foothills industrial district we take Glenmore to Sarcee and then the Trans-Canada to Canada Olympic Park, or more precisely the McDonald's across from it, where we stop so Keith and Jesse can get breakfast. I stand outside the truck in the cold morning air looking at the ski jumps until they return with sandwiches and coffees and cigarettes and we get back on the highway for the short drive to Crestmont.

Our customer arrives at the house at the same time we do, which is fortunate because the pit stop has made us half an hour late. Shelley is in her early thirties. She is pleasant but clearly stressed. We introduce ourselves and ask her to give us a walk-through of the house. Just off the entryway is a large aquarium full of water and fish. "You guys take these, right?" asks Shelley.

"We don't normally take them when they're full," says Jesse.

He's being kind. Who on earth would think it sensible to take forty gallons of water and living things enclosed in glass on a moving truck? Shelley looks worried. "I didn't bring anything to put them in," she says. We suggest a bucket, or plastic baggies. For a long moment she looks lost. Then she snaps out of it. "Okay, I'll deal with that," and we continue the tour.

There are no boxes, not a one. Shelley and her husband Dan have already moved everything they could to the new house. All that remains is furniture. The house is two storeys plus a basement, just under three thousand square feet. In the basement there is a sectional, an overstuffed chair, a wood armoire, and a long wooden table with a heavy marble top. On the main floor there is a kitchen table with chairs, couches and bookshelves, a TV stand (but the TV stays), and two buffets. Upstairs are the master bedroom and the rooms of their two young daughters, as well as a large office. Aside from the usual bookcases and desks and beds, there are two items of note. One is a large glass terrarium with two box turtles and an armadillo lizard. The other is an eight-foot by eight-foot glass-and-wood cabinet that is clearly quite expensive and heavy. The backyard contains a wooden deck table and barbecue. In the garage is a treadmill.

We set to work, first laying out the floor runners and affixing moving blankets to the railings. Without boxes the lightest things are kitchen chairs and couch cushions, and these we put in the top kick that hangs over the cab of the truck. Either Jesse or I am normally in charge of packing the truck, but he will do it today as his back is in pain. Keith's shoulder injury is also a problem. I hope to myself that we'll be able to finish the job without injury to either movers or furniture.

Keith and I alternate between carrying out one-man pieces separately and two-man pieces together. Jesse packs into the load what we set down in the truck. Packing is an art, a far more difficult job than it seems. It is a giant Tetris game, filling the truck by arranging boxes and furniture into securely fitting layers that we call tiers--except the pieces are irregularly shaped, they need to be protected from damage, their weight must be taken into account, and they don't disappear when you complete a tier. It takes time to maximize efficient usage of space, but on a big move like today, it's crucial.

That said, Jesse is taking more time than he ought and the truck soon gets jammed up with furniture. He blames us for setting pieces down in the centre and not on the sides, which is valid but not really the point. Keith and I take our time to let Jesse catch up on his backlog.

The load goes well and without incident. Shelley manages to empty the aquarium, and we convince her that it will be safer in her vehicle, though we agree to take the turtle habitat minus its inhabitants. Keith and I carry everything, with the exception of the occasional chair or mirror or other small one-man pieces that Jesse grabs as he packs. Nothing is particularly heavy. But now it's time to tackle the big boy.

Jesse prepares the massive cabinet, wrapping it with two pads and then covering it in plastic shrink wrap to aid our grip. Keith's shoulder is already getting worse and, fearful, I quietly ask Jesse to carry the cabinet with me. He says he can't on account of his back--and Jesse never, ever declines a chance to prove his considerable strength, so he must really be hurting--but I insist he stay with Keith just in case the worst happens and the weight becomes too much. He agrees.

Great weight is one challenge, great size another. Combined in one item, these characteristics have their effects multiplied significantly. Anything eight feet tall, eight feet wide and four feet deep is difficult to manoeuvre. As I tip it toward Keith, I estimate it to be around four hundred pounds. Keith is cradling the top of the tilted piece, and I will lift from the diagonally opposite edge, walking backwards. At this angle the width of the piece becomes its height, and the edge I need to carry is hanging high over the stairwell. Too high, in fact, for me to hold the weight in my hands near waist level, which would be the most comfortable and stable position. Instead I must move down two steps and lift the edge with my arms nearly vertical above me, one step at a time. We do this for three steps, and then we must start to turn. To make the corner, Keith has to tilt the cabinet up vertically without losing his grip, and Jesse helps him as I lift and swing at the same time and we set it down smoothly on the landing having turned ninety degrees. Now we have nine more steps to the bottom.

Keith is finding it difficult to carry the piece without the weight tilted toward him. But to tilt it raises the edge I must lift from, and it's too difficult to keep it steady when I must lift it over my head. The size and weight of the cabinet is proving difficult on the stairs. Keith asks for a strap, and Jesse runs out to get it. The orange forearm strap is too short to loop around the bottom of the behemoth. Jesse runs out again and returns with two white piano straps, which he joins together. Wrapping each end of the strap around his wrists, Keith can now lift the piece with the weight tilted further toward me. With great effort we make it to the bottom, and I use the forearm strap so we can carry the cabinet out nearly on its side to clear the front doorway.

Praise for Darwin's Moving:
"With humour and unwavering journalism, Taylor Lambert has written an endearing tribute that lifts up the working class men who help us build a home. For once, we're invited into the movers' messy lives, to see their hopes and dreams on the mantle, and the classism in the closet. "
~ Omar Mouallem, co-author of Inside the Inferno
"With a clear-eyed Lambert behind the wheel, Darwin's Moving gives you a full tour of the class divide bubbling up through a rapidly suburbanizing city. In compassionate and concise prose, Lambert delves into the battered histories of the men around him, revealing stories full of joy, rage, fear, and abandonment. Open it up and get in the truck. "
~ Andrew F. Sullivan, author of All We Want is Everything
". ..the collision of rich and poor is made starkly evident. "
~ Quill & Quire
". ..an illuminating trip to a realm of which we're only dimly aware. Bonus: You'll learn how to pack a van good and tight. "
~ Sarah Murdoch, Toronto Star
"Darwin's Moving is about Calgary but it's a larger story, too, about the ways Darwin's Moving is not unique, about class and the often-transient men tasked with moving our homes. "
~ Jade Colbert, The Globe and Mail
"Lambert has shed light on a corner of the Canadian working world few even think about. The ghost of Orwell approves. "
~ Morley Walker, Winnipeg Free Press
"You'll never look at a moving truck the same way again. "
~ Steven Sandor, Avenue Edmonton