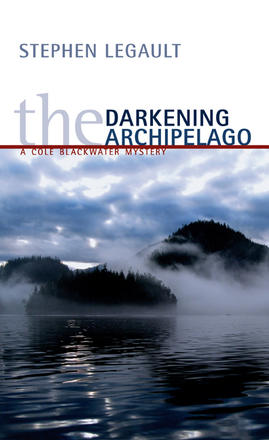 Eight months after his own brush with death over Alberta's Cardinal Divide, Cole Blackwater has learned that his good friend and former client Archie Ravenwing is presumed dead on the waters of British Columbia's Broughton Archipelago. Days before his disappearance, Ravenwing ... Read more

Eight months after his own brush with death over Alberta's Cardinal Divide, Cole Blackwater has learned that his good friend and former client Archie Ravenwing is presumed dead on the waters of British Columbia's Broughton Archipelago. Days before his disappearance, Ravenwing was on the brink of unravelling a corporate conspiracy surrounding an outbreak of sea lice that could decimate wild salmon along the BC coastline. While Cole and newspaper reporter Nancy Webber search for answers, Cole is haunted by the dark secret surrounding his own father's mysterious death. For Nancy Webber, whose long-forgotten feelings for Cole have risen to the surface again, getting to the bottom of Cole's family history becomes both a professional and personal obsession. The Darkening Archipelago, the second book of the Cole Blackwater series, is a race to keep both human souls and wild ecosystems from falling into darkness.

Stephen Legault has been a social and political activist for twenty years. He has worked with local, national, and international conservation organizations to protect Canada's endangered species, wilderness, and to combat climate change. In July 2005 he launched HighWater Mark Strategy and Communications to work with ethically driven businesses, the labour movement, political parties, and social justice, arts, and cultural organizations. Through this effort, Stephen helps companies involve their members, customers, and clients in the social or environmental mandate of the business, and assists non-profit organizations to become more strategic and effective. An avid cross-country runner, skier, hiker, and paddler, Stephen has an intimate

His first book,Carry Tiger to Mountain: The Tao of Activism and Leadership, was published in April 2006. He is the father of two beautiful boys, Rio Bergen and Silas Morgen. He lives in Victoria, BC.For more information, visit Stephen Legault's website at www.highwatermark.ca.

Other titles by Stephen Legault