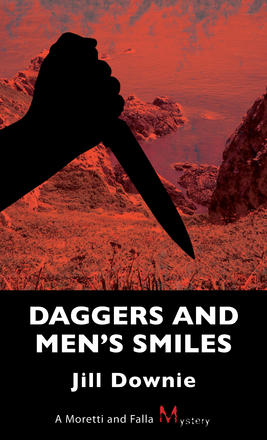 On the English Channel Island of Guernsey, Detective Inspector Ed Moretti and his new partner, Liz Falla, investigate vicious attacks on Epicure Films. The international production company is shooting a movie based on British bad-boy author Gilbert Ensor’s bestselling novel about an Italian aristocratic family at the end of the Second World War, using fortifications from the German occupation of Guernsey as locations, and the manor house belonging to the expatriate Vannonis.
When vandalism escalates into murder, Moretti must resist the attractions of Ensor’s glamorous American wife, Sydney, consolidate his working relationship with Falla, and establish whether the murders on Guernsey go beyond the island.
Why is the Marchesa Vannoni in Guernsey? What is the significance of the design that appears on the daggers used as murder weapons, as well as on the Vannoni family crest? And what role does the marchesas statuesque niece, Giulia, who runs the family business and is probably bisexual, really play?

Jill Downie is the author of A Passionate Pen: The Life and Times of Faith Fenton, awarded the Drummer General’s Award by Richard Bachmann of A Different Drummer Books, and Storming the Castle: The World of Dora and the Duchess, which received the Hamilton and Region Arts Council Literary Award for non-fiction. Previously, she published five historical novels and has had plays performed at various festivals, including the Toronto Fringe. She lives in Ancaster, Ontario.

Downies experience with historical novels (good research), her first-hand knowledge of the location (she lived there as a girl) and her theatre skills (slick dialogue, good characters) stand her in good stead in what appears to be the beginning of a new series.

There are fascinating depths to both the novel and to the mystery that has been written about it, depths that do indeed reach back to the war and its bitter events. Moretti is a strong and endearing protagonist in a novel jammed with characters.

Both Ed Moretti and Liz Falla are attractive investigative figures, with typically appealing off-work passions, including the music of their different generations and tastes. And theres plenty of good, interesting information, painlessly administered, about the multiple sides of Italian politics and loyalties during the war, as well as the gender politics of the time.

All of the aspects of the book were perfect for an interesting mystery.

a deftly constructed story with bunkers and decaying buildings serving as vital elements for Downies clever assumptions, clues and clouded truths. There are colourful moments of storytelling, working with descriptions and character portraits that transport this from a mere mystery to a convincing, complex story.