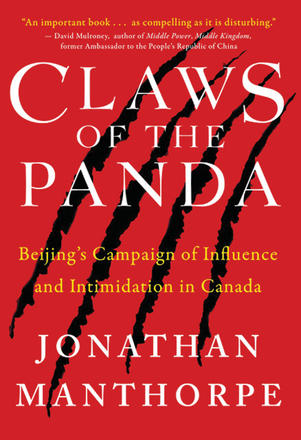 Claws of the Panda

Claws of the Panda

Claws of the Panda tells the story of Canada’s failure to construct a workable policy towards the People’s Republic of China. In particular the book tells of Ottawa’s failure to recognize and confront the efforts by the Chinese Communist Party to infiltrate and influence ... Read more

Claws of the Panda tells the story of Canada’s failure to construct a workable policy towards the People’s Republic of China. In particular the book tells of Ottawa’s failure to recognize and confront the efforts by the Chinese Communist Party to infiltrate and influence Canadian politics, academia, and media, and to exert control over Canadians of Chinese heritage. Claws of the Panda gives a detailed description of the CCP’s campaign to embed agents of influence in Canadian business, politics, media and academia. The party’s aims are to be able to turn Canadian public policy to China’s advantage, to acquire useful technology and intellectual property, to influence Canada’s international diplomacy, and, most important, to be able to monitor and intimidate Chinese Canadians and others it considers dissidents. The book traces the evolution of the Canada-China relationship over nearly 150 years. It shows how Canadian leaders have constantly misjudged the reality and potential of the relationship while the CCP and its agents have benefited from Canadian naivete.

Jonathan Manthorpe is the author of three books on international relations, politics, and history, including the national bestseller and Globe and Mail Top 100 Books of 2019, Claws of the Panda: Beijing’s Campaign of Influence and Intimidation in Canada. His previous books include Forbidden Nation: A History of Taiwan and The Power and the Tories: Ontario Politics 1943 to the Present. In recent years he has written columns for a wide variety of publications in Canada and overseas. Over his fifty-year career as a journalist, he has been the foreign correspondent in Asia, Africa, and Europe for Southam News, the European Bureau Chief for the Toronto Star, and the national reporter for The Globe and Mail. In 1981 and 1982, Manthorpe was an advisor in London to Prime Minister Pierre Elliott Trudeau on the patriation of the Canadian constitution. For the last few years, he has been based in Victoria, British Columbia.

"At a time when concern is rising in various parts of the globe that Chinese overseas investment and migration may not be benign, the latest book by Jonathan Manthorpe is timely. "

"Claws of the Panda is much needed exposure of the Chinese Communist Party's step-by-step engagement throughout Canada and the world to advance its own economic, political, ideological, and strategic interests at the expense of other countries' soverignty, security, and economic well-being, if necessary. Manthorpe's meticulous research and piercing analysis are the kind of tough love 'here are the facts' journalism those who care about freedom and democracy in Canada and abroad need in order to understand the Chinese riddle. A must read for every politician, business person and foreign policy type who seeks a more hard-nosed yet balanced understanding of official and discrete Chinese intent. "

— Hugh Segal, Principal of Massey College and former Chair of the Foreign Affairs Committe of the Canadian Senate

“Veteran journalist Jonathan Manthorpe explains in his remarkable new book, Claws of the Panda, the Chinese Communist Party has spent decades quietly infiltrating Canada in order to acquire influence over economic and political decision-making. It succeeded in conveying an image of China as a trustworthy partner rather than a demanding superpower, an image that became all the more attractive after Donald Trump was elected as President of the United States. But now, after the arbitrary detentions of Michael Spavor and Michael Kovrig – and the resentencing of Robert Schellenberg with the death penalty – Canada is in a position to reassess the risks of collaboration with China. ”

"Manthorpe's account of China's clandestine efforts to influence people and politics in Canda is as compelling as it is disturbing. This is an important book for anyone who wants to understand China's growing influence in Canada. "

“Misconceptions about the Middle Kingdom have blinded Canada for decades. That’s the inescapable message of Jonathan Manthorpe's Claws of The Panda. ”

“China has no rule of law as it is understood in Western liberal democracies; the judicial system in China works to the benefit of the government only. A criminal in China is someone the CCP (Chinese Communist Party), says is a criminal. ”

“Ivy Li worries that the Chinese Communist Party might be able to affect the outcome of Canada’s fall election using a campaign of disinformation and by silencing critics.

Li is not alone. Li helped organize a recent dialogue that featured Jonathan Manthorpe, author of the best-selling book, The Claws of the Panda: Beijing’s Campaign of Influence and Intimidation in Canada, where she and others talked about their fears and experiences. ”

"[Claws of the Panda] is a sweeping and authoritative book on how China has spied on Canada, infiltrated businesses, stolen government secrets and harassed Canadian-Chinese citizens for decades. "

"One of the most valuable things that Claws of the Panda does is bring together all of the accounts – most previously reported – of the ways in which China is affecting various aspects of Canadian life. From post-secondary education to business and real estate to foreign policy, the range of these efforts is staggering . .. Claws of the Panda fills an important need. "

"In Claws of the Panda, veteran journalist and commentator Jonathan Manthorpe issues a challenge to Canadians to engage in shaping our relationship with a newly assertive China. Rigorously researched, drawing on primary sources and his own deep knowledge of China, Manthorpe paints a convincing portrait of a country intent on moulding the relationship with Canada on its own terms and in its own interests. A must read. "

Other titles by Jonathan Manthorpe