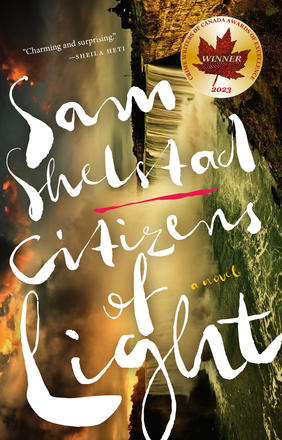 Colleen Weagle works in a call centre and lives in a bungalow with her mother in a quiet Toronto suburb. In her spare time she writes spec scripts for a CBC riding-school drama (her mother’s favourite) and plays an online game set in a resort populated by reindeer. It’s a typical life. Except three months ago Colleen’s husband Leonard—who led a similarly monotonous life—was found in a bog in the middle of the night, a two hours’ drive from home. Dead.

With a flatly optimistic belief in the power of routine, Colleen has been soldiering on, trying not to think too hard about all the unknowns surrounding the death. But when a local news photo twigs Colleen’s memory of a mystery attendee at Leonard’s funeral she snaps into action.

In the maddening company of her ornery co-worker Patti, she heads to Niagara Falls on a quest to find the truth behind the death. Amid the slot machines and grubby hotels, the pair stumble into the darker underworld of a faded tourist trap. What they find will lead straight to an episode from Colleen’s adolescence she thought she’d put firmly behind her.

Bleakly madcap, with deadpan dialogue, Shelstad’s debut novel is a noir anti-thriller reminiscent of Twin Peaks and the work of Ottessa Moshfegh and early Kate Atkinson. He captures call-centre life, ramshackle tourist attractions, and suburbia with wit and sharp realism, and reveals the undercurrents of melancholy and the truly bizarre that can run beneath even the most seemingly mild-mannered lives.

Sam Shelstad is the author of the story collection Cop House (Nightwood Editions, 2017). He is a regular contributor to McSweeney’s Internet Tendency and his work has appeared in magazines including The New Quarterly and Joyland. He was longlisted for the CBC Short Story Prize, a runner up for the Thomas Morton Memorial Prize, and finalist for a National Magazine Award. Shelstad lives in Toronto. Citizens of Light is his first novel.

When we got to the falls though—my God. I’d never seen anything like it. I’d looked at pictures, but you can’t tell from pictures how big the falls really are. How majestic. I cried. Then Patti pointed out that I was looking at the American side and turned me in the direction of the Canadian falls, which were even more majestic. This was what I’d seen in all those photographs. Horseshoe Falls. I was crying and sweating, and I almost collapsed right there on the sidewalk.

There were other tourists lined up along the railing overlooking the falls, seagulls swarming overhead. People taking pictures. So many people. I couldn’t believe it. Once, when I was in sixth grade, I was walking home from school and a police officer passed by on a horse. As he passed, the horse turned and looked at me. We stared into each other’s eyes for what felt like a full minute. It was overwhelming in the same way the falls were overwhelming. I couldn’t believe that what stood in front of me was actually there. I felt inspired. I would succeed in my mission.

“I could look at this for hours and hours. ”

“Casino, Colleen. Let’s move it along. ”

I could always go back later. We were there for a whole weekend. We walked back up the winding sidewalk toward the main street, where all the fancy hotels stood. When we passed this gorgeous fountain filled with nickels and dimes, I dipped my hands in and poured the fountain water down the back of my shirt.

“Really?” I assumed she was talking about the fountain. Like we should climb in and swim around. “I don’t know. ”

“Come on. The entrance is over there. ” Patti pointed to a series of glass doors on the other side of the fountain, up the drive.

I held my breath as we walked through the big glass doors to the casino. The man from Leonard’s funeral could potentially be standing on the other side. Of course, the doors were transparent, so I knew he wasn’t standing right there. Somewhere close by though. But the doors didn’t lead right into the casino. We were in a kind of shopping mall atrium. High-end clothing shops, purses, diamonds. Somewhere to spend your winnings should you be impatient. A last-ditch effort by the casino to keep customers’ money on the property. The real entrance to the casino was next to a watch store and the lineup to get inside was long—and getting longer.

Patti and I joined the queue. The line snaked around a curved wall, and when we reached the halfway point, I could see attendants checking ids up ahead. We shuffled forward, slowly. My phone buzzed.

“I’ll meet you inside,” I told Patti, then stepped back out into the atrium.

“Colleen, this is Ken from the office. You’re an hour late. What’s going on?”

“You’re late. I’m looking at your chair right now. You’re not in it. Last I checked, your chair won’t complete surveys by itself. Are you on your way?”

“But I have the weekend off. ”

“You most certainly do not. I remember our conversation quite clearly. This is unacceptable behaviour. I’m looking at your empty chair right now. Chairs don’t complete surveys. ”

“Patti told me she talked to you. ”

“Is Patti with you? I was going to call her next. This is ridiculous. We’re down two diallers and Bank of America is starting tonight. How soon can you get here?”

I rejoined the line for the casino. Patti was long gone. I couldn’t believe it. She’d told me I had the weekend off.

I waited. A woman in a brown blazer glanced at my driver’s license and waved me through.

My first time inside a real casino. I whispered “wow” slowly, like some moron. Like a rube. It was all so overwhelming. There were seemingly thousands of slot machines, stretching back farther than I could see. It was like a glitzy forest in a futuristic dream. The noise was instantly mesmerizing. All the machines chiming away. It sounded like millions of tiny harps talking to each other in heaven.

I could have stood there in wonderment for hours, but I had to find Patti. I walked down an aisle of tv show–themed slot machines—Big Bang Theory, Sex and the City—and kept watch for Patti and the man from the Metro.

I had pictured Fallsview as this classy joint, like in the movies. Ocean’s Eleven with Brad Pitt and Clooney. Women in ball gowns and glittering jewels, the men in tuxes. Soft jazz. Witty remarks around green tables. Champagne. But people were wearing shorts and fanny packs. nascar visors. Clunky plastic running shoes. They sat back in their chairs, staring dead-eyed at the machines. They looked like bored babies. The machines had these cranks you could pull to spin the pictures, like how you see them on tv, but everyone tapped a button instead. I wasn’t being judgemental—I certainly wasn’t wearing a ball gown. I had on shorts and a pink ballcap. It was interesting though. A little surprising. I was learning so much about the world, and I hadn’t been away from Toronto a full day yet.

—from Citizens of Light

"Once I started reading Citizens of Light, I couldn’t put it down—in true Shelstad form, it’s funny and charming, but also achingly human. A refreshingly unique literary voice. " —Amy Jones, author of We're All in This Together

"In Citizens of Light, Sam Shelstad has created a darkly comic and compelling story about a truly unique call centre warrior on a mission to solve the mystery of her husband's death. Trust me, you'll laugh, think, and keep turning the pages. " —Terry Fallis, two-time winner of the Stephen Leacock Medal for Humour

"Clever and oddly sweet, the comedy in Citizens of Light has teeth, and Shelstad manages the trick of keeping all the strangeness grounded and human. " —Naben Ruthnum, author of A Hero of Our Time

Other titles by Sam Shelstad