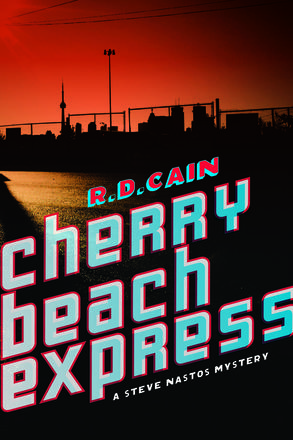 A police detective is accused of murder in this novel that “delivers on all levels: action, courtroom drama … and a show-stopping climax. ” — The Hamilton Spectator

Until recently, Steve Nastos was a respected Toronto detective and a member of the sexual assault unit. ... Read more

A police detective is accused of murder in this novel that “delivers on all levels: action, courtroom drama … and a show-stopping climax. ” — The Hamilton Spectator

Until recently, Steve Nastos was a respected Toronto detective and a member of the sexual assault unit. Now he’s in custody, accused of killing his young daughter’s dentist after learning of the man’s unspeakable crimes against children.

Freed on bail, he has one hope: to track down the actual killer, in a town where laws are simply guidelines and law enforcement agents adhere to their own moral relativism. Held back by a recovering alcoholic lawyer, a rogue cop, and a two-faced judge, Nastos has the cards stacked against him. Then his estranged but still beloved wife inadvertently becomes involved in the case, and the stakes become even higher.

He has to protect his family — but first he must save himself.

﻿R.D. Cain has worked for the last 18 years in the emergency services as a paramedic, firefighter, and police officer. He lives in Scarborough, Ontario.

Behind the façade of the crisp, dark suit, under a sharp haircut and behind pale blue eyes, was a place of anguish. Steve Nastos walked down the street, avoiding eye contact with various lawyers, court clerks and police officers in the court district of downtown Toronto. Not long ago, he had been a respected detective in the Sexual Assault Unit, a father to a seven-year-old girl and a husband to a beautiful wife. He now wondered what kind of a father or husband he could be in jail.

Nastos was flanked by two uniformed officers a step or two behind him. The shorter, older officer had his hand on Nastos’ elbow and had a good grip, the way cops always seemed to. Nastos knew why, of course: if someone in custody was about to run for it, he would unconsciously become rigid in his upper body, and a good cop paid attention for any sign of tenseness in the arm or any other sign that the officer needed to wrench the handcuffs or slam the guy into a wall. Of course, Nastos was thinking of doing no such thing.

Despite his best efforts, his smile eroded at times as the natural walker’s sway of his arms was constricted and squeezed from the handcuffs digging into his wrists behind him. His shoulders, aching for relief, burned from the weight of his increasingly heavy arms. The last time he had worn cuffs was in training at Police College, twenty-five years and thirty pounds ago; they were a little tighter and heavier now.

Nastos observed the court building, stone and marble coming together in an imposing, rigid and cold shell. Engraved on an archway was something written in Latin, probably a courtesy warning from the lawyers to have one’s wallet ready if one wanted anything even resembling justice. And it was just like a lawyer to post it in a dead language. He wasn’t sure he had ever noticed it before.

With a cool September wind behind him, he pushed a dream of freedom aside and walked up the steps, past an archway into the court building, transforming from a free man, a man of the law, to a man accused of a crime. He hoped for an imaginary wall to surround him, rendering him invisible to the crowd. With it he would drift into the back of bail court, anonymous in the audience. He’d say a few yes sirs and no sirs when called upon, then just float back out, unnoticed and unremembered. For that brief amount of time, he would just try to become someone else, a figment of his own imagination. No more perceptible than a ghost drifting through a thick, still fog.

His shoes hardly made a sound as he walked up the marble steps to the landing, past the pillars, through the turnstile and through security. He turned down the left hallway, weaving around and through the crowd. Years of pacing this very building, waiting for verdicts, allowed him to arrive at Courtroom 101 — the bail court — having rarely had to raise his eyes to anyone.

He made it as far as the double doors when he heard a voice from the side call out, “That’s him there, roll the camera. Detective Nastos?”

In that moment, Nastos relinquished his hopes of anonymity, took a deep breath and braced for impact. His body became heavy. He was aware that his heart was racing, his cold hands were sweaty and his wrists were aching from the cuffs gnawing into him like an old dog’s dulled teeth. He saw reporters and camera crews permeating through a deteriorating wall of courtroom derelicts as the media swarmed in around him.

“Did he deserve what he got, Detective?” another tried.

Nastos thought it would be best to shut down. It was easier just to abandon a part of his humanity, to give up his sentient, communicative being and accept his fate. Questions came in a wall of noise from the dozen men and women wanting their quote for the day. Just shut down, let it all go. What could have gone on for an eternity ended when one of the police officers behind Nastos grabbed the door handle and directed him to the temporary safety of the courtroom.

Long immune to the odours, filth and scum of courts, Nastos stood still, looking for a place to sit with his small entourage of officers. The older of the two officers pointed to the defense lawyers’ desk and without a word Nastos headed directly for it. Looks like I move to the front of the line.

“The first of a planned trilogy, the next installment is eagerly anticipated and this debut novel should be read by all crime story buffs. ” — Scene Magazine

“Delivers on all levels: action, courtroom drama … and a show-stopping climax. ” — The Hamilton Spectator