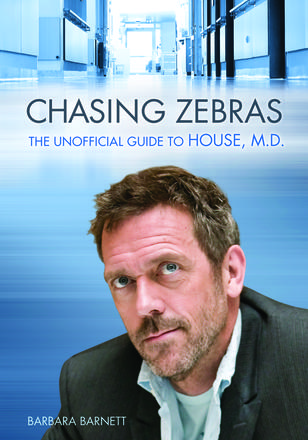 “I look for zebras because other doctors have ruled out all the horses. ” — Dr. Gregory House

Medical students are taught that when they hear hoofbeats, they should think horses, not zebras, but Dr. House’s unique talent of diagnosing unusual illnesses made House, M. ... Read more

“I look for zebras because other doctors have ruled out all the horses. ” — Dr. Gregory House

Medical students are taught that when they hear hoofbeats, they should think horses, not zebras, but Dr. House’s unique talent of diagnosing unusual illnesses made House, M. D. one of the most popular and fascinating series on television in the mid-2000s (and still today, as fans binge-watch via on-demand). In Chasing Zebras: The Unofficial Guide to House, M. D., Barbara Barnett, widely considered a leading House expert, takes fans deep into the heart of the show’s central character and his world, examining the way this medical Sherlock Holmes’s colleagues and patients reflect him and each other; how the music, settings, and even the humor enhance our understanding of the series’ narrative; what the show says about modern medicine, ethics, and religion; and much more.

Complete with an episode-by-episode guide of the first six seasons and numerous interviews with cast members, producers, and writers, Chasing Zebras is an intelligent look at one of television’s most popular shows.

Barbara Barnett ?writes the regular feature “Welcome to the End of the Thought Process: An Introspective Look at House, M.D.” for Blogcritics magazine, where she also serves as a television and film editor. She and her husband Phillip live in the northern suburbs of Chicago.

“What this book really did for me, though, was teach me to better understand and appreciate good scriptwriting. Author Barnett, whose own writing I found impressive, explains how the stories and the characters are developed and presented. . . . I think anyone reading this book will become a smarter viewer, not only of this series, but of other dramas. ” — Exclusive Magazine

“Barnett loves the show, as is evidenced in her very thorough guide to every episode up to the 6th season. She neatly divides each storyline into its plot components as well as fun detours. . . . But if you thought the guide was all there was to the book, you’d be wrong: there’s 169 pages of character bios, ethical and moral analysis, and detailed explanations of every pop culture Easter Egg the show has hidden for its super fans. ” — Crushable

“Like her blog, it's a great read, especially her analysis of each character . . . Sure to please a House fan — well, at least it pleased this House fan. ” — Cozy Nook

"You might be familiar with Barbara Barnett's work. ...But with Chasing Zebras, she rises by exploring House, the show and the characters, in every aspect possible. Nothing is left out . . . Ms. Barnett is always spot on. She makes valuable and nuanced arguments . . . I can assure you that you will inhale this delightful read and won't be able to put it down until you're done. A real treat!" — Series. Nu

"In Barnett's book, readers are brought in to an expert's passionate view of the show and its characters. " — Buddy TV