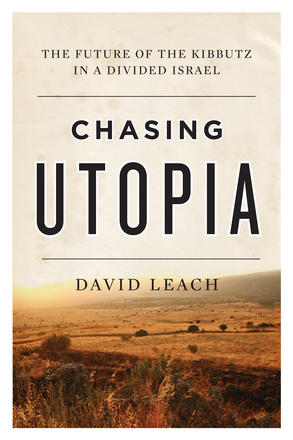 A fascinating, non-partisan exploration of an incendiary region

Say the word “Israel” today and it sparks images of walls and rockets and a bloody conflict without end. Yet for decades, the symbol of the Jewish State was the noble pioneer draining the swamps and making ... Read more

A fascinating, non-partisan exploration of an incendiary region

Say the word “Israel” today and it sparks images of walls and rockets and a bloody conflict without end. Yet for decades, the symbol of the Jewish State was the noble pioneer draining the swamps and making the deserts bloom: the legendary kibbutznik. So what ever happened to the pioneers’ dream of founding a socialist utopia in the land called Palestine?

Chasing Utopia: The Future of the Kibbutz in a Divided Israel draws readers into the quest for answers to the defining political conflict of our era. Acclaimed author David Leach revisits his raucous memories of life as a kibbutz volunteer and returns to meet a new generation of Jewish and Arab citizens struggling to forge a better future together. Crisscrossing the nation, Leach chronicles the controversial decline of Israel’s kibbutz movement and witnesses a renaissance of the original vision for a peaceable utopia in unexpected corners of the Promised Land. Chasing Utopia is an entertaining and enlightening portrait of a divided nation where hope persists against the odds.

David Leach is the chair of the Department of Writing at the University of Victoria in British Columbia. His award-winning feature writing has appeared in Canadian Geographic, Financial Post Business, Communities, Explore Magazine, and other publications. His first book, Fatal Tide: When the Race of a Lifetime Goes Wrong, investigated our modern appetite for “extreme” experiences. He lives in Victoria, B.C.

“Leach reveals an imaginative and sharply inquiring mind, a gift for capturing the social complexity of the Israeli kibbutz and the troubled society beyond through humorous, moving, and often thrilling anecdotes. Lively, unsentimental, yet deeply empathic, Chasing Utopia is a new classic in kibbutz scholarship, a vibrant story with real heart and intellect. ” — Ranen Omer-Sherman, author of Imagining the Kibbutz: Visions of Utopia in Literature & Film, endowed chair in Judaic Studies, University of Louisville

“Wonderfully written. Through the story of the kibbutz, Leach captures all that is beautiful and less beautiful in Israel. It is a story about partnership, solidarity, and estrangement in various levels and dimensions. A good read for anyone interested in utopia, Israel, and the way we deal with unfulfilled dreams. ” — Dr. Oded Lowenheim, chair of the Department of International Relations at the Hebrew University of Jerusalem

“Chasing Utopia is an exceptionally well-researched and beautifully written bildungsroman: a heartbroken young man sets off for a kibbutz in Israel, and over the next twenty years both he and that country experience a coming of age. Former kibbutz volunteers will enjoy an often hilarious romp that’s sure to flood them with memories, and readers wondering about the allure and challenges of utopian communities will find a probing examination that takes them to lesser-known corners of Israel and the West Bank. ”  — Jessamyn Hope, author of Safekeeping

“Leach’s report is both affectingly personal, delving into many intimate stories of visionaries, and a sound historical study . . . An eye-opening look at an Eden of eco-villages gradually giving way to economic exigencies. ” — Kirkus Review

“Despite his obvious love of these communes, Leach maintains a neutral stance when discussing the conflict that is tearing Israel apart, and writes with great empathy for all sides involved. He is at times funny and self-effacing, but he is also keen-eyed and generous in his observations. Written with tremendous passion, Chasing Utopia is a stellar achievement. ” — Quill & Quire