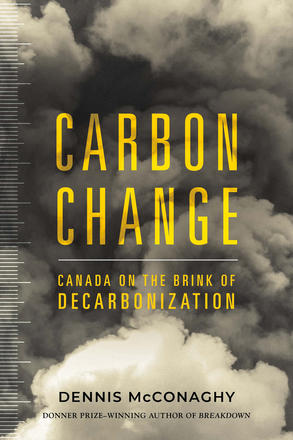 An investigation into the scale and costs of transitioning our energy systems to achieve net-zero emissions.
Canada and the rest of the developed world have committed to decarbonizing basic energy systems, but do this country’s citizens and governments truly understand the ... Read more

An investigation into the scale and costs of transitioning our energy systems to achieve net-zero emissions.
Canada and the rest of the developed world have committed to decarbonizing basic energy systems, but do this country’s citizens and governments truly understand the sacrifices ahead and are we willing to accept those sacrifices in the name of reducing the impact of climate change? Will the rest of the developed world take on the necessary costs, and will Canada forge ahead with decarbonization, even if other countries do not?
Carbon Change explores this most visceral of public policy choices for Canada, with a deep dive into recent North American energy and climate policy, the enduring impact of the Covid-19 pandemic, and political processes across the developed world with respect to dealing with climate change risks. It offers a dispassionate analysis of the scale and cost of trying to realize the aspiration of decarbonization. Dennis McConaghy asks if a more balanced and nuanced approach is possible to mitigate the effects of climate change, while still optimally using hydrocarbons to maximize global human welfare.

Dennis McConaghy is a Canadian energy executive who has nearly forty years of industry experience in infrastructure development and is the author of Dysfunction: Canada after Keystone XL and Breakdown: The Pipeline Debate and the Threat to Canada’s Future, which won the Donner Prize. He lives in Calgary.

Dennis McConaghy's treatise provides a wonderful review of the evolution of climate policy in Canada. While most Canadians support the eventual energy transition, McConaghy makes clear that decarbonization by 2050 will be expensive and unlikely feasible. Whether one agrees or not, his book challenges us to consider an alternative approach with an objective to keep temperatures rising no more than three celsius by the end of the century.

The must-read book about Net Zero by 2050, the massive “energy transition” that without workable technologies requires decarbonization. This can only be achieved by government control and fossil fuel rationing, dramatically affecting everyone. What makes McConaghy’s analysis timely is the last big undertaking by central planning, COVID pandemic lockdowns. Benefits indeed, but at what cost? Not a climate change denier, McConaghy proposes carbon taxes and markets as the only fair and workable solution to this global challenge.