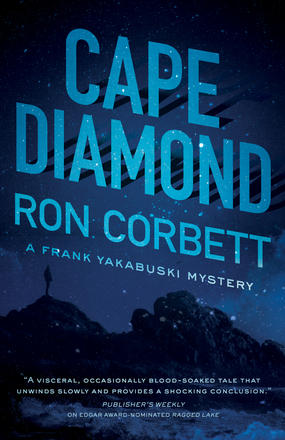 Cape Diamond, the second book in the Frank Yakabuski Mystery series, is atmospheric and action-packed. Set near the Northern Divide — as was the first installment, Edgar Award nominee (Best Paperback Original), Ragged Lake — the book opens with Yakabuski called to investigate a gruesome crime scene. A body has been left hanging from a schoolyard fence. On closer inspection, Yak finds a large diamond in the murder victim’s mouth.

Two criminal gangs — the Shiners and the Travellers — are fighting with each other, and Yakabuski turns to his father, a now-retired detective who has a long history with the gangs, for advice in the interrogation. Is the conflict over the murder of two men? The kidnapping of a little girl? Or, possibly, the diamond found in Augustus Morrissey’s mouth? As if this weren’t enough for one detective, a serial killer is taking a deadly road trip through the United States, heading towards the Northern Divide.

Ron Corbett weaves the various strands together with ingenuity, making Cape Diamond a brooding, suspense-filled story of hubris, betrayal, and evil deeds; his writing is sparse and taut, compelling the reader to follow the action and gang conflict to a surprise ending.

Ron Corbett is an author, journalist, and broadcaster living in Ottawa. He is the author of seven nonfiction books; his first novel, Ragged Lake, the first book in the Frank Yakabuski mystery series, received rave reviews and an Edgar nomination by the Mystery Writers of America for Best Original Paperback. He is married to award-winning photojournalist Julie Oliver.

The first ones to cross Filion’s Field that Monday morning were shift workers heading to the O’Hearn sawmill on Sleigh Bay. The field was on the west end of an escarpment that soared high above the Springfield River, and each worker would have left a high-rise apartment, lunch pail and coffee thermos in hand, then taken the shortcut across the sports field to be standing at the Sleigh Bay bus stop by 5:45 a. m.

The sun appeared that morning at 6:41, and so the men walked in the dark. Likely they walked with their heads down and eyes to the ground, in no hurry to greet the day, as they were shift workers heading to the O’Hearn sawmill on Sleigh Bay.

They could have missed it. When the workers were tracked down by police later that day — there were nine in total, all men — not one was interviewed for more than five minutes.

Next to cross the field were early-morning workers on their way to the city of Springfield: file clerks and security guards, dishwashers and parking lot attendants, construction labourers and split-shift bus drivers. By the time these workers crossed, the sun was in the sky, a winter sun that would have been more white than yellow, that would have shone through the birch and spruce at the edge of the escarpment and the canyon openings between the high-rise apartment buildings, casting shadows that would have lain directly in their path. Police were able to track down twenty-two of these workers. Each was interviewed at length. No one remembered seeing anything unusual about the east-side fence of Filion’s Field that morning.

The last to cross were children, taking another shortcut, this one leading to a cut-opening in the fence and beyond that a trail through the woods that brought them to Northwood Elementary School. It was hard to get an accurate number for the children. Police estimated there could have been as many as thirty.

During first recess, a half-dozen boys returned to Filion’s Field and that was when a police officer spotted them, throwing rocks at something tied to the fence, a target of some sort. The rocks arced in the air. The boys laughed. By then, the sun had risen high enough to be shining directly through the chain-link fence that surrounded the field, casting geometric shadows on the soccer pitch that replicated the metal mesh.

The cop’s name was Donna Griffin, a young cop who had come to the North Shore projects to serve a family court warrant. She watched the boys, trying to figure out what game they were playing. Eventually, she started walking toward them. When she was spotted, the boys turned as one, like a herd of deer spotting a hunter. Then they took off as one, heading toward the hole in the fence and the path beyond.

The cop knew better than to give chase, as there was no way she was going to catch those boys. A couple of them had looked fast enough to make All City. She watched them disappear into the woods, and before the last child’s back vanished, she realized no boy had turned to yell at her. Not one jeer or taunt when it was obvious she was not giving chase. A half-dozen boys. From the North Shore projects.

She kept walking. Was halfway across the pitch when the object tethered to the fence began to take shape, began to occupy time and space and become a thing defined. She stopped fifteen feet short of the object. The shadows fell across her, not in the pattern of chain-link, but as two large intersecting lines. She stared up at the fence and found herself wishing she had chased those boys.

“Like the first book, the writing in this one is sparse and lean, echoing the harshness and isolation of the land . . . The protagonist evolves, and Corbett lays a strong foundation for what promises to be a truly captivating series. ” — Publishers Weekly Starred Review

“Ron Corbett’s second Frank Yakabuski book proves conclusively that this series has a long life ahead. The setting is as exotic as it gets and the characters are sharp. All that and the terse style and quick dialogue make things move fast . . .  All this works well in a complicated but perfectly structured plot. We look forward to the next Yakabuski book. ” — The Globe and Mail

“Cape Diamond is a rich and detailed crime novel with motives as dark and forbidding as its Canadian setting. A unique mixture of modern crime procedural gangland drama, rural folklore, and revenge tale with a superhuman killer . . . combine for a thrilling and suspenseful ride. ” — Mystery Scene Magazine

“Drawing heavily on his experiences and travels as a journalist, Corbett enlivens the story with vivid descriptions of the wild, forbidding landscape and the volatile, warring inhabitants who dwell there, as well as cleverly weaving together the numerous narrative threads. Dark, gory, and cinematic, with a constant ominous tone, Cape Diamond is a compelling crime tale with plenty of shocks, surprises, and visceral thrills. ” — Lancashire Post

“Corbett is a skilled writer whose gifts go beyond depicting the typical crime-novel hurlyburly of complex plot and violent acts. He's also good at revealing emotions that range from the cold to the turbulent and the quieter workings of a smart, fretful investigative brain. ” — London Free Press