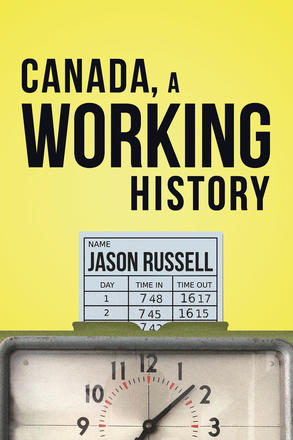 A deep exploration of the experience of work in Canada

Canada, A Working History describes the ways in which work has been performed in Canada from the pre-colonial period to the present day. Work is shaped by a wide array of influences, including gender, class, race, ethnicity, ... Read more

A deep exploration of the experience of work in Canada

Canada, A Working History describes the ways in which work has been performed in Canada from the pre-colonial period to the present day. Work is shaped by a wide array of influences, including gender, class, race, ethnicity, geography, economics, and politics. It can be paid or unpaid, meaningful or alienating, but it is always essential. The work experience led people to form unions, aspire to management roles, pursue education, form professional associations, and seek self-employment. Work is also often in our cultural consciousness: it is pondered in song, lamented in literature, celebrated in film, and preserved for posterity in other forms of art. It has been driven by technological change, governed by laws, and has been the cause of disputes and the means by which people earn a living in Canada’s capitalist economy.

Ennobling, rewarding, exhausting, and sometimes frustrating, work has helped define who we are as Canadians.

Jason Russell has a Ph.D. in history from York University and is an associate professor at SUNY Empire State College in Buffalo, New York. He lives in London, Ontario.

This book is about how work in Canada changed from the period of European colonization to 2020. It is intended to provide a broad overview of major developments and trends in Canada and show how work was shaped by wider influences in Canadian society. Work is a central human activity that has innate value whether or not it involves receiving compensation. The historical development of work in Canada parallels the nation’s progress. Workers in their many times, places, and occupations made Canada, and their work is ongoing.

The narrative is divided into six parts, which cover time periods of varying scope. Part I describes European colonization to the years before Confederation in 1867. Canada was initially a collection of disparate colonies and long-established Indigenous nations that was formed into a country, with the different political actors involved showing varied levels of enthusiasm for the new nation. Canada’s ties with Britain remained strong during the long period from colonization to Confederation, and the nation was gradually formed within the context of an occasionally fraught relationship with the United States.

Part II details a shorter period from Confederation to the 1930s. Canada experienced profound change between 1867 and 1939. Canadian workers most importantly left their civilian jobs in droves in 1914 to enlist in the army to fight in Europe. Many of them did not return to resume their civilian lives. Canadians built a railway from coast to coast, welcomed scores of immigrants, built new cities and factories, and experienced industrialization. They also formed workers’ organizations, created new business structures, and combined themselves into professions.

Part III covers the critical period from 1945 to 1969. Canada was much different at the end of the Second World War than when the conflict started. The Great Depression drove unemployment to record heights in the 1930s, and the war eliminated it in short order. Canada became a major contributor to the war effort. Women streamed into industrial jobs in large numbers for the first time. Unions were inspired by the struggles waged by their American comrades, and they gained the right to engage in legal collective bargaining.

The 1950s and 1960s were prosperous decades for many but not all Canadians. Wages often met or exceeded the cost of living. Working-class people were able to own their homes rather than rent. A vibrant consumer culture shaped people’s identities and also furnished a wide array of new goods and services. This was part of the era of the Cold War ideological struggle, and work and employment were touched by it. Women demanded social change in the 1960s, and the structure of families was transformed. Important social programs were introduced that immeasurably improved the lives of working people.

Part IV examines work in Canada in the 1970s and 1980s. The 1970s were a sort of socio-economic interregnum between the 1960s and 1980s, but they still brought substantial change to work and labour. Women became an ever-larger percentage of unionized workers, especially in the public sector. A crucial legislative change in the late 1960s gave federal public sector workers the right to formally unionize and engage in collective bargaining, and that right spread across the provinces, as well.

The 1970s were an important economic turning point for workers of all types. Wage increases gradually stopped providing expanded standards of living. The postwar baby-boom generation graduated from high school and post-secondary education and entered the paid workforce. Media culture continued to include representations of working life.

Part V encompasses the 1990s and 2000s. The pace of change in working life markedly accelerated during those decades. There were major labour struggles, and governments made deliberate policy decisions that did things like deregulate areas of the economy that harmed workers. Canada experienced early globalization, and its economy became even more oriented toward services and away from manufacturing. The Cold War ended during this period, but its demise did not bring significant benefits to working Canadians.

Part VI discusses the period from the turn of the millennium to 2020 and beyond. Canadians approached the end of the 20th century with mixed feelings of anticipation and trepidation. The new century brought enormous opportunity for workers who were well educated and possessed marketable skills but also came with uncertainty and upheaval for other workers. It almost came to seem as if Canada were going back to the pre–Second World War period, with the growing prevalence of non-standard work arrangements.

Work continued to bifurcate along gender, racial, and ethnic lines into the new century. Women did not earn as much as men for doing equal work, and immigrants and people of colour were often relegated to low-wage jobs. Technology permeated virtually every workplace, but it was used for control and surveillance as much as to enhance profitability.

The history of work in Canada has often been tumultuous, sometimes violent, and shaped by technological change. It has shaped society while being reciprocally moulded by it. Work in Canada altered over time and space. It is the product of many different influences, including race, gender, class, ethnicity, and place and is fundamentally about the individual and collective experiences of people who toil at paid and unpaid tasks. As we will see, work in Canada has ultimately never been dull.

Jason Russell offers a fresh and insightful new survey of the history of work in Canada. The book's ambition is remarkable: readers get a grounding in the broad landscape of Canadian history starting from European colonization, and a keen understanding of the repeated transformations of the world of work up to the present. His analysis considers a range of complex social, economic, and political forces shaping work in Canada, including workers' efforts to organize themselves, yet his accessible prose makes the book an enjoyable read for anyone interested in labour and history.

Canada, A Working History is a refreshing take on Canadian history. By focusing on workers and their battles — rather than on the elite running the country — historian Jason Russell tells the story of Canada in a way that is both enlightening and engaging.

Balanced, informative, and insightful, Jason Russell’s Canada: A Working History, provides a comprehensive and compelling survey of the contours of work in Canada from before the colonialist period to the COVID-19 pandemic. The scope and depth of Russell’s work provides anyone interested in understanding the evolution of work in Canada with a narrative that captures the tremendous historical challenges and accomplishments of working Canadians. Accessibly written at a crisp pace and with an engaging style, Canada: A Working History, helps 21st Century Canadians understand the roots of working people’s current predicaments and possibilities — from deindustrialization and precarity to revitalized worker activism and renewed optimism about the future of work in Canada.

From precolonial history (including essential discussions of colonialism and slavery) through to the present-day challenges of technological surveillance of workers, Canada, A Working History is a comprehensive overview of the history of work in what is now Canada. Jason Russell takes care to move beyond a focus on union organizations to include the role of the state, the demands of capital, and the portrayals of labour in various media. Significantly, Russell’s definition of work is not limited to paid labour, which allows him to pay much needed attention to the essential roles of women workers both domestically and outside the home. Canada, A Working History is a useful synopsis for any and all Canadian workers.

An excellent resource, especially for popular readers or as a textbook for early-year undergraduate courses, Canada: A Working History uses changing conceptions of work, working-class experiences, and moments of class-based resistance to illustrate how these factors have shaped and influenced our readings of the country’s past.

Notable for its detail and human scale . .. {Canada, A Working History] looks at current trends and what they might portend for the future of work in Canada.

A welcome addition to the literature . .. Russell's book is not about women's work or even the working class; rather, it offers a panoramic tour of productive human activity in this country, starting with the arrival of Indigenous peoples and ending with today's gig economy.

The strength of this book is its comprehensive coverage of Canadian history, comprising the full span of history for what became modern Canada. .. Cast’s light on the experience of ordinary people, rather than the rich and famous,