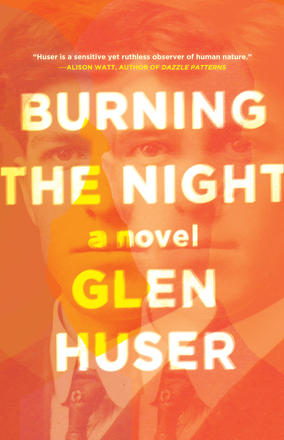 Includes Author-Curated Discussion Questions!
From small-town Alberta, Curtis comes to Edmonton to obtain a teaching degree. There he forms a close friendship with his elderly, blind Aunt Harriet, considered a family pariah due to her eccentric enthusiasm for a lost world of ... Read more

Includes Author-Curated Discussion Questions!
From small-town Alberta, Curtis comes to Edmonton to obtain a teaching degree. There he forms a close friendship with his elderly, blind Aunt Harriet, considered a family pariah due to her eccentric enthusiasm for a lost world of artists and musicians.

When Curtis begins reading aloud to Harriet the diary her intended husband Phillip kept before his death during World War One, an obsessed Curtis examines parallels to his own life: his desire to become a skillful artist and to find fulfilling love.

Timeless and essential, award-winning author Glen Huser's Burning the Night spans across generations and distance, traversing from Vancouver to Halifax, as it bears down on the history of Canadian painting and Curtis's awakening as a gay man.

From his earliest years, Glen Huser has loved to write and read and draw and paint. That's when he wasn't losing himself in the dark cocoon of a movie theatre or picking out old-time radio standards and Broadway musical hits on the piano. As a teacher and school librarian for a lengthy career in Edmonton, he worked his passions for art and literature into school projects such as Magpie, an in-house quarterly featuring writing and art from students. In his off hours, he wrote movie reviews for a local weekly, children's book reviews for The Edmonton Journal, and got his small ink landscapes into galleries. As he worked on a degree in Education and then a Masters in English at the U of A, he had the good fortune to work under the tutelage of Rudy Wiebe, Margaret Atwood and W. O. Mitchell. For several years he was a sessional lecturer in children's literature, information studies and creative writing at the U of A in Edmonton and UBC in Vancouver. His first novel Grace Lake was shortlisted for the 1992 W.H. Smith-Books in Canada First Novel Award. He has written several books for young adult readers including the Governor General's Award-winner Stitches and the GG finalist Skinnybones and the Wrinkle Queen. Short stories have appeared in a number of literary magazines, most recently Plenitude and Waterloo University's The New Quarterly. Glen's current home is Vancouver where he continues to write as well as pursue interests in art and film studies.

Some of the papers, I imagined--those that had not been immediately driven to ground by the black, oily rain--fell, in that odd, unhurried way that airborne papers have, drifting past the blazing islands of debris, fluttering to rest in the grass where moisture fixed and darkened the charcoal lines, the sinuous trunk of a jack pine, the slope of a Toronto roof, the curve of a man's hip. Hours later, when the fires burned in on themselves and the snow came with a white, ashy fury, water hardened into barnacled ice, anchoring the papers so that, when fingers pulled at them, they were released with odd, torn patterns.

Others flew, like strange birds--cream manila, cartridge white, rag grey--into the racing currents of air, the giant exhalation, the gasp. These settled, finally, into nests of cracked porcelain, tumbled brick, kindled wood. Or they became lost in debris-strewn alleys, the yards, the shattered rime of the marsh grass along the beach.

In my mind's eye, I could see the leather case falling with curtains and shards of glass, the tiny bottles and dresser-top jars, a tin coffee pot, that small oil painting on a piece of board. How long did it take for fire to travel through the trail of splintered wood that had been Mrs. McTavish's house? Find the shattered washstand where the case had come to rest? The small portfolio was durable, though, and flames only managed to work their way into one corner before its bonfire underpinnings collapsed and it tumbled into the yard. The drawings tucked within barely damaged, seeming only to have been gnawed at in one corner by a rodent with fire in its teeth.

"I kept it all close by me," Aunt Harriet told me. "The case with its journal, sketches and photographs tucked inside, resting on top of a ragged collection of the drawings people found. You should have heard the nurses complaining that it got charcoal and chalk all over the bedding and my clothing.

"Hospital volunteers, or Mrs. McTavish, when she visited, would do their best to describe their sequence. I thought I could remember the order in which the papers lay. On top were the ones from inside the case only burned in one corner, and then there were a few Mrs. McTavish retrieved from her front yard. The rest? Found by people sifting through debris. Added over several days.

"Of course it was only a matter of time until I accidentally knocked everything over. When the papers were gathered up, I had no way of knowing which was which. The loose ones that people found here and there were in with those that had been in the case. One of the hospital aides offered to iron the most crumpled pieces of artwork for me but I said no, I wanted to be able to feel the ridges, the rips and torn edges.

The odd thing was that, in time, I got to know the shapes of the damage as well as I could remember the drawings and paintings themselves. That one, with a kind of spoon-shape torn out--it's the figure of a soldier, isn't it? I suppose there's not much left of the actual charcoal sketch, but I imagine you can see his hands. Yes, I've been told, I think, his hands, and part of his uniform. That one was found half a mile away. Would never have been picked up, I suppose, if it hadn't been for that little article in the newspaper. Church ladies or Mrs. McTavish would come in and read the papers to me, and, of course, there were stories to fill the pages for months on end. This one, with a crescent moon shape near the top--you might wonder what that is, but I think it's a sketch of driftwood washed up on Kitsilano Beach. "

Along the jagged opening, the twisted branches reach out, dead wood on sand, sand marked with small stains of--what? Blood? Oil? The liver spots of age?

Praise for Burning the Night:
"Burning the Night begins with fire; the blackened sketches and journal pages of an artist fluttering down to become memories. Like these charred artefacts, Huser''s eloquent words become a puzzle on the pages, with pieces of the narrative fitting together to slowly reveal the lives of Aunt Harriet and of Curtis. This is the work of a master storyteller. "
~ Betty Jane Hegerat, author of The Boy
"This is a story of inner and outer sight, of blindness both acquired and enforced on us by society. Huser is a sensitive yet ruthless observer of human nature. "
~ Alison Watt, author of Dazzle Patterns
"Like a vivid shock of red in a sepia photo or the lurid love letter of an historical icon, Burning the Night unshackles the past from our dusty preconceptions, bringing it roaring into the full-colour present with the force of an atom bomb. Painting on a wide canvas of famous Canadian history, Huser perfectly conjures that feeling we get when we see images of our old relatives as young adults and think, 'Wow, they were just like us. "
~ Bruce Cinnamon, author of The Melting Queen